After six years of an uninterrupted sit-in, the inhabitants of Imider in southeast Morocco march to reaffirm their demands. 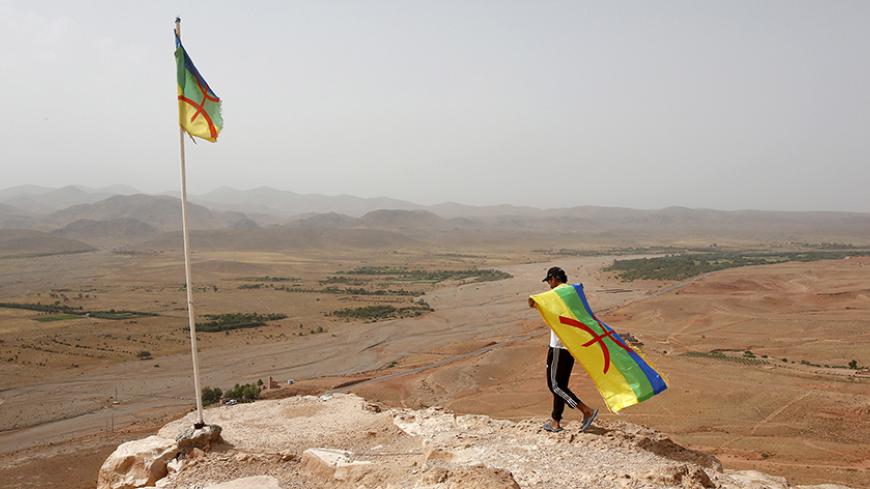 An activist carrying a Berber flag walks on a hilltop above a silver mine, where dozens of poor and unemployed young villagers have been holding a permanent sit-in since 2011, near the town of Imider, southeastern Morocco, Aug. 31, 2015. - REUTERS/Youssef Boudlal

CASABLANCA, Morocco — The inhabitants of Imider — a group of seven villages in southeastern Morocco — marched on Aug. 1 to Mount Alebban, where they have been holding a sit-in for six years to reaffirm the demands of their long and ongoing protest movement.

In August 2011, Imider residents climbed to the top of the 1,400-meter (4,600-foot) hill to claim the right to access the water resources of their region and live in a healthy environment. A few miles away lies the biggest silver mine in Africa, which the residents say ejects harmful chemicals, pollutes their air, water and soil, and uses the already scarce water resources of the region.

The mine is exploited by the Imiter Metallurgic Company (SMI) — a subsidiary of the mining group Managem, part of the National Investment Company, a holding firm mainly controlled by the royal family. Imider activists say they don't benefit from the mine's exploitation and lack the most basic infrastructures such as health and education facilities. They demand that Managem contribute to the development of the region and provide jobs to the inhabitants.

"I am protesting on this symbolic day to reaffirm our demands to Managem, the Moroccan state and the public opinion, and to demonstrate that our sit-in is still going on," Moha Tawja, a business management student and a founding member of the protest movement, told Al-Monitor.

The movement began when 30 university students among a group of 70 who relied on summer jobs at the mine were not recruited to work. While they were protesting for more jobs, a couple of women brought empty water containers and denounced the lack of water in the villages. More women came in, joined by unemployed youths, hastening the creation of the movement. At first, they had agreed to organize a march in September 2011 after the month of Ramadan to protest against the lack of jobs at the mine. But with the water crisis that summer, environmental demands became their focus.

For three weeks, they protested daily, set up committees for dialogue and communication, and voted by Agraw (local assemblies) to organize what was going to become “Movement on the Road '96 (MOR 96),” named in reference to a similar movement in the region violently repressed by authorities in 1996. On Aug. 23, 2011, faced with a lack of response from local authorities, the residents decided to close the valve to the silver mine located on the top of Mount Alebban. They set up a protest camp there and have since built huts, taking turns to ensure the valve remains closed. To this day, although the number of activists present there has lowered and the movement has weakened over time, the sit-in is still taking place.

About 200 people attended the sit-in in its initial stage, but now only about 80 attend, Tawja told Al-Monitor. The marches, which occur every couple of weeks, still attract a great number of inhabitants, he said. About 1,800 out of a population of over 4,000 inhabitants took part in the protest to celebrate the anniversary of the movement on Aug. 1.

The residents had access to water only one hour a day in 2011, Tawja said. But after they closed the valve, the situation went back to normal in their villages. “The water levels went up in the wells of the farms and the khettaras [ancient traditional underground networks]. The farmers have found again the water they need for irrigation. By closing the valve, we have diverted [a great amount] of water for our agriculture. This has had a positive impact on the harvest of olives, almonds, figs, cereals and greatly helped the local economy,” explained Tawja.

Still, he insists activists have not realized any of their demands, which Managem says are not realistic — mainly their requirement that 75% of the jobs at the mine be given to the people of Imider. SMI has not directly responded to the inhabitants' demands, and negotiations with the movement, held between 2011 and 2013, have failed. SMI has nevertheless recruited a few dozen people from Imider at the mine. SMI also supported the creation of irrigation systems in the region and set up youth community projects.

Managem representatives claim they do not dump toxic waste and that the water pipe to the mine doesn't lower water flow to the villages. To prove that their activities comply with international standards, they have asked a Swiss company they say is independent to investigate and review the mine's status each year in order to demonstrate that the activities of the mine do not endanger the inhabitants.

But while Morocco was hosting the 22nd Conference of the Parties 300 kilometers (186 miles) away in Marrakech in November 2016, the women of Imider started to speak out at a workshop with activists from diverse countries facing similar difficulties and voiced their concerns over health problems they believed were linked to the mine's work. They said they had seen a rise in illnesses among recently born babies and birth-related deaths; they spoke of women experiencing irregular menstrual bleedings. Villagers also said they had witnessed the appearance of new respiratory and skin diseases. No medical study has yet confirmed any link between these health issues and the activities at the mine.

Activists stress that their movement has been repressed by authorities and that 33 people have been arrested and jailed for taking part in the movement since 2011. Four are still detained, according to Tawja. Several have been jailed on charges of theft, which activists say are trumped up. One of the most renowned Imider activists, Mustapha Ouchtoubane, has been sentenced to four years in prison for allegedly stealing 18 grams of silver.

Two and a half years in jail have not deterred Omar Moujane, a sociology student and member of the dialogue committee, from continuing to participate in the sit-in. “We are going to resist peacefully until we obtain our rights," he told Al-Monitor. “I want my region to benefit from its wealth.”

Although it has drawn support from activists throughout the country, the Imider movement has remained isolated and has no links to any organization, party or other similar movements that have been created since. However, the activists of Imider have expressed their solidarity with the ongoing Hirak movement in the Rif region. The access to water has progressively become a major focus throughout the country in recent years. Protests have taken place this summer in Khenifra, Zagora and Tinghir, expressing similar demands of access to water and infrastructures.

Abdellah Lefnatsa, a human rights activist and member of the Marxist-Leninist party Annahj Addimocrati (The Democratic Way), drew attention to an increase in social movements with the recent birth of environmental movements. "While these movements express deep and old demands, they have drawn their inspiration from the February 20 movement and more recently the Hirak [movement] in the Rif region," he told Al-Monitor. "[These new protests] are a consequence of the failure of the measures taken since 2011."

According to Lefnatsa, they are the expression of a major social crisis that is not being addressed by authorities and is meant to grow.