As part of the Moroccan authorities' efforts to silence the Hirak protest movement, journalists are facing pressure and repression, prompting questions about their objectivity and the freedom of the press. 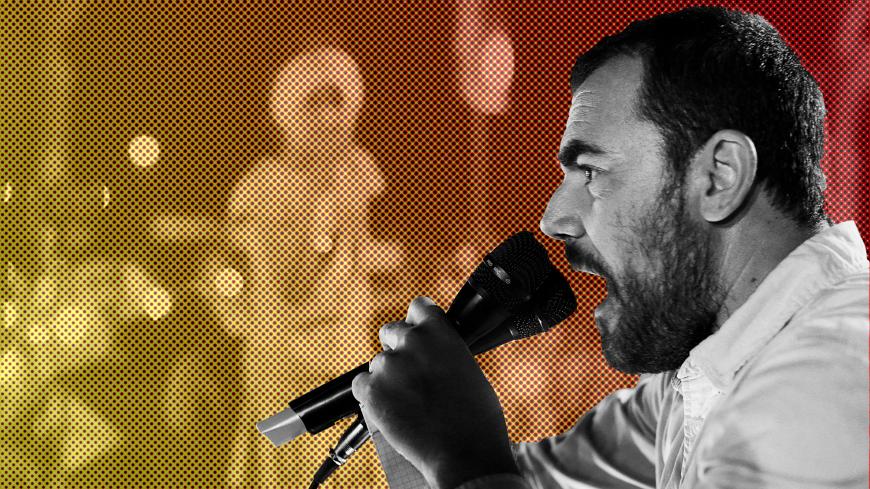 Moroccan activist Nasser Zefzafi gives a speech during a demonstration against injustice and corruption in the northern town of Al-Hoceima, Morocco, May 18, 2017. - REUTERS/Youssef Boudlal

CASABLANCA — Eight journalists have been jailed since the beginning of the Hirak, a protest movement in the Rif region in northern Morocco that started in October 2016 following the death of Mouhcine Fikri, a fish vendor who was crushed to death by a garbage truck as he tried to get to his confiscated fish. Most of those arrested are citizen journalists reporting for local websites covering the protests and therefore targeted by the crackdown the Moroccan authorities initiated three months ago. The Moroccan Association of Human Rights told Al-Monitor that at least 300 people have been arrested since May as part of the authorities’ efforts to silence the movement.

Among those arrested are Mohamed el-Asrihi and Jawad Sabiri of the Rif24 news website, Abdelali Haddou of Araghi TV, Rif Presse photographer Houssein al-Idrissi and Fouad Assaidi of Awar TV. Rabie al-Ablaq, a local correspondent for the Badil Info news site, was hospitalized in early August 36 days into a hunger strike. He is currently detained at the Oukacha prison in Casablanca and treated at the infirmary, according to activists.

Mohamed Hilali, the director of Rif Presse who was sentenced June 30 to five months in prison for “insulting police officers in the course of their work” and “demonstrating without prior authorization,” was the only journalist released as part of King Mohammed VI's royal pardoning of some activists arrested for taking part in the Hirak. His release brings the number of journalists who remain detained to seven.

Hamid el-Mahdaoui, the director of publication at Badil Info, is known for his widely shared videos that spare the government no criticism. He has also extensively covered and supported the Hirak movement. Mahdaoui was arrested July 20 in al-Hoceima, where the movement was initiated. On July 25, he was sentenced to three months in prison and ordered to pay a 20,000 dirham fine (about $2,200) for “inciting a banned protest” and “shouts.”

According to Mahdaoui’s support committee, Mahdaoui as well as the other journalists were charged with criminal offenses and being prosecuted under the Penal Code instead of Morocco's new press law. In August 2016, a new press code was finally passed after years of delay. Although the new press code doesn't include jail sentences like the previous one, it refers to several penal code articles that call for harsh sentences for subjects that are considered sensitive by the government.

Mahdaoui also faces other charges of “failure to denounce a crime threatening national security,” but he has not yet been tried. Mahdaoui faced similar problems in the past. In 2015, he has given a four-month suspended sentence and ordered to pay a fine of 100,000 dirham (around $10,700) to the General Directorate of National Security for his reporting on the death of Karim Lachkar, an activist from al-Hoceima who died under unknown circumstances in May 2014 in police custody.

Foreign reporters have also encountered difficulties while covering the Hirak. On May 28, Djamel Alilat, a reporter for El Watan daily, was arrested in Nador and later expelled from Morocco for working without a permit. Spanish reporters Jose Luis Navazo from Correo Diplomatico, who lived in Morocco with his family for 17 years, and Fernando Sanz Moreno, an independent journalist, were forced to leave the country July 25.

These latest moves are just the latest spike in the years of repression of journalists. After a rise in press freedom at the end of King Hassan II’s rule (in the late 1990s) and during the first years of Mohammed VI’s reign, the Makhzen (Morocco’s state and administration) has progressively silenced independent newspapers through financial sanctions, boycotts and pressure on journalists. Independent newspapers like Le Journal or Nichane, from the Moroccan press' golden age, were forced to shut down in 2010.

“There has been a big regression in the last years. Many journalists were imprisoned for their opinions and writings,” political analyst and education science professor Mohamed Chtatou told Al-Monitor.

Chtatou said, “We are going back to the time of self-censorship. I don't think a journalist can be objective if he is afraid. A lot of newspapers encountered financial losses due to pressure exerted by advertisers. Those who are not following the official line lose their ads and they die.”

In Morocco, journalists are well aware of the taboo issues that must not be raised, including the monarchy, Moroccan sovereignty over the Western Sahara territory and Islam. Although these lines are not precisely determined in any official text, the task of identifying them is left to journalists, who are forbidden to cross them.

While discussion of issues related to the monarchy has become slightly better tolerated, a new line — around the “economic Makhzen,” big names in business close to the monarchy — has recently emerged, said Soulaiman Raissouni, the founder of the Al Aoual website.

Press freedom has recently shrunk, Raissouni told Al-Monitor, with the growing and unclear red lines. Like many other journalists, Raissouni said he has been targeted and criticized by websites known to be close to the Makhzen.

Before he started Al Aoual last year, Raissouni worked at one of Morocco’s main daily newspapers, Al-Massae, where he was sidelined in April 2015 after he wrote an investigative report on the management of the cultural festival of Asilah, which he believes leaders of the municipality disliked. Raissouni said he was not assigned any work for seven months, although he was showing up to work and getting paid.

Like Raissouni, Ali Anouzla was also forced to go online to continue working. In 2010, he launched the Lakome news website, which was shut down in 2013. He has been sued several times for his articles that were deemed disrespectful by the Makhzen. In October 2013, Anouzla published an article that included a link to a blog from the Spanish daily El Pais, which pointed to a video of al-Qaeda in the Islamic Maghreb threatening to strike Morocco. He was arrested for inciting terrorism and spent 39 days in jail. The charges have not been dropped.

Despite the difficulties, Anouzla launched Lakome2 in 2015. In 2016, he was accused of undermining Morocco’s territorial integrity after using the expression “the occupied Western Sahara” in an interview with the German newspaper Bild. Anouzla said back then that he did not use the expression and that it was a translation mistake, which the newspaper admitted to and later corrected.

Through the judicial pressure and absence of clear rules, the Makhzen has succeeded in greatly reducing the space for investigative journalism and forced most journalists and editors to practice self-censorship in order to simply be allowed to work and prevent their publications from closing.

“It's difficult to be totally independent in Morocco. I am independent but I cannot say everything I want. Of course I self-censor,” Raissouni said. “If you want to continue to work as a journalist in Morocco, you have to do that.”