The Moroccan government promotes the country as a model for stability in the region, but its failure to calm months of protests could have serious consequences. 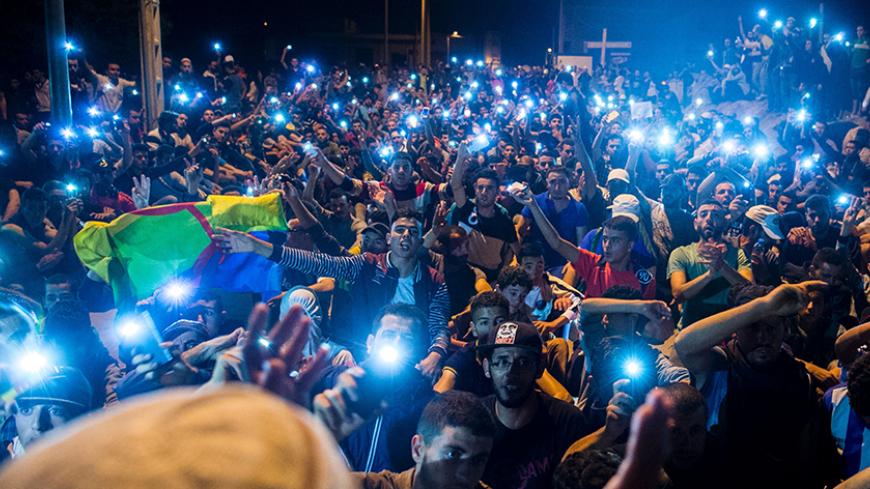 Protesters from Al-Hirak al-Shaabi, or "Popular Movement," chant during a demonstration against corruption, repression and unemployment in Morocco's northern town of Imzouren, June 11, 2017. - FADEL SENNA/AFP/Getty Images

Demonstrations that have rocked Morocco’s northern region of Rif for eight months have worsened of late. With a police crackdown, peaceful protests have turned into violent clashes. Protesters are demanding social and economic justice, fighting what is known as “hogra,” or abuse by police, which deprives citizens of dignity.

The demonstrations started in October at Al-Hoceima, where a fish seller was crushed to death during a dispute with police. He was trying to recover 1,100 pounds of swordfish, caught out of season, that police had confiscated and disposed of in a garbage truck. The man was unable to get out of the truck in time when the compacting mechanism was turned on. Some activists claimed police intentionally ordered the truck driver to turn on the crusher. Authorities deny the allegations.

Thousands of people protested the incident, which caused widespread unrest that grew into Al-Hirak al-Shaabi (the Popular Movement). Activist Nasser Zefzafi, an Al-Hoceima native who accuses the government of neglecting people’s demands, took to social media to mobilize the movement.

He was arrested along with dozens of other activists a few days after he interrupted a Friday prayer sermon May 26 in Al-Hoceima to denounce using religion as a political tool in mosques.

On June 25, during the Eid al-Fitr celebration observing the end of Ramadan, violence erupted. The people of Al-Hoceima — who are still defiant and have become accustomed to taking to the streets — were heavily beaten by police. Pictures and videos of protesters bleeding while rubber bullets were fired have circulated online since then.

Moroccan journalist Imad Stitou, who has been monitoring the public discontent in Al-Hoceima, said, “This is the most serious problem that the Moroccan regime has faced since [King] Mohammed VI came to power [in 1999].” It’s worse, he said, than the 2011 Arab Spring rebellion, known in Morocco as the February 20 Movement.

“I think it is the end of what was known as the new era,” Stitou told Al-Monitor, referring to the peace brought about by the king’s pledge in 2011 to turn over some power to the legislature and create a position for a prime minister.

In 2011, Morocco fared better during the Arab Spring than many neighboring countries. Reforms brought about by constitutional amendments enabled the Justice and Development Party to win parliamentary elections twice to lessen repercussions from the February 20 Movement.

Even so, the Justice and Development Party has been losing its popularity among Moroccans — especially in Rif — because of broken promises that put the government in direct confrontation with the people.

After the recent Eid violence, the king canceled some of his ministers’ annual leaves and announced he was disappointed by the government’s lack of progress on some long-awaited development projects. Later, Prime Minister Saad Eddine El Othmani expressed his sorrow over the latest clashes between police and protesters in Al-Hoceima and revealed what he described as “urgent measures” to execute development projects in Rif.

But the renewed promises might have come too late, Stitou said.

“The recent protests in Al-Hoceima mean the failure of the whole political system. They exposed the weakness of all parties to convince the people, who are directly calling on the top authority, the king,” for relief, Stitou said.

There are concerns that the monarchy will do nothing more than criticize the delayed projects in Al-Hoceima, he added.

Chaima Zoui, an activist from Rif who lives in Rabat, has been working for Al-Hirak al-Shaabi for months. The young activist has little hope that a royal intervention could change things for the better.

“I do not think that the king’s interference has had a positive impact on the people of Rif. They have lost confidence in all state institutions,” she told Al-Monitor.

Though the gap has expanded between the government and Rif's angry crowd, so far the protesters have opted for peacefulness for months despite police provocation and violence, she said.

The government had hoped the Eid holiday would be an opportunity to reconcile with its people, but it was just the opposite. Options are fading, and it’s hard to see any solution coming soon.

The movement’s most immediate demand is the release of all activists, especially Zefzafi.

“There were some who were expecting a royal pardon” for the activists, Zoui said. “But I think that [possibility] was promoted by the [government elite] to test the people’s will to give up their insistence on change.”