What you need to know about Morocco's recent protests

Protests in Morocco are about more than the death of a fish vendor — they are about social and economic justice. 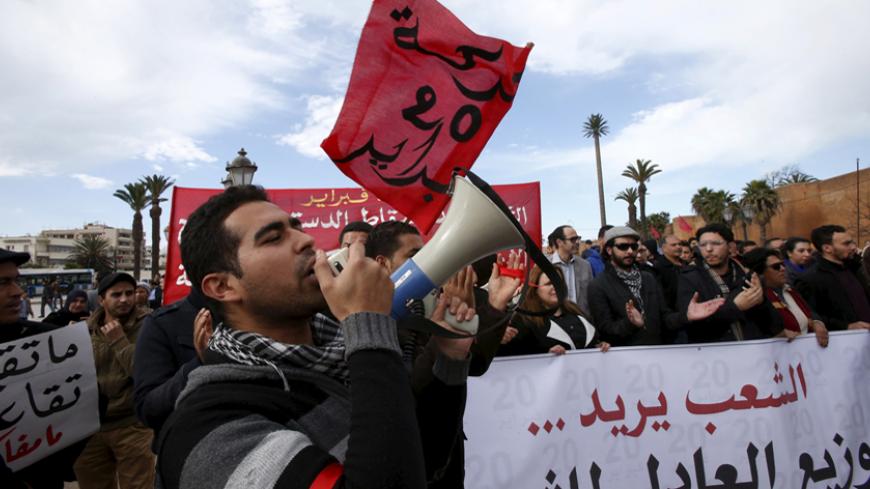 A man waves a sign during a demonstration called by the February 20 protest movement to mark the sixth anniversary of the movement and to demand political reforms and social changes in Rabat, Moroccco, Feb. 20, 2016. - REUTERS/Youssef Boudlal

The death of Mouhcine Fikri, a Moroccan fish vendor who was crushed alive in a garbage compactor while apparently trying to prevent the destruction of a swordfish that had been taken from him in Al-Hoceima, has sparked outrage after a video of the incident was widely circulated Oct. 28. This unleashed a round of demonstrations.

Moroccan authorities said that the 1,100-pound swordfish Fikri had been selling is banned from sale because it had been declared out of season in an attempt to conserve fish stocks.

Authorities have called Fikri’s death an involuntary homicide, and 11 people have been called to appear in court. However, activists say the officer who was next to the garbage truck ordered the driver to smash Fikri when he jumped in after his fish, hoping to save his merchandise. Activists are using a hashtag that translates to #CrushHim.

A journalist who has been associated with the February 20 protest movement has been trying to make waves about the matter.

Abed Samad Ayach of the Lakome news website has been identified as a threat to Moroccan national security with seven other journalists. His trial has been delayed four times and now is scheduled for January. Ayach was the media coordinator for the February 20 movement in Rabat, the capital of Morocco. The movement calls for social and economic justice.

Ayach has talked with some of Fikri’s friends and with some sailors who told him “they did not even know about any rule that bans fishing swordfish and that it is being sold in the market without any restrictive measure.” Ayach said he heard from some activists that swordfish is being exported to foreign countries. He said that even if Fikri knew the ban existed, there were other legal alternatives available, such as holding harbor authorities accountable for allowing Fikri to transport the fish and to bring $2,000 worth of it to sell in local markets.

Ayach told Al-Monitor that he met representatives of the Al-Hoceima fishing union who told him that while Fikri was leaving the port, a police officer called the local security department, whose chief took Fikri to the police station for being in possession of an outlawed fish. A destruction order from the fishing office was issued, and a a garbage compactor truck was sent to destroy 500 kilograms (1,102 pounds) of edible fish. Fikri then jumped in the truck in an attempt to save his merchandise. According to Ayach, an eyewitness said one of the two policemen who were there told the driver to crush Fikri in the compactor.

This tragedy reminded many people of the self-immolation that sparked nationwide protests: A man set himself on fire Dec, 17, 2010, leading to the ouster of Tunisian President Zine El Abidine Ben Ali. Although these events have some things in common — demands for jobs and the democratization of national governance — for Ayach they differ in the democratic context following the Arab Spring. “I do not think that these protests will take the same path as Tunisia,” he said. “Plus, they were spontaneous demonstrations that were not organized under the umbrella of a new movement that has clear goals, which questions the system of governance in Morocco that is largely distinguished by its denial of dignity to its citizens.”

Fikri’s father has urged protesters not to use his son’s case to cause “fitna,” sedition, as Morocco is preparing to host the COP22 UN climate change conference beginning Nov. 7 in Marrakech. But what was remarkable for observers such as Ayach is that Fikri’s family was not allowed to speak to the press before Moroccan Interior Minister Mohamed Hassad’s official visit, which was seen as dictated from Moroccan King Mohammed VI to contain public anger. Therefore, Ayach said, “Such steps were to target Fikri’s family to use it to promote certain claims through the closest people to the victim.” It is noteworthy that Fikri’s father is one of the founders of the Moroccan Justice and Development Party in Al-Hoceima, which won recent elections.

Mohammed called for a thorough investigation into Fikri’s case, although Ayach doubts how effective that probe will be because of prior experiences. “We have had similar cases like Mi Fatiha [in April], who set herself on fire after being humiliated by the chief of Kenitra city and left her children without a provider, and the investigations of Tan Tan floods [in August], which resulted in the loss of several people. Most of these investigations end up being shelved, and the results remain unknown, and those who were involved in crimes are not held accountable. So the Moroccan people do not trust their outcomes.”

Mariam El Maslouhi is a Dutch-Moroccan psychologist who worked in Morocco from 2007 to 2008 and visits multiple times a year. When asked whether Fikri’s case would be the last, she replied, “Morocco is a country that systematically harasses street vendors, who are made illegal in the name of modernity.” She has also expressed dissatisfaction with the monarchy and sees it as a “dictatorship and that parliament does not mean much when there is a powerful Makhzen [a term used to describe the royal establishment] and a royal house where the king decides all political trials.” Maslouhi co-founded the Bades Foundation, which highlights the Rif, a mountainous region of northern Morocco, and its heritage. “The king has gained popularity in the Rif because of new roads and hotels, etc. But at the same time, there is a large group that is openly anti-monarchy.” She also said that she still remembers an activist from Casablanca who said, “The revolution will start from Rif.”

A week after Fikri's death, people held a vigil in Al-Hoceima in protest to demand justice for Fikri, in addition to calling for the Rif people to have equal rights to natural resources.