Israelis and Palestinians both feel that President Donald Trump and his administration have abandoned his ambitious peace initiative with his focus more on internal affairs. 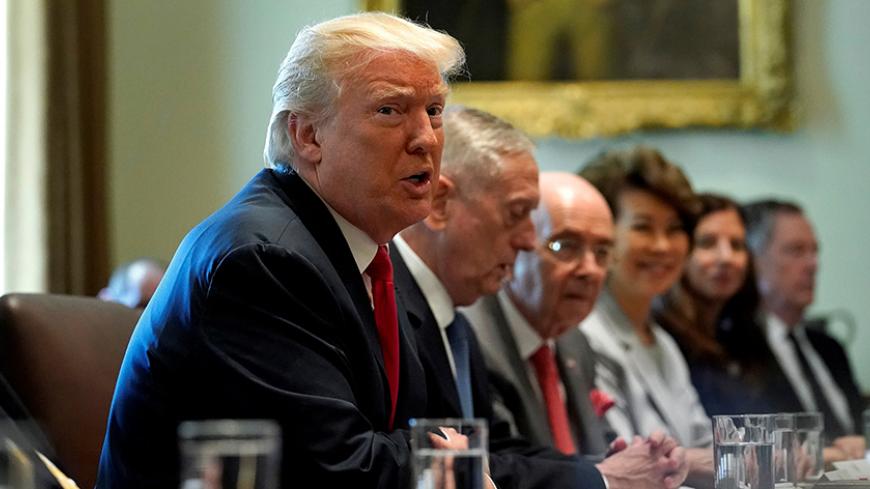 US President Donald Trump speaks during a Cabinet meeting at the White House in Washington, July 31, 2017. - REUTERS/Joshua Roberts

By now it is obvious that the "ultimate deal" between Israelis and Palestinians, which President Donald Trump promised in his first days in office, was little more than an optical illusion. A series of conversations with Israeli, Palestinian and diplomatic sources depicts a very different picture. The diplomatic process is bogged down. President Trump is not involved in any way, nor does he have any interest in getting involved. Palestinian President Mahmoud Abbas is severely disappointed with the United States, and the US "peace team" has lost what limited credibility it had on the Palestinian side. Meanwhile, Prime Minister Benjamin Netanyahu's right-wing government is rubbing its hands eagerly beneath the table and dismissing all the serious concerns that sullied the mood of the past few months. Nothing will happen, because there is nothing there, ministers from the Likud and HaBayit HaYehudi whisper with smug satisfaction. We can all calm down.

The story that best illustrates this situation occurred last week when the Temple Mount crisis threatened to ignite the entire Middle East in a global conflagration originating in the Al-Aqsa Mosque. Throughout that entire crisis, the US administration was effectively AWOL. Although they attempted to take credit for some deep involvement in efforts to reach a solution, the truth is that the Americans were not a significant factor during the harshest days of the crisis, when it looked like the entire Middle East would spiral downward into a new round of violence.

President Trump himself was not involved in events as they unfolded. His special envoy, Jason Greenblatt, lost his standing as an "impartial mediator" in the very first days of the crisis. One senior Palestinian source told Al-Monitor on condition of anonymity that "Greenblatt picked a side and represented Netanyahu throughout the crisis." According to a senior Palestinian source who spoke on condition of anonymity, the Americans adopted the Israeli government's positions at every stage. "When the metal detectors were installed, they supported that. Then they supported the installation of smart cameras, and then, when there was talk of manual checks, they supported that too."

The Americans' behavior throughout the crisis only furthered the feeling prevalent in Ramallah over the past few weeks that Greenblatt and Jared Kushner are irrelevant. "It's not a nice thing to say," another Palestinian source told Al-Monitor on condition of anonymity, "but they are both ardent supporters of the settlements. They are completely unfamiliar with the other side, they don't understand the region and they don't understand the material. You can’t learn about what is happening here in a seminar lasting just a few weeks."

At one point, matters reached a head. In response, Abbas decided to send Greenblatt for an intimate conversation with his close adviser, Saeb Erekat, and the head of Palestinian intelligence service, Majid Faraj, considered to be the most powerful person in the West Bank. A senior Palestinian diplomatic source speaking on condition of anonymity described the talk as a "reprimand." He said, "Greenblatt received a very firm explanation about the way things stand. He was told to go back to Netanyahu and tell him to remove everything that was installed on Temple Mount. 'There is no other solution, nor will there be one,'" Erekat and Faraj told him.

A top Palestinian source claimed that Greenblatt displayed utter ignorance throughout the entire incident, failing even to understand the various sensitivities pertaining to the Temple Mount. Once the Palestinians explained their positions, he began to look pensive. At times he expressed surprise and amazement. At some point he even admitted to them that he wasn't aware of some of the information that was relayed to him.

Conversations with the Israeli side offer a similar account, though this came from a completely different perspective and worldview. A senior Israeli political figure admitted to Al-Monitor on condition of anonymity that, "As of now, Trump's peace initiative looks like it is completely bogged down." He added, "The Palestinians have lost trust in the peace negotiations teams. Greenblatt is rapidly approaching the status of persona non grata, just like Ambassador to Israel David Friedman and UN Ambassador Nikki Haley. The president is not involved, and it looks like he has distanced himself considerably from Middle East affairs, particularly given the serious problems he has inside the White House."

Israeli sources involved in the issue say that Greenblatt continues to apply heavy pressure on Israel to make gestures and take steps to improve the daily lives of Palestinians. Then they say that nothing will come of this.

At one time, the predominant feeling in Ramallah and Jerusalem was that President Trump himself was committed to reaching a historic agreement. He was thought to be willing to step outside the box and do things never before done in the region. That feeling has since faded into oblivion. "As of now, Trump has lost any credit that he had managed to amass in the Middle East," said one senior Israeli source on the condition of anonymity. A top Palestinian source also speaking on condition of anonymity added, "Even the automatic sense of awe that people once had of him is not what it used to be. The more time passes, the more it becomes clear that he is a paper tiger focused on internal affairs and incapable of mustering up the inner strength necessary to reconcile Israelis and Palestinians."

A senior Israeli minister speaking on condition of anonymity added, "The Americans aren't really a presence here. They let us do whatever we want. They don't set the tone, and they don't dictate the agenda."

Ostensibly, this near freedom of action should be the dream of the Israeli right. But even among them, people are beginning to express their concern about how things are unfolding. "This was as clear as can be during the Temple Mount crisis. There was no responsible adult in the mix. There was no sheriff on the ground. The Americans gaped in amazement at what was happening there. Every so often they'd pick up the phone, but they had no real influence on the course of events that happened, and they saw that. The situation is dangerous, perhaps even unprecedented," a source on the right told Al-Monitor on condition of anonymity.

Two other disconcerting facts should be added to this mix. The first is news making its way across Israel about the declining health of Abbas. The second is the fact that during his talks with the American team working on the peace process, Netanyahu brought up an old plan suggested long ago by Defense Minister Avigdor Liberman for a territorial and population swap. In it, Israel would hand over land populated by Israeli Arabs — mainly in the Wadi Ara northern region — in exchange for the annexation of the settlement blocs. Liberman's idea is considered a clear "nonstarter," even if there is a certain healthy logic behind it. Anyone who brings it up knows that the Palestinians will immediately reject it out of hand, while Israeli Arabs will be outraged by it. It is now thought that the main reason Netanyahu brought up the idea in the first place was to intensify the sense of embarrassment felt by the Americans and to provoke maximum opposition from the other side.

As of now, the Palestinian-Israeli conflict has been left to its own fate. Abbas is at the end of his rule, the Americans are focused on other hotspots around the globe and Israel's right-wing government has no meaningful checks and balances in place. Taken together, this is a recipe for serious problems down the road.