Israel is looking into the increased flow of donations from Turkey into Muslim groups active on the Temple Mount. 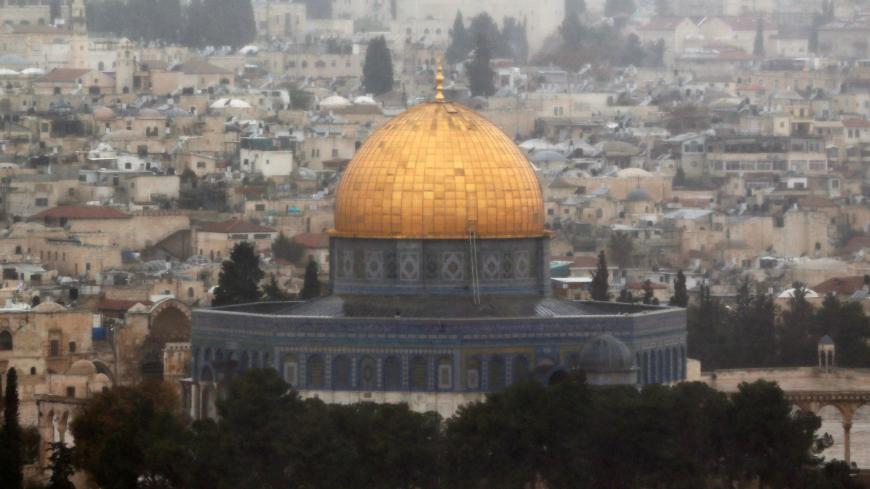 Birds fly on a foggy day near the Dome of the Rock, located in Jerusalem's Old City on the compound known to Muslims as the Noble Sanctuary and to Jews as the Temple Mount, Jerusalem, Jan. 2, 2018. - REUTERS/Ammar Awad

Israel and Turkey are again on a collision course. The official reason, at least this time, is not the blockade on Gaza or the diplomatic peace process with the Palestinians, but the Temple Mount. Israel’s Security Cabinet is supposed to devote one of its upcoming meetings to the activities and growing influence of Turkish President Recep Tayyip Erdogan on the Temple Mount. Erdogan maintains this influence via a series of nonprofit associations that he funds, headed by the Turkish Cooperation and Development Agency (TIKA).

Turkish activity on the Temple Mount worries not only the Shin Bet, the Israel Police and the entire security system, but even the other contenders for the plaza: the Jordanians, the Palestinians, the Egyptians and even the Moroccans who view their king, Mohammed VI, as the keeper of the holy places. According to intelligence material that Israel has been accumulating, Erdogan is trying to snatch the Temple Mount and the title of “Protector of the Mount” in the name of all of Islam from all the other contenders to the throne. The first antagonist that is supposed to foil these schemes is, like always, Israel.

After the 2016 reconciliation between Israel and Turkey, in which Israel shelled out $21 million as compensation to the families of the people who were slain on the Mavi Marmara and expressed an apology, the tense relations between the two countries improved somewhat. The ambassadors returned to Ankara and Tel Aviv, and it had seemed that the crisis had passed. But ahead of the June 2018 elections in Turkey, Erdogan began to attack Israel in louder and louder tones. “He needs to divert the agenda of his election system from the crash of the Turkish lira to some external scapegoat. And, of course, he found us,” said a senior Israeli Cabinet member to Al-Monitor before the elections, on condition of anonymity. But the elections came and went, and Erdogan continues to grasp the crass anti-Israel ticket with all his strength.

“He continues to throw tantrums,” a high-placed security source told Al-Monitor this week on condition of anonymity. “His self-confidence has reached an all-time high; he now views himself as a Turkish sultan, ready to renew the Ottoman Empire. Nothing can stop him, and he allows himself everything. But if he tries to tighten the rope too much in Jerusalem,” the source added, “he will discover his mistake.”

On July 9, Israel’s National Security Council presented an action program formulated against the associations connected to Turkey that contribute to inflaming tension and agitation on the Temple Mount. Most of the focus is on TIKA. Recently, intel on this organization shows that it maintains widespread connections with the radical northern wing of Israel’s Islamic Movement as well as with Hamas sources. According to a publication by researcher Pinhas Inbari, a member of the Jerusalem Center for Public Affairs, TIKA is directly linked to the IHH Turkish organization that backed the Marmara flotilla and was labeled by Israel (and others) as a terrorist organization.

There’s even more. According to Israeli intelligence sources, TIKA pours dozens of millions of shekels, or even hundreds of millions of shekels according to some versions, to fund Islamic activities on the Temple Mount (a shekel is worth about 27 US cents). “Anyone who visited the Mount in the last year, knows that the place is full of Turkish flags and also Turkish tourists as well,” an Israeli security source well versed in Eastern Jerusalem issues told Al-Monitor on condition of anonymity. “These are not mere tourists,” the source continued, “but Islamic activists who flow to the Temple Mount to replace the Mourabitoun and Mourabitat associations that Israel recently made illegal.” These associations have harassed Jewish visitors to the Temple Mount and were banned following accusations of inciting violence.

The Israelis are convinced that Erdogan is trying to return Ottoman grandeur to the Temple Mount to intensify tension between Jews and Muslims in the holy places and become the top Islamic figure to protect the mosques and Al-Aqsa. “We won’t let this happen, no way,” an Israeli security source said on condition of anonymity.

Israel’s Foreign Ministry, which objected to the action plan created against TIKA until recently, is now conforming to the party line and admits that there is no choice but to halt the process before it causes real damage. Israel expends a lot of energy in lowering tensions on the Temple Mount, and officials are acutely aware that a blowup there could quickly put the entire Middle East on fire. It was only on July 3 that Prime Minister Benjamin Netanyahu canceled the sweeping prohibition he had imposed on Knesset members from frequenting the Temple Mount. From now on, all Knesset members are permitted to ascend the Mount (but not pray there) once every three months. The wave of individual Palestinian terror that began more than two years ago, and has since died down, had emerged from the firebrands of Al-Aqsa. And Israel is determined to halt that.

“We’re not the only ones,” a senior Israeli political figure told Al-Monitor on condition of anonymity. “People from Amman and other places share our worry over Turkey’s growing influence on the Temple Mount. No one, except for Hamas, approves of Erdogan making inroads into our region. We have no intentions of making his life easy with regard to these issues.” Israel cannot make TIKA illegal, since it is not listed in Israel. But Israel can require the association to receive prior authorization for every activity it performs in the territories over which Israel rules. “The quantities of money they pour here are huge,” a senior Israeli diplomatic source told Al-Monitor on condition of anonymity. “Even the number of Turkish tourists has recently risen significantly. These are the kinds of Islamic tourists who pour into the Temple Mount and on the way try to raise as many riots as they can, complete with curses and swearing and invectives in the old Jerusalem Armenian Quarter.”

At the moment, a plan of action that was formulated to counter Erdogan’s increasing influence on the Temple Mount has not been approved for implementation. As aforementioned, the Cabinet is supposed to discuss and authorize it. “We will closely examine Erdogan’s actions in the coming weeks,” a high-placed source in the Israeli Cabinet said on condition of anonymity. “If he signals to us that he wants peace, that’s one thing. But if it turns out that the 'new,' post-elections Erdogan wants to stir up trouble, he’ll find a very tough opponent on our side.”

“The Turkish Consulate in East Jerusalem is viewed as a wasp’s nest. It inflicts more damage than it helps,” a high-level Israeli diplomatic figure told Al-Monitor on condition of anonymity. “If Erdogan wants to get his foot in the door again [in Israel], he has to lower his tone and return to the rules of acceptable behavior.” But no one in Jerusalem really believes this will happen. It seems that Erdogan wants escalation, not peace.