Palestinians work for Abbas-Trump meeting next

After positive meetings with CIA Director Mike Pompeo, the Palestinian leadership believes it is in the interest of President Donald Trump to also hear the Palestinian side of the story. 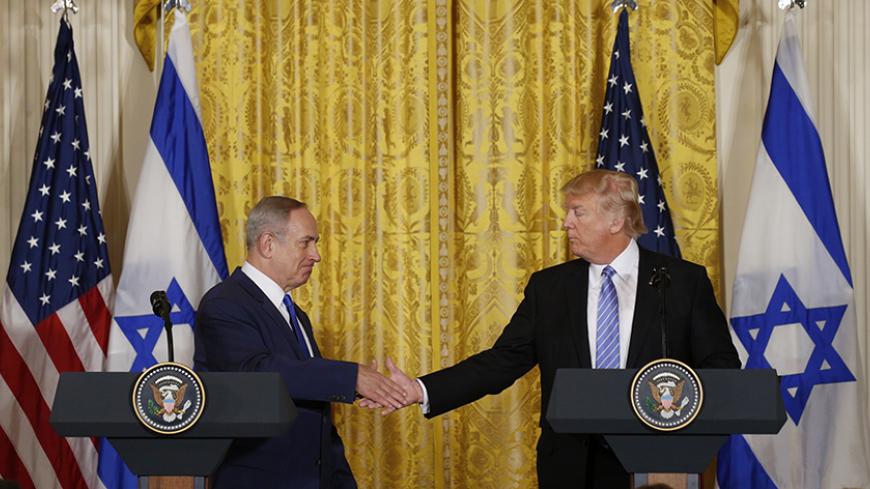 The mood among Palestinians surrounding President Mahmoud Abbas wavers between desperation and hope and between cautious optimism and dire pessimism. They were beginning to feel like they were having some success with a policy of “quiet, smart diplomacy,” as top Palestinian officials described the initial feelers they sent out to the Donald Trump administration. Trump's comments on Feb. 15 therefore left them stunned. At a White House press conference with Israeli Prime Minister Benjamin Netanyahu, Trump surprised the Palestinians, saying, “I’m looking at two-state and one-state. I like the one that both parties like. I’m very happy with the one that both parties like. I can live with either one.”

In a conversation with Al-Monitor, a Palestinian security official said that it will take a long time for the Palestinians to unravel what they consider to be Trump's conflicting messages, the balance of power in the new administration and the overall mood regarding just about everything having to do with the Palestinian-Israeli conflict. “One day he's for the settlements, the next day he says that they don't contribute to peace. One day he's moving the embassy to Jerusalem, and then he says that he hasn't decided yet. This leaves us walking carefully between the raindrops,” he said, speaking on the condition of anonymity.

Concerns that the United States no longer regards the principle of a two-state solution as sacrosanct, as the only basis for an agreement with the Israelis, have been raised in every discussion among the Palestinian leadership since Trump's election. At the same time, however, the Palestinians also believe that the new administration realizes that it cannot act rashly and impetuously when it comes to the Palestinian-Israeli conflict. Instead, it must follow in the footsteps of previous administrations, with certain adjustments to reflect Trump's personal approach.

The Palestinians were feeling optimistic after a series of discussions that Majid Faraj, head of the Palestinian Security Services, had in Washington the second week in February and a meeting between Abbas and CIA Director Mike Pompeo Feb. 14 at Palestinian Authority (PA) headquarters in Ramallah. It seems that Faraj had persuaded Pompeo to visit Abbas in his office without the prior knowledge of the Israeli Foreign Ministry. In a meeting in Washington, Faraj had told Pompeo that he should meet with the Palestinian president so that he could hear for himself how serious and determined the Palestinians in general and Abbas in particular really are about reaching a final settlement with Israel.

Words like “responsibility” and “determination” are recurring motifs in communications between senior Palestinian officials and their counterparts in the US administration, whether in direct talks or in messages delivered through Arab leaders, among them King Salman bin Abdul-Aziz Al Saud of Saudi Arabia and King Abdullah II of Jordan. The word “responsible” is used to highlight the PA's security accomplishments over the last decade, since the creation of the “Dayton Force,” maintaining order in PA-controlled territories in both civilian and security affairs with the support and funding of the United States. “Determination” refers to the Palestinians' desire to reach a fair and equitable peace agreement with the Israelis, with the understanding that the Palestinians will also have to compromise on various contentious issues.

The Palestinian source told Al-Monitor, “Our goal is to have the US president meet with Abbas following his meeting with Netanyahu, because there are two sides to every coin.” He then added that it is obvious that the Palestinians have no alternative to face-to-face meetings. “There can be no fair mediator, no matter who it is, if both parties don't have an equal opportunity to explain themselves and present their positions, including their capacities and their limitations.”

So, for example, Pompeo and Abbas' meeting at the Muqata can be attributed to the personal connection and chemistry that developed between Faraj and Pompeo. The same Palestinian source claimed that the two men developed a rapport after Pompeo showed interest in Faraj's personal story. Faraj, a resident of the Dheisheh refugee camp, lost his father in Israeli fire during the second intifada, while he himself spent time in an Israeli prison. Nevertheless, he is now an avid supporter of security cooperation with Israel. Palestinians feel that Faraj's story personifies how far the Palestinians have come, from support for armed struggle against Israel to security collaboration that has resulted in shared security achievements under Abbas.

At the Ramallah meeting, Saeb Erekat, general secretary of the Palestine Liberation Organization's Steering Committee, asked Pompeo about the Trump administration's position regarding calls in Israel for annexation of the occupied territories and dismissal of the principle of a two-state solution. According to one Palestinian source, the CIA director did not offer a decisive answer, leaving the Palestinians to conclude that the Trump administration was still learning the intricacies of the conflict. In other words, it had not yet formulated a plan of action or a diplomatic program. This, in turn, led to the conclusion that since there was no plan, the Palestinians had nothing to worry about in terms of US policy, which has been based on a two-state solution, that is, the creation of a Palestinian state alongside Israel.

Abbas, Erekat and Faraj perhaps sighed in relief after Pompeo left the Muqata. As far as they were concerned, they had succeeded in the best way possible in delivering their message, which was that it is in the United States' interest to coordinate with them, and most of all, to hear their side to avoid fostering the kind of chaos that could lead to terrorist acts by extremists in the region.

That all changed when Trump met Netanyahu. Yet despite top Palestinian officials' shock, frustration, and anger at Trump's remarks, they decided to stick with quiet, restrained diplomacy. Erekat released a terse statement saying that a single state would result in apartheid and that a two-state solution is the only alternative that will protect the rights of Muslims, Christians and Jews alike.

It is probably safe to assume that if the US administration were less intimidating and less unpredictable, Erekat would have worded his response differently. Given the situation, however, the PA's leadership is interested in one thing only — a meeting at the White House between Trump and Abbas as soon as possible. The question is whether Pompeo will be able to convince the president that such a meeting is essential or whether powerful forces surrounding the president will send him off in a different direction.