Abbas ready for visit to Washington

While there has not been a firm date set for Palestinian President Mahmoud Abbas' visit to Trump's White House, Palestinian officials are busy preparing for an opportunity to restart the peace process. 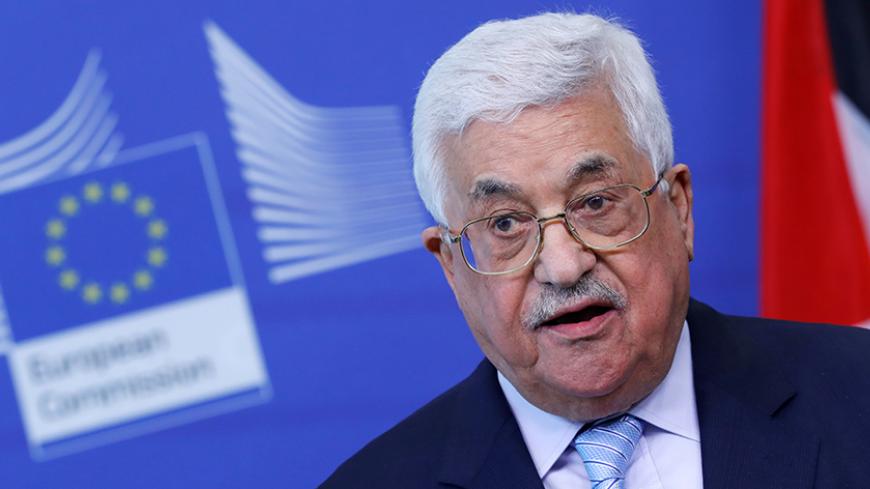 Palestinian officials are working hard to prepare for the first meeting in the White House between Palestinian President Mahmoud Abbas and the new US president, Donald Trump. After an initial phone call and a high-profile Feb. 15 meeting between Trump and Israeli Prime Minister Benjamin Netanyahu, Palestinians were worried that the Trump administration was planning to bypass the legitimate Palestinian leadership. Trump's meetings with King Abdullah of Jordan and phone calls to several Arab leaders added to this concern.

The Ramallah-based leadership wasn’t too worried, because from day one the Trump administration had initiated security- and intelligence-level meetings. Majed Faraj, head of the Palestinian Intelligence service, met with US officials in Washington on Feb. 8-9; on Feb. 14, the director of the CIA, Mike Pompeo, made a surprise visit to Ramallah to meet with the Palestinian president. The meetings most likely dealt with security issues.

When the Trump-Abbas phone call was finally initiated March 10 and Trump invited Abbas to the White House, Palestinian officials let out a sigh of relief. Palestinian media hailed the breakthrough, and preparations were put in place to prepare for a meeting sometime in April.

While the phone call and invitation were welcomed, the concern about the Trump administration bypassing the Palestinians and making a deal with Arab leaders persisted. Media reports and rumors talked about a potential watering down of the 2002 Arab Peace Plan and the possibility of a regional Arab meeting that would downgrade Palestinian representation.

Most of these worries, however, were unfounded, and the Arab Summit held on the Jordanian side of the Dead Sea delivered one of the summit's strongest statements in support of Palestinian statehood, opposing settlements, defending Al-Aqsa Mosque, reinstating commitment to the two-state solution and repeating support for an unchanged Arab Peace Plan.

Palestinian journalistic sources tell Al-Monitor that Ramallah was generally happy with Trump's meetings this month with Egyptian President Abdel Fattah al-Sisi and with Abdullah in that the Middle Eastern leaders relayed honestly and fairly the decisions of the March 29 Arab Summit in Jordan.

For its part, the Palestinian leadership instituted some changes. Abbas appointed Western-educated Husam Zomlot as the head of the PLO mission in Washington. Zomlot, who was recently elected to the Fatah Revolutionary Council, is a confidant of Abbas and has received high marks for his ability to articulate the Palestinian narrative to American audiences generally and to American Jewish audiences specifically. Zomlot arrived in Washington in March, began his new job April 1 and has been entrusted with the preparations for Abbas’ upcoming visit.

The lack of a firm date has led some Palestinian media to report that the visit has been postponed, but a US White House source quickly shot down this rumor, insisting that the visit is still on.

While the Palestinian leader’s visit to Washington is to focus primarily on the peace process and the efforts of Trump’s peace envoy, Jason Greenblatt, to kick-start the talks again, it is expected that Abbas will also deal with several bilateral issues. These include security cooperation and intelligence exchange between the United States and Palestinian security on local, regional and international areas of mutual concern, and continued political and financial support by the Trump administration to the Palestinian people and government, sources in the Palestinian leadership told Al-Monitor.

While stressing that economic cooperation plays a supportive role given the dire economic situation in the Palestinian territories, Greenblatt was quoted in the Israeli daily Haaretz on April 4 as saying that an economic solution is no substitute for a political solution.

Israeli columnist Alex Fishman, writing in the leading Israeli daily Yedioth Ahranoth on April 14, noted that the Trump approach to the Palestinian-Israeli conflict is much more attuned to America’s regional interests. Fishman believes that Trump is being influenced by three generals in his administration who believe that solving the Palestinian conflict is necessary to help win the war against extremism in the region. The three key generals in the Trump administration are Secretary of Defense Jim Mattis, national security adviser H.R. McMaster and Homeland Security Secretary John Kelly.

Palestinian and Israeli officials are unusually quiet about what is happening behind closed doors. While Israelis appear to be missing the Obama days and are worried about Trump’s foreign policy, it is too early to tell if the Trump administration would be any less biased toward Israel than previous US governments.

The upcoming meeting between Abbas and Trump will put into place the key parameters that will decide whether peace talks will in fact be renewed and whether they will have any chance of reaching the desired results.