Israelis and Palestinians have reached a water supply agreement, though some worry such economic deals might become a poor substitute for a true peace settlement. 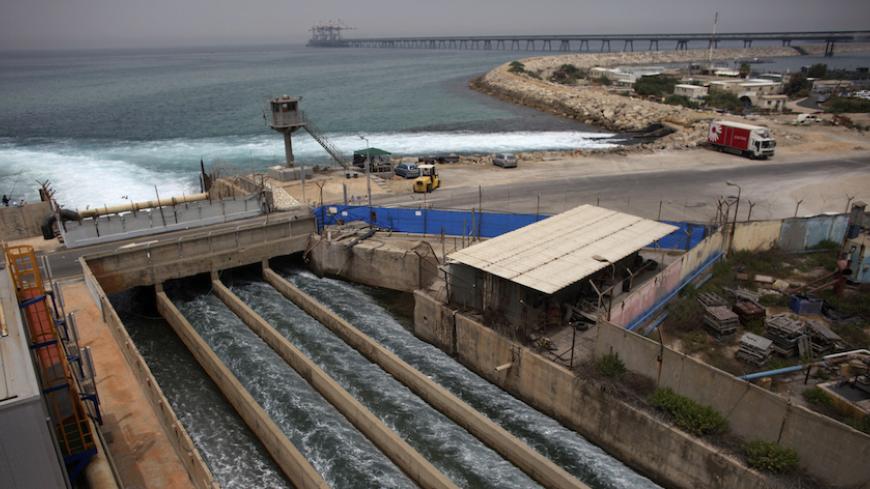 Briny water flows into the Mediterranean Sea after passing through a desalination plant in the coastal city of Hadera, May 16, 2010. - REUTERS/Nir Elias

RAMALLAH, West Bank — The Palestinian Authority (PA) and Israel have reached a tentative water-sharing deal with the help of the United States. Though officials expect a final agreement within weeks, some Palestinians worry the pact will give Israel more leverage over them and say they are already entitled to the water.

The PA and Israel launched talks about the agreement in August 2015, but the latest deal was only reached after the two parties overcame price hurdles, Palestinian Water Authority President Mazen Ghoneim said during a press conference July 18 in Ramallah, which Al-Monitor attended.

The deal is expected to help alleviate the current water crisis in the Palestinian territories, but it will not solve the problem, Ghoneim said. “The crisis will not be over unless Israel’s occupation ends and we get our water rights in the three underground basins that Israel controls,” he added. Water is one of the issues included in the 1993 Oslo Accord, which said Israel must recognize the water rights of Palestinians.

The final agreement on water between Israel and the PA is expected to reinforce US efforts to resume peace talks between Israelis and Palestinians. But Ghoneim denied any link. “The water that will be given to us as part of the deal is our right because we are on the coast of the Dead Sea. This has nothing to do with negotiations on a final [settlement] with Israel,” he said.

Greenblatt has said US President Donald Trump has "made clear that working toward a lasting peace agreement between Israel and the Palestinians is a top priority for him."

Although the final water agreement has not been signed yet, Ghoneim said Israel started pumping 6,000 cubic meters of water daily to the Halhul reservoir in the southern West Bank through Israel's water carrier on July 18. The reservoir's capacity is 25,000 cubic meters.

Ghoneim noted, “To implement the agreement that is to be signed, Israel must set up the Palestinian infrastructure for the project to establish new water transfer pipelines and reception centers for water from Israel and centers to distribute water to provinces. This would cost around $80 million, which the donor countries would grant.”

It will not take long for Gaza to reap the fruits of the project. Ghoneim said, “The Palestinian Water Authority teams have started working in Gaza to receive the allocated water quantities, as 5 million cubic meters of desalinated water must reach the Gaza Strip by the end of 2017, and the rest will be delivered later.”

The water deal is the latest step in economic cooperation between Israel and the PA under US sponsorship. Israeli Minister of Energy Yuval Steinitz and Yoav Mordechai — coordinator for government activities in the territories — joined Palestinian Prime Minister Rami Hamdallah at the July 10 opening of a power station in Jenin in the northern West Bank. Through this station, the Palestinian Energy Authority will buy electricity from Israel and distribute it as part of the PA’s efforts to build and develop a Palestinian power market.

In addition, the newly negotiated agreement is tied to the 124-mile Two Seas Canal project to transfer water from the Red Sea to the Dead Sea, which is drying up, losing about 4 feet of its depth per year. Jordan, the PA and Israel signed a memorandum of understanding in 2013 for the project. In February 2015, Jordan and Israel agreed to install a water desalination plant on the Red Sea.

"The Two Seas Canal is a regional cooperation project that Washington, Japan and European countries are supporting and sponsoring. We will make sure it includes binding clauses for Israel," Ghoneim noted.

Greenblatt said at a July 13 press conference in Jerusalem — during which he announced the water-sharing deal — that the new pact is a pivotal step for the Two Seas Canal project.

Nasser Abdul Karim, an economics professor at Birzeit University, contends that Israel wants joint economic projects because they embody Israeli Prime Minister Benjamin Netanyahu’s vision and economic peace program. Netanyahu believes that peace is achieved through the economic sector rather than through ending the conflict. He seeks to barter economic arrangements for political concessions.

“Israel does not seek material profit from its economic relations. It rather seeks to preserve its security and political superiority [over the PA]. Israel is ready to establish economic ties with the PA and alleviate economic restrictions as long as the [economic cooperation] does not undermine Israel’s envisioned solution and does not allow the PA to have economic control and sovereignty," Karim told Al-Monitor.

“The projects that were recently declared, such as the power-transfer station or the water deal, entrench the Palestinian territories’ economic subordination to Israel and do not reflect any sort of Palestinian sovereignty," he added.

Strengthening joint economic ties between Israel and the PA seems surreal to some. These relations are fragile and might fall at any moment into a political deadlock, making it impossible to achieve the two-state solution and ensuring the absence of Palestinian sovereignty in these projects, which Israel controls. Many Palestinians are wondering: Who can guarantee these projects would endure if a Palestinian uprising were to break out, as happened in 2000?