Water resources in Palestine are threatened, and in the absence of an outline for a tangible agreement with Israel, the future does not look promising. 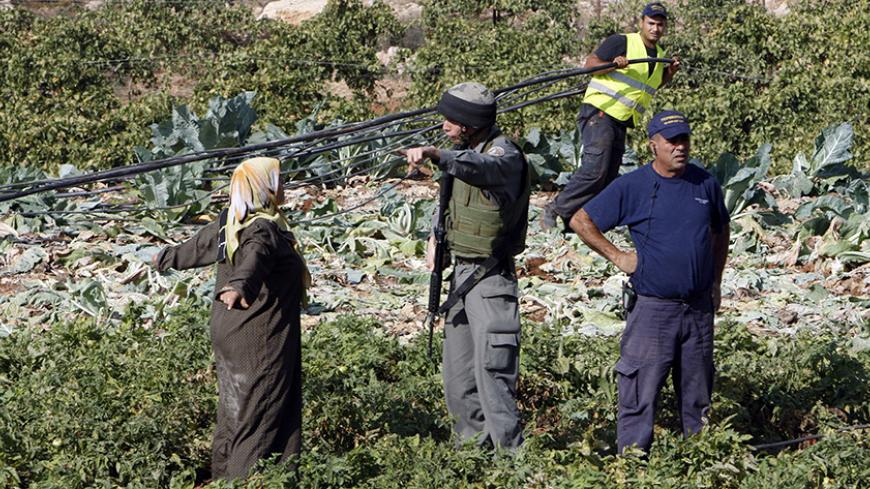 The Palestinians did not forget to celebrate World Water Day on March 22, whose theme for this year was “Water and Sustainable Development.” They dedicated this day to evaluate and assess their water situation, in light of the Israeli control over the water resources. The Palestinian Water Authority (PWA), in cooperation with environmental and aquatic associations and centers, in addition to Palestinian and international water experts, dedicated this day to assessing the situation of Palestinian water — under Israel's control of water sources — through seminars, workshops and conferences.

Twenty-one years have passed since the Oslo Accord and the referral of the water matter to what has become known as final-status issues, which have not yet been discussed. These issues include Jerusalem, the refugees, the states, borders and security, the settlements and water. However, the question remains: What do Palestinians have left of their water rights?

Israel started controlling water resources in 1948, and began impeding the development of wells and water springs, in addition to exploiting the existing resources for the benefit of settlements and agricultural purposes at the expense of the Palestinians. In the mid-1960s, Israel began exploiting the water of the Jordan River basin that feeds the Dead Sea and diverting the water to private settlements in Negev settlements south of Palestine through the National Water Carrier; it also drained Lake Hula in northern Palestine. After Israel's occupation of the Golan Heights, the West Bank and Gaza Strip in 1967, Israeli control over water resources increased. This happened through preventing drilling, bridging springs and refraining from issuing licenses as the governing authority until it controlled 90% of Palestinian water resources using military orders and laws. The water issue was moved to final-status negotiations within the framework of the Oslo Accord due to its importance and complexity. Phase I (Declaration of Principles) of the accord, which was set at five years, included the transitional arrangements for the establishment of a self-governing interim Palestinian Authority (PA); this was to lead to a permanent settlement in order to deal with the six key issues the parties agreed to move to final-status negotiations five years from the signing of the accords.

The future of water in Palestine does not look promising and might be headed toward a catastrophe in the coming years, especially in the Gaza Strip.

PWA Minister Mazen Ghoneim told Al-Monitor, on the sidelines of the World Water Day celebration in Ramallah on March 26, “The water situation in Palestine is very complex in light of Israel’s control over 90% of water resources, in addition to its refusal to increase the amount of drinking water sold to Palestine since 1995, which totals up to 52 million cubic meters, for $55 million.”

“The biggest water catastrophe on earth is in the Gaza Strip, as 97% of the coastal aquifer water is unfit for human use because of seawater intrusion and leakage of sewage water into it,” Ghoneim said.

“In 2017, there will be a real catastrophe in Gaza. There will no longer be usable water in the Strip. Should no real actions be taken, the aquifer is threatened to be exhausted by 2020, and thus life in the Strip would become impossible,” he added.

Abdul Rahman al-Tamimi, the president of the Water Committee of the Economic and Social Commission for Western Asia (ESCWA), told Al-Monitor, “Nothing is left of Palestinian water rights. The Palestinians have become customers for the Israeli Mekorot water company. Instead of demanding our rights back, we are now seeking to buy larger quantities of water from the Israelis. We now depend on the Israeli Mekorot Company.”

Shaddad Attili, the coordinator of the water negotiations for the final-status talks at the Palestinian Water Authority and a former PWA minister, told Al-Monitor, “If the two-state solution is not reached and the water rights are not granted, a strategy must be developed to suit Palestine’s position as a nonmember state in the United Nations. The international community has a responsibility toward the situation in Palestine, which has become an issue of international law in which intervention is required, in light of Israel’s choice of a one-state solution.”

Ever since its occupation of the West Bank and Gaza Strip in 1967, Israel has been trying to change the reality on the ground and impose a fait accompli regarding water; this has been based on a number of military decisions. Israel was able to essentially control the water issue by referring it to the final stage of negotiations during the signing of the Oslo Accord, which, 21 years later, has not been reached.

Israel’s resolutions show how it has claimed ownership of the Palestinians’ water and controlled it. This was particularly reflected by Resolution No. 158 on Oct. 1, 1967, which stipulated “putting all wells, springs and water projects under the direct authority of the Israeli military governor.”

It was then followed by Resolution No. 291, also of 1967, which stated that “all the water sources in the Palestinian territories have become the property of the state, according to Israeli law, passed in 1959.”

Israel did not stop issuing military orders after the signing of the Oslo Accord. It issued a decision on June 7, 1997, stating that “all the water in the land that was occupied again is the property of the State of Israel.”

The Palestinian position on these decisions usually differs between condemnation and denunciation, especially since the aforementioned decision took place during the transitional phase of the Oslo Accord. On the one hand, there was the negotiation process between Israel and the PA; however, other Palestinians were opposed to the overall negotiation process between the PA and Israel.

Ghoneim said, “Judging by Israel’s practices and actions, it does not want to solve the water issue.” But he said that in the event that Israel “expresses a sincere intention to resolve this matter, sufficient water can be provided for both states.”

However, Tamimi said in a press statement that technical and political political problems in the Oslo Accord “placed the main water resources in the hands of the Israelis, and the Palestinians’ role was only limited to services.” He said this delays a “solution to the water issue in Palestine to the final negotiations” and indicated that the solution needed to be one involving radical change.

PCBS noted in its report that Israel's and Palestine’s shares of the mountainous watersheds in the West Bank are not equal, and said the average water consumption by settlers in the West Bank is about seven times higher than the Palestinians’.

According to the report, Israel has denied Palestinians their right to exploit the water of the Jordan River since 1967, which was estimated at 250 million cubic meters. The report also says Israel is attempting to impede the establishment of wastewater treatment plants to prevent the utilization of treated water in different domains.

A study issued by the social and economic policies observatory, Al-Marsad, in December 2014 stated that “Israel and Israeli companies steal land, water and resources from the Dead Sea, the Mediterranean Sea and the Jordan River.”

The study said that “the Palestinian water is stolen by the Israeli Mekorot Company that implements Israeli water policies” and then is sold to Palestinians in the West Bank and Gaza Strip, at higher prices than the water sold to the settlers.

Amid this reality, the PWA is considering the implementation of a number of projects to mitigate the water crisis; some of the projects are based on a partnership with Israel.

Ghoneim said the PWA seeks to carry out projects designed to provide additional quantities of water, such as the rehabilitation of water networks to reduce water loss, the treatment of sewage water and using it for agriculture, the desalination of seawater in Gaza and a greater utilization of rainwater.

Regarding the PWA’s position toward the Bahrain canal, over which there have been environmental and political Palestinian objections, as previously discussed by Al-Monitor, Ghoneim said, “We need to have an agreement with Israel. It would give us access to 30 million cubic meters of desalinated water at preferential prices, which would be a great solution to the water crisis in Palestine.”

In light of the freeze in the final-status negotiations between the Palestinian Authority and Israel and the absence of a final agreement on the water issue, this dossier will remain on hold and dependent upon the status quo policy imposed by Israel, which is to the settlements’ benefit.