An Israeli water company has started working on extending a water pipeline from Israel to Gaza with Qatari funding. 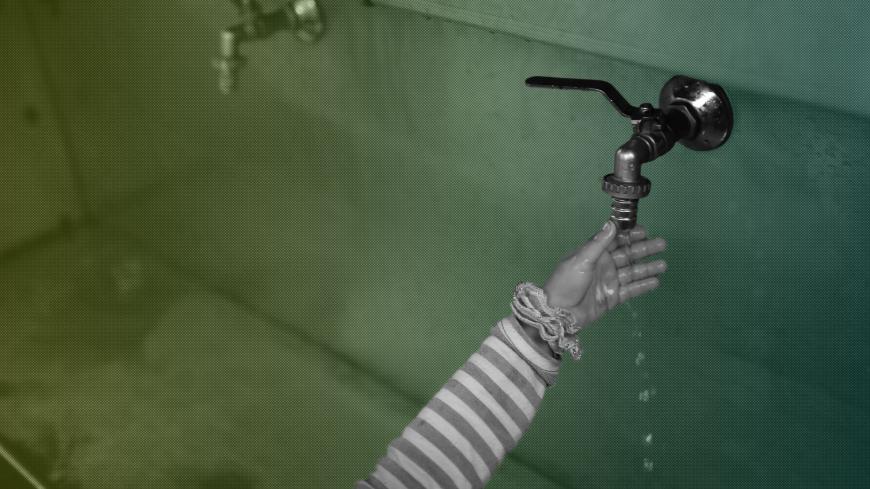 A Palestinian girl uses a public tap to wash her hand in Jabaliya refugee camp in the northern Gaza Strip, Jan. 24, 2017. - REUTERS/Mohammed Salem

GAZA CITY, Gaza Strip — The water situation in the Gaza Strip is set to improve after the Israeli Water Company Mekorot started construction June 17 to extend a water pipeline from Israel to Gaza with Qatari funding.

The Israeli newspaper Yedioth Ahronoth revealed that work on the new water pipeline is underway under strict security supervision amid concerns that Israeli workers or equipment might be targeted.

The newspaper reported that after the work is finished, the pipeline will be connected to the water network in Gaza.

Construction is expected to end within a few months, according to Toufic Hamad, director of the Economy Department at the Water Authority in Ramallah.

He told Al-Monitor that the pipeline is part of the 2005 Two Seas Canal project agreement signed between Jordan, Israel and the Palestinian authority (PA) to build a canal connecting the Red Sea to the Dead Sea. The first phase of the project began in February 2015.

The pipeline aims to increase pure water supplies to Jordan and the Palestinian territories, boosting Israel’s water sales to the PA by 20 million to 30 million cubic meters per year. Hamad said the new water line will transfer water from the Israeli side to the Gaza Strip via a line extending to the southern part of the Gaza Strip and from there to the central region.

The deputy head of the Palestinian Water Authority, Mazen al-Banna, denied any relationship between the new Israeli water pipeline and the truce understandings between Hamas and Israel in the Gaza Strip. However, he said, “It might be part of their desire to improve the humanitarian situation in the Gaza Strip.”

He told Al-Monitor that extending a new Israeli water pipeline is part of an agreement between the PA and the Israel Water Authority for Palestinians to benefit from an annual water supply.

This means the PA did not object to Israel supplying water to Gaza. Hamad said, “The project is among the duties of the PA, which never slackens. The PA tries to supply all Palestinian territories with water and offer the needed support.”

Banna said the new pipeline is set to supply the Gaza Strip with 20 million cubic meters per year. He said the new water cost of $0.84 per cubic meter ($3.18 per kilogallon) will be deducted from the PA’s funds and collected under what is known as the tax revenue funds.

Hamad said the PA will pay for the water despite the financial woes it is grappling with. Hamas, he added, has nothing to do with the project.

Tax revenue funds are indirect taxes that Israel deducts from incoming merchandise to Palestine and transfers to the PA, and they amount to $2.5 billion per year.

A study published by the Palestinian Water Authority in October of last year indicated that 99% of water sources in Gaza do not comply with international standards and are not potable.

The Negotiations Affairs Department at the Palestinian Liberation Organization says around 60% of the diseases in the Gaza Strip are caused by water pollution.

Monzer Shiblak, general director of the Coastal Municipalities Water Utility, which provides water and sewage services in Gaza, indicated that Israel agreed to extend a new water pipeline to Gaza at this specific time because Palestinians wanted to double the amount of water available to them.

Shiblak told Al-Monitor that Palestinians were also encouraged by international donors who supported them and were ready to fund them.

Palestinians in the Gaza Strip usually buy potable water from trucks that transport water from 110 desalination stations and sell each 200 liters for 10 Israeli shekels ($2.80).

The Palestinian Water Authority is to build a central water desalination station in the Gaza Strip, with an expected production capacity of 55 million cubic meters (45,000 acre feet) per year. The Water Authority received financial donations worth $565 million, which is 80% of the total funds needed for such a station.

The United Nations warned in September of last year that “the situation in the Gaza Strip has become increasingly unlivable.” Extending a new water pipeline from Israel to the Gaza Strip might deter a dire humanitarian crisis.