The Bahrain canal project to link the Dead Sea to the Red Sea seems to be of great benefit to Israel, while Palestinians will mostly be affected negatively, politically and environmentally. 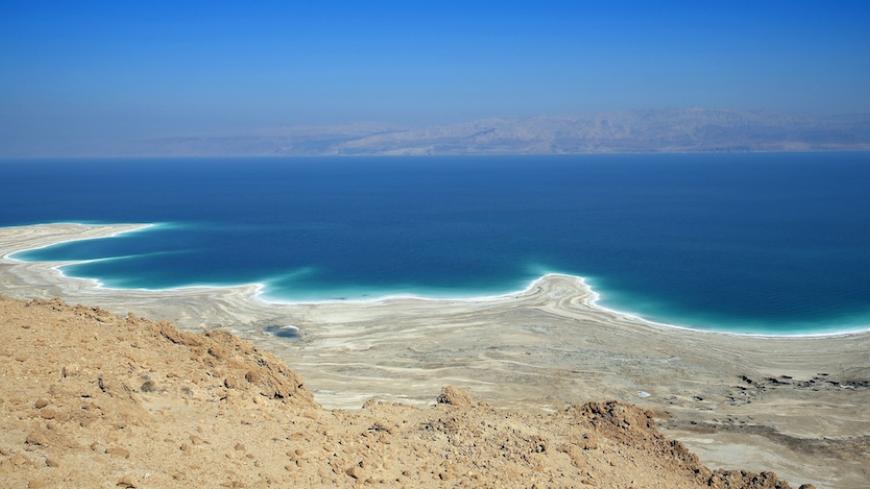 A picture taken on Feb. 8, 2014 near Ein Gedi, in Israel, shows the Dead Sea shoreline shaped by the decline in water levels. In the background is the Jordanian coast. - THOMAS COEX/AFP/Getty Images

RAMALLAH, West Bank — On Dec. 9, 2013, Israel, Jordan and the Palestinian Authority (PA) signed a memorandum of understanding in Washington to begin work on the Bahrain canal under the sponsorship of the World Bank, to connect the Red Sea and the Dead Sea. The canal aims at preventing the decrease in water levels suffered by the latter.

The first phase of the project was started by Jordan and Israel signing — in the absence of the PA, on Feb. 26, 2015 — an agreement to begin implementing the project through the establishment of a water desalination plant on the Red Sea, north of Jordan’s Aqaba, and transport saltwater by-products via a 200-kilometer (124-mile) canal to the Dead Sea.

A Palestinian absence from the signing ceremony led to a slew of questions regarding the stance of the Palestinian side — which remained silent on the matter. Numerous officials refused to comment to Al-Monitor, although criticism by water, environmental and political experts abounds with regard to the project.

Experts told Al-Monitor that the PA is not a main part of the project, and that it only attended the meeting in 2013 in response to pressure by the United States and Jordan. The PA’s presence had political motives and was aimed at financing the project.

In this regard, the Social and Economic Policies Monitor (Al-Marsad) issued Sept. 17, 2014, a report based on a number of opinions by political and environmental experts, concluded that “the Bahrain canal project primarily serves Israeli interests.”

The report went on to add that the project had other aims, such as "providing desalinated water, developing settlements, providing cooling water for the Dimona [nuclear] reactor and attracting donor funds. Toward that end, “pressure was exercised on the Palestinians to sign onto the project, for the purpose of facilitating funding by international donors.”

The former head of the Palestinian Water Authority, engineer Fadel Kaoush, wrote in an article published March 4 that the aim of Palestinian participation in the drafting of the project’s economic feasibility study was to “uncover and prove the nature and extent of Israeli practices and violations on the Jordan River basin and the Dead Sea, leading to a complete water flow blockage on the lower part of the basin, which resulted in the gradual retreat and desertification of the Dead Sea.”

But a former government official, who refused to reveal his identity, told Al-Monitor, “Palestinian participation was in response to US pressure and Jordanian desire for the PA’s participation in the project, with Jordan being the party that applied for World Bank funding in 2003 to finance the project due to its urgent need for water."

The official added, “The project serves a slew of Israeli political, economic and security interests, such as producing millions of dollars’ worth of electricity, cooling the nuclear reactors and creating a water barrier between Palestine and Jordan. This requires the deployment of military observation and protection posts along the border.”

For his part, Hassan Khreisheh, the deputy head of the Palestinian Legislative Council, told Al-Monitor that the Palestinian side was excluded from the project after “it was used as a bargaining chip by the Jordanians and Israelis to promote and stimulate the project.”

He said, “Palestinians do not benefit from the project, and the Israelis are the main beneficiaries thereof. Our only purpose was to bear false witness.”

Concerning the motives that led to the PA signing the agreement in 2013, Khreisheh said, “This is proof of the lack of vision and planning, as well as the fact that decisions are taken unilaterally,” as Palestinians were used to give legitimacy to this project, and "consider it a bridge connecting the Arab and Muslim world with Israel.” This was done through this joint project with an Arab country, with the goal of “normalizing relations.”

In an interview with Al-Monitor, the head of the Ramallah-based Palestinian Water Training Institute, Saleh Rabi, questioned the project’s goal to revive the Dead Sea and said, “The Bahrain canal project is a joint political normalization project, through which Israel aims to bolster its relations with Arab countries.”

Rabi said, “Israel killed the Dead Sea, which studies indicate will completely dry up within 50 years,” as a result of it diverting to the Negev Desert a large part of Jordan River waters that normally flow into the [Dead] Sea. This led to a decrease in the volume of Jordan River water flowing into it from 1,200 million cubic meters per year to 300 million cubic meters, refuting Israeli claims and desires to revive it.

Rabi also indicated that Israel, in an attempt to woo Palestinians in favor of the project, proposed giving them 30 million cubic meters of desalinated water for the purpose of “tightening its control on Palestinian water sources and blackmail them as a result” — with said desalinated water being a substitute for clean groundwater that Israel seeks to plunder.

The project’s repercussions are not limited to politics and the economy; it will also have devastating environmental effects for the region.

George Karzam, an environmental expert at Afaq Environmental Magazine in Palestine, told Al-Monitor that the Bahrain canal project would lead to a series of devastating hydrological effects and repercussions upon the water composition of the Dead Sea as a result of the difference in the salt and mineral content of the Red Sea as opposed to Dead Sea water.

Karzam added that the project’s main environmental effects would become evident with Dead Sea waters changing color due to the red algae that the Red Sea is known for, which will be carried over with the water to the Dead Sea, leading to detrimental effects. In addition, the transfer of water will exacerbate the fragility of the ground surrounding the Dead Sea, which was formed as a result of its waters receding and its area shrinking.

Karzam also indicated that the project will have geological repercussions. The transfer of Red Sea water to the Dead Sea will induce seismic activity due to the difference in elevation between the two regions. The powerful flow of water from the Red Sea to the bottom of the Dead Sea, considered the lowest point on earth, will lead to extreme pressures and stimulate underground seismic activity.

As the first phase of implementing the Bahrain canal project gets underway, the Palestinians seem to be the biggest losers on the political level, with Israel inaugurating its first joint megaproject with an Arab country. Losses will also be registered as a result of the topographical change that this water barrier will have on the eastern border between Palestine and Jordan, at a time when Israel, on the contrary, will reap great rewards and realize a long sought-after dream.