An agreement between Israel and the Palestinian Authority on the Red Sea-Dead Sea canal project could build some trust between the sides, but the Palestinians are leery of any impact from it going into negotiations. 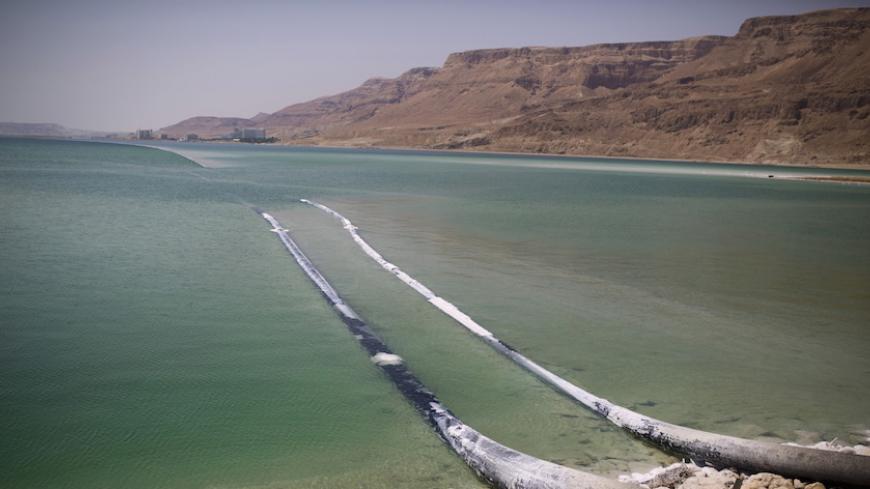 Pipes that pump water cross through evaporation pools, which today make up the southern part of the Dead Sea, Israel, July 27, 2015. - REUTERS/Amir Cohen

President Donald Trump's envoy to the Middle East, Jason Greenblatt, said at a July 13 joint press conference for Israeli and Palestinian representatives that "Water is a precious commodity in the Middle East. The US welcomes the agreement reached by the Palestinian Authority [PA] and the government of Israel, which will allow for the sale of 32 million cubic meters of water from Israel to the [PA]." The deal, which will allow Palestinians to purchase water at reduced rates, was made in the context of the Red Sea-Dead Sea canal project led by Israel and Jordan.

Also participating in the press conference, which took place in Jerusalem's King David Hotel, were Israeli Regional Cooperation Minister Tzahi Hanegbi and the head of the Palestinian Water Authority, Mazen Ghonaim. "This is the biggest, most ambitious project ever in our region," said Hanegbi.

It is hard to remember the last time that official representatives of Israel and the Palestinians sat together in such a festive setting to celebrate the turning of a new page in their relationship. "I hope that this is an indication of what is to come," said Greenblatt. Perhaps he was referring to the renewal of negotiations to reach a permanent resolution to the Israeli-Palestinian conflict.

As far as the Palestinians were concerned, it was important to emphasize that this water agreement will not impact any other future political negotiations. They do not want to let Israel claim in any future talks that the issue of water has already been resolved and there is no reason to discuss it further. "This is a regional agreement which has nothing to do with the core issues of any final agreement or the rights of Palestinians to water," said Ghonaim. He went on to say that the 32 million cubic meters of water that the Palestinians will be able to purchase at a reduced rate will be divided between the West Bank (22 million cubic meters) and Gaza (10 million cubic meters). "This will ease the suffering of our people in Gaza in particular," he explained, "since 97% of the water there is unusable."

Israel claims that for the past three years, the Palestinians have refused to be integrated into the Red Sea-Dead Sea canal project, fearing that any understanding on the issue of water will be detrimental to reaching a comprehensive diplomatic agreement. A Palestinian source who spoke with Al-Monitor on condition of anonymity rejected this assertion, stating that Israel's preconditions for the inclusion of the Palestinians in the project made no sense. "All Israel said was that the Palestinians were welcome to participate," he claimed, "but for the past three years, it refused to get into any serious discussion about [their] role in this ambitious project, because of the tense relationship with [Palestinian President Mahmoud] Abbas."

During the Barack Obama administration, US Secretary of State John Kerry worked hard to include the Palestinians in the project, mainly because the donor nations helping to finance it made funding conditional on Palestinian participation. The underlying principle was and remains that their participation will resolve the water crisis in Gaza and the West Bank and at the same time provide Palestinians with hundreds of jobs, immediately easing the unemployment crisis. Greenblatt has done in his short tenure what Kerry couldn't do in all his years in office.

"It is obvious that [Prime Minister Benjamin] Netanyahu is afraid of Trump," said a senior Palestinian official involved in contacts between the PA and the US administration. The official, speaking to Al-Monitor on condition of anonymity, went on, "Israel realized that this is not a game and compromised. It was worried that Palestinian participation in the Red Sea-Dead Sea canal project would be considered a case of establishing facts on the ground with long-term diplomatic implications on the PA's role in the Arava region, while the Americans viewed Palestinian participation as being of humanitarian rather than diplomatic significance. It could be used to reach additional agreements and even a breakthrough, as happened during Greenblatt's current visit."

The Palestinians credit Israeli Finance Minister Moshe Kahlon for an important role in pushing forward with the Red Sea-Dead Sea canal. His understated activities, say the Palestinians, helped to establish trust between him and Palestinian Prime Minister Rami Hamdallah. Kahlon was also mentioned in the context of the agreement signed July 10 between the Israel Electric Company and the Palestinian Authority to operate a secondary power station in the Jenin region. It will increase the supply of electricity to the West Bank and allow the regular flow of electricity to Palestinian residents of the region after many years of uncertainty. At the signing, Israel was represented by Energy Minister Yuval Steinitz, but Abbas' office highlighted Kahlon's contribution to the deal and continues to speak warmly of him.

The Red Sea-Dead Sea canal project is the largest of all the initiatives intended to bring economic stability to the Palestinian Authority. This grand scheme has been a topic of extensive discussion for the last three decades, but only now is it actually taking shape, with work scheduled to begin soon. The initiative promises to not only resolve the regional water crisis but also, among other things, save the Dead Sea from disappearing by allowing water from the Red Sea to flow into it, creating hydroelectric energy as it drops from sea level at the Red Sea to the Dead Sea, the surface of which stands at the lowest land elevation on Earth.

"The Red Sea-Dead Sea canal project is very important to the Palestinian economy, but it is also important to creating a positive new atmosphere which can lead to contacts aimed at reaching a comprehensive diplomatic arrangement," said a senior Palestinian source on condition of anonymity. He added that Greenblatt realizes that ensuring an economic lifeline to the PA through huge projects like the canal project will create an atmosphere of trust between the parties unlike anything seen in the past few years. Other projects and initiatives include foreign aid from the Trump administration that is soon to reach the PA, he claimed. Reducing unemployment and stimulating the economy will prompt the Palestinian public to support a renewal of negotiations with Israel, on the realization that future peace will bear economic benefits and should be given a chance.

Improving the Palestinian economy is also a top priority for the Israeli defense establishment, which sees immense implications for security. For months now, the Coordinator of Government Activities in the Territories has been pressuring the political leadership to take steps in that direction, based on the assumption that Palestinian hardships lead to desperation, and desperation leads to terror.