Tunisia can only afford neutrality in Qatar crisis

Tunisia has officially remained neutral in the Qatari-Gulf crisis given its economic relations with the two main parties involved. 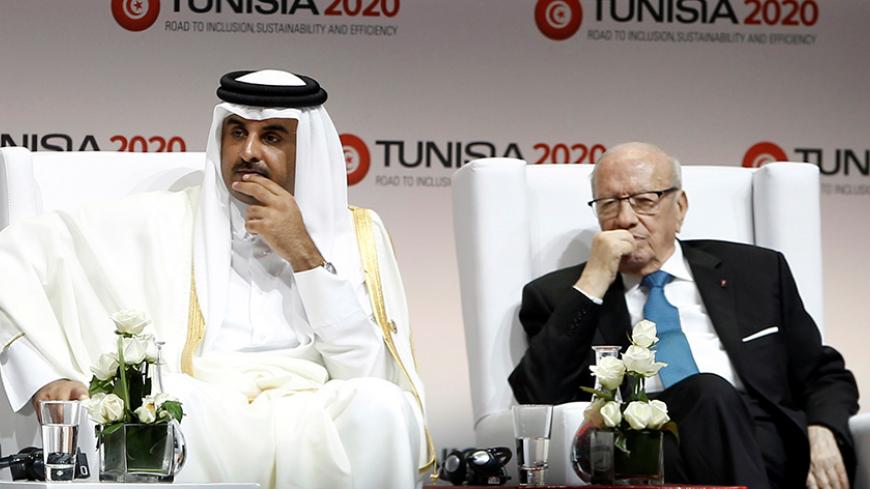 The ruling coalition of Ennahda and Nidaa Tunis has adopted a neutral stance in the Gulf crisis triggered by Saudi Arabia, the United Arab Emirates (UAE), Bahrain and Egypt severing diplomatic relations with Qatar on June 5 and imposing a land and air blockade against it.

Abdelkarim Harooni, chairman of the Shura Council of Ennahda, the majority party in parliament, described Saudi Arabia's application of pressure in the Gulf as a painful step in terms of Riyadh's attempt to exert influence and be recognized as regional leader.

Ali Laarayedh, deputy head of Ennahda and former prime minister, told Al-Monitor that Tunisia's position falls within the framework of its consistent desire to preserve Arab unity, to maintain good relations with all parties and preserve diplomatic tradition among Arab states.

Laarayedh also remarked, "The crisis that broke out in the Gulf is taking place between sister countries with great common interests, a shared future and similar security concerns. These brotherly countries have close relations and have cooperated in various fields of trade, politics and finance. Accordingly, we support every diplomatic effort to contain the crisis through dialogue."

He added, "We hope the crisis will not move from the political dimension to the military one, especially amid the recent developments and Iran and Turkey's [military] interference. Otherwise, a large-scale regional confrontation would emerge, especially amid the daily efforts to force Qatar to change its policy."

Turkey has a military base in Qatar, and two weeks into the crisis, deployed troops to take part in joint exercises. Ankara and Tehran have both expressed their support for Doha and sent food assistance to Qatar on June 11.

"In my assessment," Laarayedh said, "diplomatic interventions will prevail, especially considering that this is not the first time that differences between Arab sister countries have surged. The Gulf dispute must be solved internally because widening the dispute would only serve the interest of the region's enemies and would only disrupt national stability and security."

Nidaa Tunis issued a statement June 5 confirming that the movement is committed to supporting dialogue. The statement also said, however, that Tunisian policy is ultimately in the hands of President Beji Caid Essebsi and Foreign Minister Khamis al-Jhinawi. Al-Sabah on June 5 quoted Jhinawi as saying that Tunisia calls on those involved in the dispute to calm down, keep the conflict contained and overcome their differences and find a solution that satisfies all parties.

Several media outlets quoted Jhinawi stating, "Tunisia stands at the same distance from all parties to the conflict, and it must maintain good relations with all countries." He further remarked, "The Arab world is witnessing many problems and we do not want more crises."

Meanwhile, the opposition Popular Front, which has also called for nonalignment, nonetheless lashed out at Ennahda, accusing it of siding with Doha. It said on June 5 that despite Ennahda's nonalignment, it cannot deny that Qatar has supported terrorism, by embracing extremist groups in Syria and Libya.

Popular Front parliamentarian Ayman al-Alawi told Al-Monitor, "The Popular Front refuses to side with any political party in the Gulf crisis so as not to jeopardize the sovereignty and interests of the Tunisian people and [in order] to stay away from narrow political interests."

Alawi said that the Islamist-oriented Ennahda is trying to cover for Qatar funding terrorism, because of military and security cooperation relations established between Tunis and Doha after the 2010-11 revolution. Alawi accused Ennahda of trying to portray the Gulf dispute as illustrating the difference between Qatar, which has tended to support the Arab Spring and the Muslim Brotherhood, whereas Saudi Arabia is more concerned with trying to curry favor with the United States.

Citing close links between Ennahda and the Brotherhood — Ennahda claims to be independent from the Islamist group, a contention some dispute — Alawi called on the Tunisian government to conduct an investigation into whether Ennahda had received funds from Qatar during the 2014 election campaign, a move that would be illegal. He also called for examining the bank accounts of other Tunisian political entities with alleged ties to Qatar and accused the Qataris of having helped Ennahda politically through media coverage on Al Jazeera.

Moncef Marzouki, former Tunisian president (2011-14) and current head of Al-Irada, a movement founded after the 2014 elections, expressed his support for Doha on June 5. He asserted, "The pressures of Saudi Arabia, Egypt and the UAE come with the intention of blackmailing and subjugating our Qatari brothers."

Marzouki sharply criticized the UAE, accusing it of being behind the diplomatic assault on Qatar to punish it for its support of the Arab Spring. "Qatar is a friend of Tunisia, and our government, which theoretically represents our people, has to protest against the attempt to isolate and stifle Qatar and even try to put it under guardianship," Marzouki said in a June 5 Facebook post.

Marzouki was head of the Congress for the Republic, when the Constituent Assembly selected him president to succeed Zine Abidine Ben Ali. The Congress, since dissolved, has also been accused of having received financial support from Qatar.

Asked about the repercussions of the Gulf crisis on the Tunisian economy, economic analyst Moaz al-Joudi told Al-Monitor, that there are concerns that it will negatively affect the Arab region as a whole given Saudi pressure and US President Donald Trump's statements accusing Qatar of funding terrorist groups.

Joudi commented, "Tunisia cannot afford to risk its fragile economy in [others'] struggle for leadership, for the sake of restoring regional balances, and playing an influential role in the [Gulf] region."

Joudi said that Tunisia's decision not to back any political camp is a solid one because of its ties with Qatar, which has provided in excess of $1 billion in financial assistance in the form of loans, and the presence of Saudi investments and commercial institutions in the country.