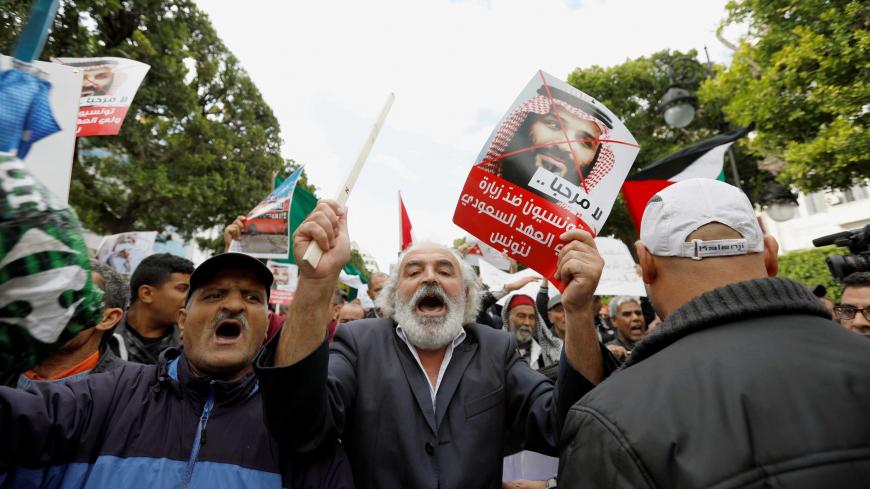 The crown prince’s trip, part of a regional tour that also brought him to Bahrain, the United Arab Emirates (UAE) and Egypt, was aimed at rehabilitating his image after a global outcry over the murder of Saudi writer Jamal Khashoggi and reasserting the kingdom’s position as a powerful actor on the world stage.

In Tunisia, the crown prince saw the opportunity to further shore up support in the Arab world and push back against the influence of regional foes Qatar and Turkey, which have closer ties with Tunisia’s moderate Islamist Ennahda party.

The stop was also deeply symbolic for Prince Mohammed, who sought to show that Tunisia, “the last surviving Arab Spring country, whose democratic transition his country tried so hard to destabilize between 2011 and 2013, is welcoming him at a time he is seen a pariah by many states,” Tunis-based political analyst Youssef Cherif told Al-Monitor.

However, not all went as planned for the 33-year-old prince, who was exposed during his visit to public expressions of discontent that are strictly forbidden in the Gulf monarchy.

For two straight days leading up to his arrival, hundreds protested on the capital’s main Habib Bourguiba Avenue, condemning the young Saudi ruler for his alleged role in Khashoggi’s murder, the deadly four-year war in Yemen and his perceived abdication of the Palestinian cause.

“Bin Salman, you butcher,” protesters chanted on the evening of Nov. 26. “Tunisia is not for sale.”

Hanging above the headquarters of the Tunisian Journalists Syndicate several kilometers away from the protests was a banner depicting the crown prince wielding a chainsaw, a reference to one of the manners in which Khashoggi is reported to have been killed and dismembered. “No to the desecration of Tunisia, land of the revolution,” the poster read.

Many activists felt that hosting the beleaguered crown prince was a step backward for a country striving to promote human rights and move forward with its democratic transition.

“The visit is an insult to Tunisia's reputation,” read an open letter signed Nov. 26 by the syndicate and numerous civil society groups. “It is an attempt by those holding the reins of power in Saudi Arabia to polish their image and contain the consequences of the murder of Jamal Khashoggi, the most heinous of a long series of Saudi Arabia’s horrific attacks on human rights and rampant repression.”

However, at the presidential wing of the Tunis-Carthage airport Nov. 27, the scene was very different. There, the crown prince was greeted by smiling officials from all the major political parties, including President Beji Caid Essebsi, and honored with a gracious welcome ceremony and the country’s most prestigious award, the Order of the Republic.

Next he was ushered to the presidential palace for an official dinner and talks that focused on increasing economic cooperation, promoting investment and countering terror and extremism in the region.

“We say, 'Welcome to your own country,’” Essebsi told local media after the visit.

For Tunisia’s 92-year-old president, whose secularist Nidaa Tunis party is in shambles ahead of crucial presidential and parliamentary elections next year, the meeting was as strategic as it was for the crown prince.

“Mohammed bin Salman’s visit comes amid the most acute political crisis since 2013,” said Cherif. “The president and his inner circle are in conflict with Ennahda's leaders, their allies between 2015 and 2017. They are currently the ones inviting MBS and it's a message to Ennahda: They can take Tunisia closer to the Saudi-Emirati-Egyptian axis and the repressive apparatus which banned Ennahda for decades can be restored.”

“In a way, this is a foreign card in Essebsi's hand against his local foes,” Cherif added.

The day after the crown prince’s visit, a Tunisian government official confirmed that Saudi Arabia had agreed to send a $500 million soft loan to the country, part of numerous agreements to be finalized that would enhance economic ties.

Though historically strong, Saudi-Tunisian relations took a hit following the 2011 Jasmine revolution, which sparked a wave of Arab protest movements that Riyadh opposed.

Tensions abated after Essebsi, a former parliament speaker under Ben Ali, took office in 2015, but Ennahda, which maintains considerable political influence, has continued to be a thorn in the side of Saudi Arabia and the UAE.

Ennahda's Ajmi Lourimi was one of the rare political figures to speak out against the crown prince’s visit, telling the Tunisian press it was “untimely” given the controversy surrounding the Khashoggi case.

“Certainly we have age-old relations with Saudi Arabia and it is the president of the republic who defines the foreign policy of the country, but the circumstances of the visit of MBS are not the best,” Lourimi said, hinting at sharp divisions within Tunisia’s government over the country’s diplomatic approach.

Apart from the internal politics at play, the crown prince’s visit — and Tunisian civil society’s bold reaction to it — underscored how far the country’s democratic transition has come seven years after the revolution, observers and activists said.

“The fact that people are able to demonstrate and mock the Saudi crown prince without being arrested/assaulted/harassed shows that Tunisia is a free country, the exact opposite of Saudi Arabia and most Arab countries,” said Cherif.

Protester Emna Mizouni added in comments to Al Jazeera, "Perhaps as a people, in the past, we could not speak our minds. But today we can. … It is shameful for Tunisia, which received the Nobel Peace Prize, to receive someone like this.”

From Tunis, the crown prince continued on to Buenos Aires, Argentina, where he is set to attend the G-20 summit with world leaders. There, more than 10,000 kilometers away, he will also be dogged by allegations of involvement in Khashoggi’s murder, a sign that despite the Saudi state’s best efforts, the case is not being laid to rest.