The Tunisian Foreign Ministry’s announcement that it would send a consul to Syria has been refuted by the president as the new government reconfigures Tunisia’s regional alliances. 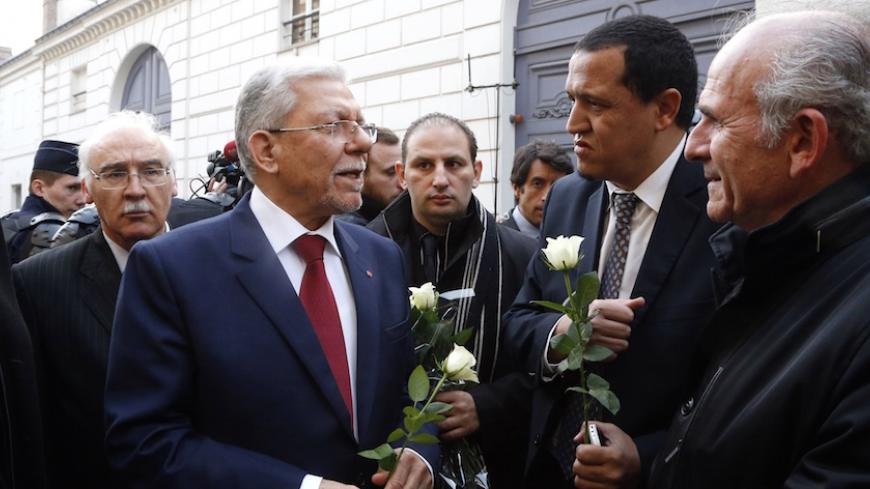 TUNIS, Tunisia — Tunisian Foreign Minister Taieb Baccouche announced April 2 that a Syrian ambassador would be welcome in Tunis, and that Tunisia would establish a consular presence in Syria. The following day, President Beji Caid Essebsi cast doubt on the move during an interview with France 24, saying that he had not approved the decision. "Foreign policy is part of the presidential prerogatives and the ministry shall implement the strategy dictated by the presidency," Essebsi said.

The contradiction led to confusion over the nature of Tunisia’s relationship with the Syrian government. The Tunisian government did not respond to Al-Monitor’s requests for clarification.

Political analyst Youssef Cherif, however, said that Tunisia would send a consul to Damascus to handle bureaucratic procedures affecting Tunisian citizens in Syria. “It is my understanding that there will be … no Syrian ambassador anytime soon,” he said when asked about Baccouche’s statement. “That was wrong and discredited by Essebsi the following day.” Instead, the Syrian government may be allowed to establish a consular presence in Tunis, he added.

This is not Baccouche's first foreign policy announcement to be later refuted. On Feb. 22, he announced that Tunisia would establish two consulates in Libya to deal with the rival governments in the east and west of the country. The move was seen as an implicit recognition of the Libya Dawn-led government in Tripoli, which the international community considers illegitimate. Baccouche’s statement was later walked-back.

Despite the mixed information, Tunisia’s new government is significantly shifting the country’s foreign policy from that pursued by the first post-revolution government, known as the troika.

On the ideological level, the troika, which consisted of the moderate-Islamist Ennahda movement, the leftist Congress of the Republic (CPR) and the leftist Ettakatol party, placed the promotion of democracy and human rights in the Arab world at the center of its foreign policy. Now, the Nidaa Tunis-led government is styling its approach as more pragmatic and neutral.

The shift in guiding principles has also been accompanied by a change in regional allies, with the troika being closer to Turkey and Qatar and the new government having better relations with Saudi Arabia and the United Arab Emirates (UAE).

In the wake of the Arab Spring, both countries sought to align themselves with the new order emerging in the Arab world. Due to ideological affinities between Ennahda and the ruling party in Turkey and a need for financial assistance, the troika government was happy to oblige, according to Cherif.

In the past, Tunisia had been a member of the Non-Aligned Movement and mostly followed the lead of close European allies such as France when it came to foreign policy. Moncef Marzouki, the first post-revolution president, sought to chart a new course in the country’s foreign affairs. “He wanted to build a new relationship with Africa,” Mbarek said, and also looked to develop relationships with countries in Central and South America and East Asia.

The troika also sought to represent the principles of the revolution in its relations with other countries in the Arab world. “Their unique, defining quality was that they could stand up for their principles, democracy, human rights and civil liberties in international affairs,” Alexander Nisetich, a researcher focusing on Tunisian foreign policy, told Al-Monitor. “That perspective was not warmly received by many of Tunisia’s neighbors.”

As an expression of this policy, Tunisia cut ties with the Syrian government in Damascus in February 2012.

The prominent role of Islamists in the troika government and the arrival of democracy in Tunisia also made the country’s western neighbor Algeria uncomfortable, according to Cherif. He said the Algerian press accused Marzouki of criticizing Algerian domestic policy on several occasions and showing preference for Morocco, straining relations between the longtime allies.

In an address to the United Nations in September 2013, Marzouki called on Egypt to release former President Mohammed Morsi from prison after he was removed from office by the military in July of that year. Marzouki also referred to Egypt as an example of the difficulties involved in democratic transitions. The address prompted Egypt to recall its ambassador from Tunis for consultations.

In Libya, Tunisia plotted a more neutral course. The post-revolution transition government did not withdraw its recognition of Moammar Gadhafi until the Libyan rebels had toppled his government from power. From the beginning of the uprising, however, Tunisia communicated with both sides and delegations from various parties were welcome in Tunis for negotiations, according to Cherif.

Since Libya divided in two last summer following a battle between the Islamist-leaning Libya Dawn coalition and the pro-elected government Zintan militia for control of the Tripoli airport, Tunisia has maintained official relations with the internationally recognized government in the east. However, it has also kept lines of communication open with the Libya Dawn government in Tripoli, Cherif added.

Tunisia’s closeness with Turkey and Qatar under the troika also created strained relations with Saudi Arabia and the UAE as the various blocs jockeyed for regional influence following the Arab Spring.

Tunisia’s new government, led by the secular-modernist party Nidaa Tunis, set out to have a less contentious, more pragmatic regional foreign policy, according to Nisetich, who said, “They weren’t going to try to take a position that would be controversial or ideological.”

“The president … has always had a vision of foreign policy based on consensus,” Issam Matoussi, a parliamentarian from Nidaa Tunis, told Al-Monitor.

Since receiving a vote of confidence on Feb. 5, the Nidaa Tunis-led government has drawn close to traditional ally Algeria again and also smoothed over and developed deeper relations with Egypt, according to Cherif. Tunisia has also aligned itself more closely with Saudi Arabia and the UAE and decreased ties with Turkey and Qatar, he added.

It is still unclear whether the new government is pursuing a pragmatic foreign policy as it claims or trying to distance itself from the troika, Cherif continued. “In the beginning I thought of it as just pragmatism,” he said. “It’s unclear to me if we are still in pragmatism, or if we are trying to cut ties with Turkey and Qatar.”