Nidaa Tunis and Ennahda share a similar economic vision for stabilizing the Tunisian economy, raising the question of whether there will be a true political opposition to challenge government policies. 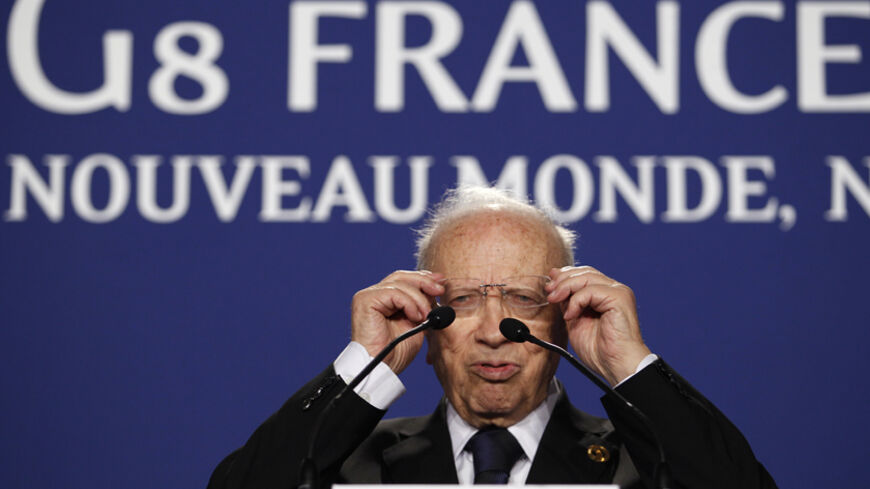 Tunisia's Prime Minister Beji Caid Essebsi adjusts his glasses during a news conference at the G-8 summit in Deauville, May 27, 2011. - REUTERS/Andrew Winning

TUNIS, Tunisia — Nearly four years before his name appeared on the ballot in Tunisia’s run-off presidential elections Dec. 21, Beji Caid Essebsi had represented the country as interim prime minister at the 2011 gathering of the G-8 in Deauville, France. At the meeting, Essebsi signed on to the Deauville Partnership, a multibillion dollar initiative by Western powers and international financial institutions to support countries in transition following the Arab Spring.

The partnership aimed to help stabilize regional economies, better integrate them into the global market, create jobs and promote transparent governance by making financing available and pushing for reforms. The principles established by the partnership have guided Tunisian economic policy since 2011 and are largely supported by the country's two main political parties — the secular, modernist Nidaa Tunis, headed by Essebsi, and the moderate Islamist Ennahda.

Following legislative elections in October, Nidaa Tunis emerged as the largest party in parliament, with 86 out of 217 seats, and was tasked with putting together a coalition to form the next government. Ennahda came in second place, with 69 seats. Nidaa Tunis and Ennahda are intensely polarized — except, apparently, when it comes to the economy. In respect to the economy, Youssef Cherif, a political consultant, told Al-Monitor, “At the end of the day, they do agree on many points.”

Other political parties and civil society groups, however, are less convinced that the reforms promoted by international financial institutions are the best way forward. “Unfortunately, regarding the World Bank and the IMF [International Monetary Fund] in Tunisia, we have had a bitter experience,” Mongi Rahoui, a member of parliament from the leftist Popular Front, told Al-Monitor.

Prior to the 2011 revolution, international financial institutions had praised President Zine El Abidine Ben Ali for his liberalization of the economy. The World Economic Forum, according to a 2014 World Bank report, regularly ranked the Tunisian economy as the most competitive in Africa.

The toppling of Ben Ali's regime, however, laid bare the deeply corrupt system built on patronage that he had relied on to rule the country. The system fed regional inequalities, unemployment and marginalization. “The revolution was also triggered because of that,” said Mabrouka Mbarek, a former member of parliament from the center-left Congress of the Republic (CPR), which has four seats in the new parliament.

Since the revolution, Tunisia has signed agreements with the World Bank for a $1.2 billion loan and with the IMF for a $1.78 billion loan. The money is being used to fund the country’s annual budget.

Taking on more loans when Tunisia is already struggling to pay off debts accumulated under Ben Ali does not make sense to Messaoud Romdhani, a founding member of the Tunisian Forum for Economic and Social Rights. “Neither the World Bank nor the IMF will be the solution to our problems,” he said.

Rahoui contends that the Popular Front, which has 15 seats in parliament, has an alternative, viable plan. Instead of relying on international financial institutions, he thinks the government should focus on expanding the tax base and integrating the informal economy into the formal sector to raise revenues. He also believes Tunisia should suspend debt payments until the economic situation stabilizes, so the government will have enough funds to invest to stimulate growth.

The Popular Front and CPR both advocate auditing the debt from the old regime. They believe that the Tunisian people should not have to pay the bill for Ben Ali’s corruption. A number of smaller parties and independent members of parliament share similar positions, according to Cherif.

Nidaa Tunis has taken the position that there is no need to review the role of the World Bank and IMF in the Tunisian economy or to suspend or audit the debt. Mehdi Zaoui, a member of Nidaa Tunis’ Executive Bureau, told Al-Monitor that Ben Ali did not steal money borrowed from international institutions.

“The old regime, despite being a corrupt regime, was also an intelligent regime,” said Zaoui, adding that it found indirect ways of accumulating money, such as through tax loopholes, concessions and monopolization of businesses. As for working with the World Bank and IMF, “That practice has been in place since ages ago,” he said. “It will not be changed.”

In Tunisia’s constitution, the major source of power provided to the opposition is the presidency of the financial affairs committee, which will likely go to Ennahda, since it is the second largest party and unlikely to be part of any governing coalition. Having the presidency of the financial affairs committee controlled by a party with economic policies similar to the government is problematic for Mbarek. “The opposition, it must be economically different,” she said. “Otherwise, we are headed toward a culture of fake opposition.”

The Popular Front’s Rahoui is less concerned. “Even if we don’t have the presidency of the committee, we will still fight for our economic project,” he said, through civil society mobilization and the media. In reality, however, there isn’t much that political parties can do to challenge the role of the World Bank and IMF in the economy, Rahoui conceded. “We really are in need of such help,” he said. “So, [parties] have to follow the same program.”

Nidaa Tunis and other parties are savvy to the dangers of further burdening an already financially weary population. “They are very much aware that the population in general is not for deep and serious neoliberal reform,” Cherif said. “Instead of doing the reforms in 5 or 10 years, they will do them in 10 or 20.”

Zaoui clearly draws the line at World Bank and IMF austerity measures aimed at trimming Tunisia’s public subsidies. Such cutbacks have sparked protests in the past. “There are limits,” Zaoui said, referring to taking on too much debt and implementing troubling reforms.

Cherif argued that aside for an increased emphasis on transparency, there is little new in Nidaa Tunis’ policy of maintaining subsidies while pursuing liberal market reforms. “They are simply adopting the regime that was in place before the Arab Spring,” he said, although Zaoui insists that Nidaa Tunis’ economic plan is new.

For Romdhani, there has to be an alternative. “Democracy without economic and social changes is not going to lead to something better,” he said. Parties and civil society groups seeking an alternative economic policy appear, however, to have little room to maneuver in a debt-strapped Tunisia with near economic consensus between its major political players.