Qatar steps up its involvement in Tunisia with investment conference

The Arab Spring’s nascent democracy is the latest theater where Gulf state rivalries are playing out. 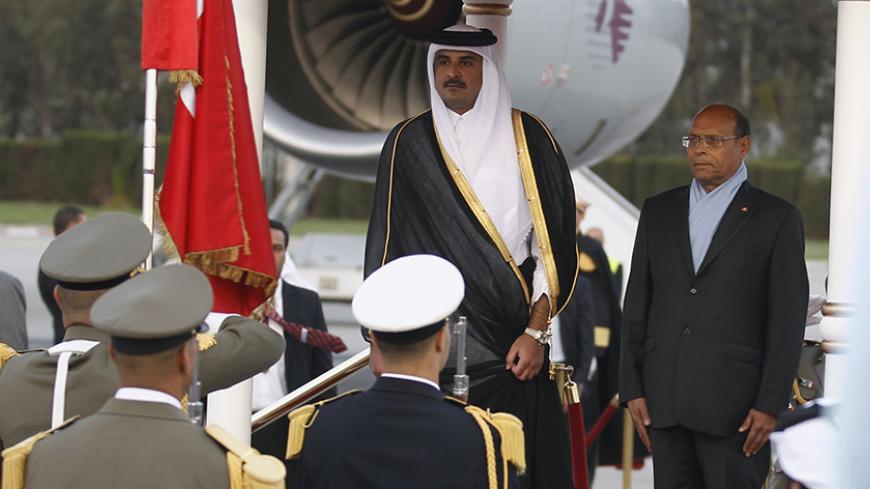 Behind the scenes, the forum’s outcome will also help determine whether cash-flush Qatar bet on the right horse in its bid to expand its influence in post-Arab Spring North Africa. The emirate is a “partner” and “godfather” of the conference, co-organizer Mourad Fradi told radio station Express FM Nov. 22.

Sheikh Tamim bin Hamad Al Thani is the only foreign head of state expected to participate, and Qatari media credit him with coming up with the plan to inject sorely needed investment into Tunisia’s stagnant economy during President Beji Caid Essebsi’s visit to Qatar in May. The Tunisia 2020 conference on Nov. 29-30 seeks to pair up investors with 82 projects across 20 economic sectors that would have a combined value of $18.9 billion.

That Qatar is a sponsor of the conference should come as no surprise, as Gulf states have long been embroiled in the small North African country. Kuwait has been financially involved in Tunisia since the 1960s, while the United Arab Emirates (UAE) and Qatar have been investing in the country since the 1990s. Interest — and Gulf state rivalry — peaked after the 2010-11 Jasmine Revolution that led to the ouster of longtime Tunisian dictator Zine El Abidine Ben Ali in 2011.

Under Ben Ali, Tunisia’s economy was state-controlled and largely closed to both domestic and international investors. Investments focused on energy and transport-related infrastructure projects.

Even then, however, “it was through a Qatari grant that the school of medicine of the University of Tunis was built,” political analyst Youssef Cherif told Al-Monitor. “There were Qatari investments in tourism and in [the coastal town of] Skhira’s oil refinery,” but “corruption and political disagreements halted or slowed their flow.”

The financial vacuum post-revolution has ushered in a new period for investment as Tunisia finds itself increasingly entangled with Gulf states, particularly Qatar. Qatar’s foray into Tunisian finance followed the establishment of the Troika government and the increased power of Ennahda’s Islamists after the 2011 constituent assembly election, said former Minister of Finance and Investment Yassine Brahim.

According to a 2015 study by the German Council on Foreign Relations, Qatar viewed Tunisia’s 2011 revolution positively. The Qataris “wished for the West to perceive Qatar as an interlocutor and a bridge — in this case to Ennahda — as part of a larger network of Islamist movements that were expected to be the future powers in the Middle East.”

“Tunisian politics were — at least between 2011 and 2014 — in line with Qatar's vision for the region, leading some observers to describe Tunisia as part of the Turkish-Qatari axis,” Cherif said. As such, “grants and loans accelerated after 2012, and Qatar became the biggest Arab investor in Tunisia, as Libya collapsed and the UAE discouraged its investors [from coming],” Cherif added.

The UAE is said to have been particularly miffed with Essebsi’s decision to compromise with Ennahda in the name of national unity following his ascension to the presidency in December 2014. Last year, the Middle East Eye news site reported that Algerian officials had warned their Tunisian counterparts that the UAE was seeking to undermine Tunisia’s democratic transition in favor of an anti-Islamist autocracy similar to Egypt’s.

According to statistics dating from September 2016 from Tunisia’s Foreign Investment Promotion Agency, Qatar’s investments in Tunisia are over $1 billion, with the bulk of investments going to the telecommunications and service sectors. While financial discussions with the UAE have gone cold "in the last few months,” according to Brahim, Qatari investments have continued, as evidenced by the country’s support for Tunisia’s investment conference. Two major investment projects are expected to be announced at the conference: a $500 million deposit to the Tunisian Central Bank that will go through 2018, and a $500 million line of credit in March 2017.

Qatar has also been increasingly focusing on tourism, with the investment promotion agency reporting $21.8 million worth of investments. Qatari Diar, the sovereign wealth fund, purchased a luxury hotel in Tabarka, a coastal city near the Algerian border, which includes a soccer complex for training. Qatar is also spending tens of millions of dollars investing in a tourism construction project in the south, near Duze, and in Gammarth, a wealthy suburb of Tunis.

The Qataris have also made small donations to the Ministry of Interior and in security projects. “They’re not really into the idea of donations,” Brahim said, “more so investments.”

“Those investments,” Cherif said, “did not have great financial returns for the Qataris, unlike what they spent in France or the United Kingdom for instance. However, it offered them popularity among many Tunisians and secured strong allies. Qatar is now a major player in Tunisian politics, courted by every government since 2011 — even those most opposed to its policies.”

While Qatar has good relations across the political spectrum, from Ennahda to Nidaa Tunis, there is concern that too much influence could lead to a “Gulf buyout” of the country. For the moment, though, Tunisia can’t be too picky: Infrastructure projects, foreign investments and jobs are too sorely needed.