What does Gulf crisis have to do with Tunisian women?

Banning Tunisian women from flying on Emirates airline may have more to do with UAE geopolitics than possible terror threats. 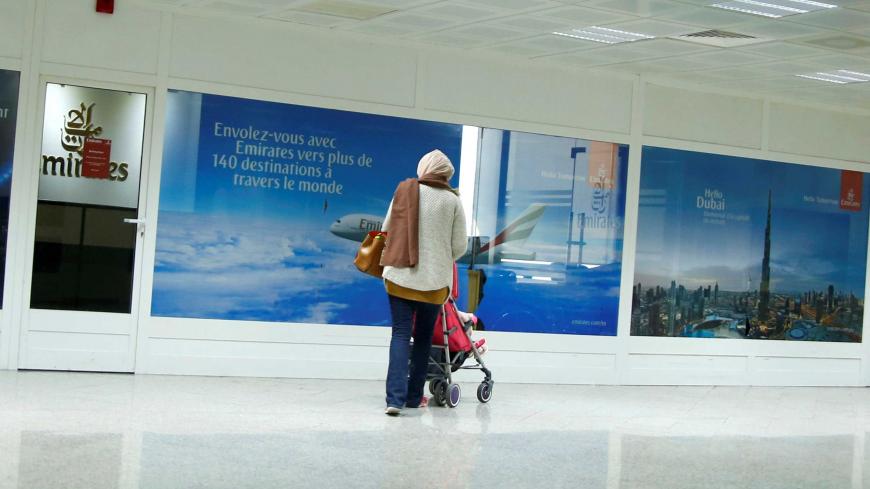 When the United Arab Emirates (UAE) refused to allow Tunisian women under the age of 30 — or women carrying Tunisian passports — to board Emirates airline flights on Dec. 22, chaos broke out in airports around the world, as women were stranded everywhere from Dubai to Hong Kong and men refused to leave their female traveling companions behind.

Because of pre-existing tensions between the two countries, the UAE bypassed typical protocol and did not inform Tunisian authorities ahead of time. Reactions from the Tunisian public were swift and furious, with the #NoWomenNoFly and #TunisiaDisciplinestheUAE hashtags trending on Twitter, as well as calls to boycott Emirates airline.

On Dec. 24, the Tunisian Ministry of Transport, which is under the direction of Prime Minister Youssef Chahed, banned Emirates from landing in the country. The ministry’s declaration was viewed as the official government position, and President Beji Caid Essebsi was criticized for his initial silence.

On Monday, Essebsi and Foreign Minister Khemaies Jhinaoui mildly condemned the UAE’s travel ban against women to create a united front between the president and the prime minister. Essebsi confirmed that Tunisia will not allow Emirates flights to land in the country. In an angry response, the UAE announced that all flights between Tunisia and the UAE were suspended indefinitely.

The UAE still has not given a detailed reason for the travel ban, although it did cite security concerns. “The UAE voiced fear that an attack will probably be committed by Tunisian women or women with Tunisian passports,” spokeswoman for the Presidency of the Republic Saida Garrach told local Shems FM radio Dec. 25. Noting that it is a “UAE sovereign decision based on credible security information,” Garrach nevertheless expressed disappointment at the “unacceptable” treatment of Tunisian women.

Garrach noted that several countries have issued warnings about Tunisian women or Tunisian passport holders who have been returning from joining the Islamic State (IS) in Syria and Iraq. Neither she nor the UAE government confirmed if this was the reason behind the ban.

The New York-based Soufan Group recently revised its numbers of foreign fighters who have left Tunisia to join IS in Iraq and Syria, placing the count at just under 3,000 (other estimates reach 6,000). For years, Tunisia was considered the largest exporter of foreign fighters; they have recently been edged out by Russia and Saudi Arabia. According to the Tunisian Center for Research and Studies on Terrorism, 3.5% of jailed extremists are women. Tunisian media places the number of women who have left for Syria and Libya at 700. But there are significantly more Tunisian men than women who have joined IS. Their roles are also different: Generally speaking, men are more likely to carry out violent attacks. So if the UAE would ban anyone, wouldn’t it make more sense to ban men? A blanket ban on women recalls US President Donald Trump’s so-called Muslim ban, which created an international outcry. And at the height of the #MeToo social media campaign, the UAE seems to have chosen a very bad moment for gender discrimination.

In the midst of the Gulf crisis, such strange nondiplomacy can’t be brushed off. While both Tunisian and UAE government officials have said the sources regarding the security threat were “credible,” a deeper look at UAE policies toward Tunisia uncovers a more complex explanation.

As Al-Monitor reported last year, Tunisia’s nascent democracy is one of the latest theaters where Gulf rivalries are playing out. Indeed, Tunisia is the only Arab country that has been relatively successful in implementing a functioning democracy post-revolution (albeit a “flawed democracy”). Libya, Syria and Yemen have all been plunged into chaos, and Egyptian democratic elections were overturned by a violent military coup.

“The UAE sees the Arab Spring as a chaotic parenthesis that destroyed its former allies [including former Tunisian President Zine El Abidine Ben Ali], liberated public opinion and therefore can have repercussions in its own society, and also gave Islamists the right to be involved in politics. In a society like the UAE, the only opposition that can emerge to the ruling dynasty is an Islamist opposition,” Cherif said.

Meanwhile, from the start of the 2011 revolution, Qatar was a strong supporter of Tunisia. Qatar, which had been investing in Tunisia since the 1990s, increased financial investments in the country and is now the country’s largest Arab investor. Qatar was reportedly pleased with the increased power of moderate Islamist party Ennahda following Essebsi’s 2014 decision to compromise with Ennahda in the name of national unity.

Several sources note that the UAE, which was Tunisia’s second-largest Arab foreign investor prior to 2011, is upset by Qatar’s positive relations across the Tunisian political spectrum and has actively discouraged its investors from being involved with Tunisia. “Since 2011, the UAE triggers a crisis and humiliates the Tunisian government, often in order to influence political decisions taken in Tunis,” Cherif noted.

Indeed, this isn’t the first time Tunisians have had issues traveling to the UAE. In 2015, Tunisian businessmen had their visa applications denied for unclear reasons, while Tunisians already in the UAE had difficulties renewing their work permits. At the time, the UAE said this was in response to the increased number of Tunisians fighting with Islamist groups, though none of the refused visas belonged to people with links to terrorist organizations.

The UAE, meanwhile, along with Saudi Arabia, Egypt and Bahrain, broke off all diplomatic relations with Qatar in early June. The decision was reportedly enacted because of Qatar’s “embrace of various terrorist and sectarian groups aimed at destabilizing the region,” including the Muslim Brotherhood, al-Qaeda and IS — a deeply ironic explanation, considering Saudi Arabia’s and the UAE’s own alleged financial involvement with terrorist organizations.

While Tunisia has taken a neutral position on the Gulf crisis, there has been some bias toward Qatar, as trade increased and the Qatari foreign minister visited Tunisia earlier this month. Turkish President Recep Tayyip Erdogan, an ally of Qatar, arrived in Tunis for a two-day visit yesterday.

Garrach was quick to point out that “what is happening between Tunisia and the UAE cannot be described as a diplomatic crisis,” although Cherif noted that “what started as a simple security decision became a crisis.” It’s not out of the question to wonder if Tunisia is being pulled into the Gulf crisis as “punishment” for its positive relations with Qatar.

“If the ban is indeed related to Emirati geopolitics,” Cherif speculated, “then this is just the beginning of a crisis that will soon transform into a wave of media and social media attacks, a withdrawal of ambassadors and may then even expand to the UAE allies in the region. Tunisia would then become a maverick country like Qatar.”