Tunisian political parties have been calling for the restoration of ties with the regime of Syrian President Bashar al-Assad six years after the former troika government expelled the Syrian ambassador. 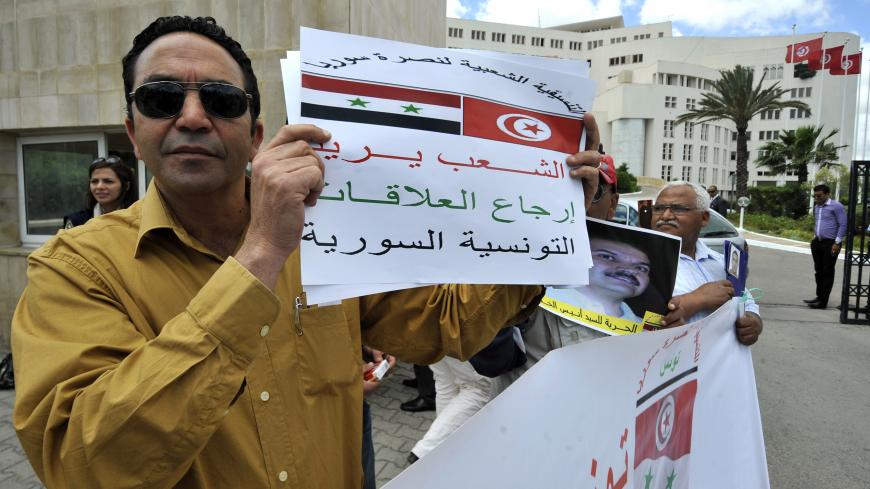 Tunisian protesters demonstrate outside the Ministry of Foreign Affairs calling on their Islamist-led government to renew diplomatic relations with Syria and the regime of Bashar al-Assad, Tunis, Tunisia, May 28, 2013. - FETHI BELAID/AFP/Getty Images

TUNIS — While Tunisia gets ready to welcome the 30th Arab League Summit in March, Tunisian political and partisan circles are calling for the resumption of official relations with the Syrian regime.

In 2012, the troika government made up of Ennahda, Ettakatol and the Congress for the Republic and led by former President Moncef Marzouki expelled the Syrian ambassador after accusing Syrian President Bashar al-Assad of crimes against his people.

In a statement signed by its leader Rachid Ghannouchi Jan. 3, Ennahda, a major partner in the current government coalition, called for “comprehensive national reconciliation that would give the Syrian people back their right to their land and to a democratic life, that would end the fighting and the resulting humanitarian tragedies and give Syria back its natural place in international and Arab organizations.”

Zubeir al-Shuhoudi, another Ennahda leader, told Al-Monitor that Ennahda’s changing stance toward the Syrian regime is the result of political considerations and a shift in Syria’s balance of power. Shuhoudi said that the party’s stance today resonates with that of Tunisian diplomacy and the Tunisian president's coordination with the Arab League member states to allow Syria to rejoin its Arab entourage and ensure its people’s security and stability.

He noted that the troika’s decision to cut ties with the Syrian regime was determined by the circumstances back then, when the Arab Spring swept first Tunisia and then other Arab countries. When the revolution erupted in Syria, the people’s main demand was for Assad to be ousted for the crimes he committed against Syrian protesters.

Shuhoudi underlined that resuming diplomatic relations with the Syrian regime will not erase the fact that Assad is a tyrant, oppressor and killer of his people.

On Feb. 4, 2012, Marzouki expelled the Syrian ambassador to Tunisia and withdrew any recognition of the ruling regime in Damascus.

Tunisian Foreign Minister Khemaies Jhinaoui told Tunisian Mosaique Radio Dec. 21 that his country looks forward to resending its full diplomatic corps to Syria. He added, “The Syrian government has started to recover and to restore its security after eliminating several terrorist groups. When the dust settles, we will make the necessary decisions to restore the deep-seated Syrian-Tunisian ties.”

He described Marzouki’s decision at the time as hasty and inconsiderate of the interests of the Tunisian diaspora present in Syria. The Foreign Ministry had to open a diplomatic office in Syria in 2015 to manage the affairs of the diaspora.

Jhinaoui visited Cairo Jan. 4 and delivered a message from President Beji Caid Essebsi to Sisi inviting him to the Arab Summit, according to a Jan. 5 statement from the Tunisian Foreign Ministry.

According to the statement, Jhinaoui informed Sisi of the preparations for the Arab Summit. He said they are working on “ensuring the success of this event to meet the expectations of the Arab people and countries, especially with the challenges the Arab region is facing.”

On Dec. 20, spokesperson for Nidaa Tounes Munji Herbawi told the Russian Sputnik Agency, “Party leaders welcome Syria’s return to its seat in the Arab League and the presence of the [Syrian] president at the Arab League Summit due in Tunis.” He added, “The party is convinced that Syria was facing a dirty and unjust war and that the Syrian regime was right.”

Nidaa Tounes parliamentarian Abdul Aziz al-Koti told Al-Monitor that diplomatic relations between Tunisia and Syria will resume soon. Koti met with Assad in March 2017 during an unofficial visit to Syria along with other parliament members. Koti said the visit was intended to pressure Tunisia to restore ties with the Syrian regime. He added, “Nidaa Tounes officially welcomes the resumption of Syrian-Tunisian ties, and we call on Beji Caid Essebsi to play his role as the primary person in charge of foreign relations by officially inviting Assad to the summit in March, in coordination with the Arab League.”

Koti further noted, “Severing ties with the Syrian regime was a huge mistake that the troika government committed due to foreign orders, especially from Qatar. It did not think about the interest of the Tunisian state. But it is time to fix this blunder.”

Another sign of the rapprochement between Syria and Tunisia was Tunisia’s authorization of the landing of the first Syrian regime aircraft in a direct flight from Damascus to Tunisia after seven years of flight suspension.

Social media activists posted on Facebook that the flight crowned the “public diplomacy” efforts of Syrians and Tunisians to pave the way for the resumption of relations.

All eyes are on the outcome of the 30th Arab League Summit in Tunis in March and its stance toward the Syrian regime. Observers believe the restoration of ties and Damascus reopening its embassy in Tunisia are a matter of time, especially after Bahrain and the UAE, which back the Syrian opposition, announced Dec. 27 that they would reopen their embassies in Syria.