The resumption of diplomatic relations with Syria has become an urgent matter for the Tunisian government, given the large number of Tunisian fighters involved in the Syrian war. 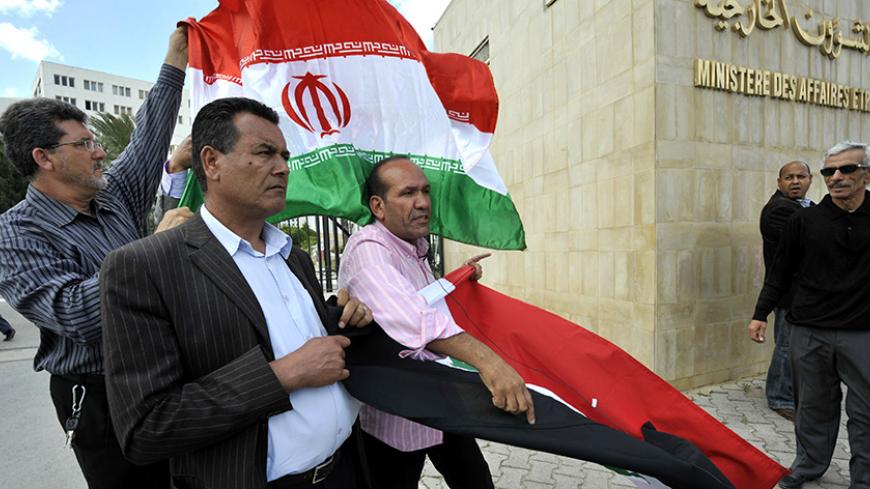 Tunisian protesters hold the Iranian and Syrian flags as they protest outside the foreign ministry in Tunis, calling on their government to renew diplomatic relations with Syria, May 28, 2013. - AFP PHOTO / FETHI BELAID

During a parliament session Jan. 4, Tunisian Interior Minister Hadi al-Majdoub revealed the presence of a Tunisian security office in Damascus and said daily security coordination was taking place between Tunisia and Syria, even though diplomatic relations have been severed between the two countries since February 2012. The security office seems to have been operating for a while now.

The resumption of security relations between Tunis and Damascus sparked speculation about the possibility of restoring diplomatic ties; this has long been a demand of Tunisian leftist and nationalist political parties and civic organizations.

The Tunisian government refuses to disclose details of the work of its security bureau in Damascus. However, it is clear that the security work is focused on the issue of Tunisian fighters operating with jihadi groups in Syria, mainly the Islamic State (IS) and al-Qaeda.

Tunisia has been witnessing political controversy and a major split on how to deal with the thousands of fighters returning from hotbeds of tension in Syria, Libya and Iraq. Tunisian President Beji Caid Essebsi, during his new year’s speech, placed their number at 2,926. He has estimated that there are about 3,000 Tunisian fighters in Syria. This is a drop from a July 2015 UN Panel of Experts report on the use of mercenaries, which estimated that there were 4,000 Tunisian fighters in Syria and 1,000 more in other hotbeds of tension.

It seems that the security coordination step with the Syrian side will be followed by other steps toward full normalization of relations between the two countries.

Tunisian writer and journalist Abdul Sattar al-Aidi told Al-Monitor, “It is true that opening a security bureau in Damascus was a necessary step to coordinate with the Syrian side with regard to the issue of Tunisian terrorists fighting there. But this step is essentially a political move, reflecting the shift in the Tunisian state’s position vis-a-vis the regime in Syria as opposed to its stance during the rule of the Islamic Ennahda Movement and its ally [then-President] Moncef Marzouki. The latter severed all ties with Syria suddenly in February 2012, to the detriment of Tunisia’s strategic interests. The security bureau does not operate on its own, but in the context of the work of the Tunisian Consulate in Damascus, which has been operating in Damascus since September 2015.”

Aidi added, “The major transformations and developments in the Syrian war and the victories achieved by the Syrian army in Aleppo and on other fronts, the Russian support, as well as the shift in stances of major powers such as Turkey that were demanding the departure of Syrian President Bashar al-Assad, have prompted many Arab countries, most notably Egypt, to work toward the re-normalization of relations with Syria.”

When Marzouki was president, Tunisia announced in February 2012 that it had severed ties with Damascus in protest of what it considered an oppression of popular protests in Syria.

Essebsi promised during his presidential election campaign in December 2014 to work on restoring Tunisia’s diplomatic ties with Syria, but then reneged on his promises in a May 2015 statement, noting that it was not in Tunisia’s best interest to have a Syrian ambassador return.

In April 2015, Tunisian Foreign Minister Taieb Baccouche announced his country’s intention to open a consulate in Syria and said Tunisia welcomed the return of the Syrian ambassador.

Essebsi later reflected on Baccouche's statements by saying, “The decision to dispatch a general consul or a charge d’affaires in Syria aims at taking care of the affairs of the Tunisian community there. This was what Mr. Baccouche meant to say in his statement, I believe. Other than this, Tunisia has not changed its policy toward the situation in Syria.”

In an interview with Euronews on Dec. 2, Essebsi said, “The decision to restore diplomatic relations with Syria ought to be taken within the context of an Arab decision. Tunisia is part of the Arab consensus and agreement." This shows how the relations between the two countries remain ambiguous and controversial.

Ahmed al-Mannai, director of the Tunisian Institute for International Relations, told Al-Monitor, “Tunisia’s ambiguous position vis-a-vis the full restoration of diplomatic ties with Damascus is due to external pressure. Although there is a general consulate in Damascus and also the security coordination bureau, Essebsi still refuses to talk about the resumption of diplomatic relations and the return of a Syrian ambassador to Tunisia, as he is still waiting for an Arab consensus on the issue."

Mannai added, “But the truth is that Tunisia fears pressure from donor countries such as Qatar, which opposes the Syrian regime and which pledged to grant Tunisia funds during the International Investment Conference held in November 2016 in Tunis. This is not to mention Western pressure, namely from the US, which does not wish to lift the embargo on Syria, should Tunisia agree to restore diplomatic relations with Syria. Therefore, the decision to resume Tunisian-Syrian relations depends on Tunisia’s sovereign decision-making apart from foreign intervention, be it Arab or Western.”

Tunisia has been witnessing weekly demonstrations since 2014 by popular and political groups demanding the restoration of diplomatic relations with Syria. The Popular Front, which is a coalition of 11 leftist, national and environmental parties and groups, demanded Jan. 17 that ties be restored between the two countries and that a Tunisian-Syrian supreme committee be established to look into matters concerning terrorists and the security situation.

In short, the resumption of diplomatic relations with Syria has become an urgent matter for the Tunisian government, given the number of Tunisian fighters involved in the Syrian war.

The jihadi groups have been dealt severe blows on the Syrian fronts, which pushed many to move to other fronts or return home. This is a prime concern for Tunisia, which is trying to collect as much information as possible about these fighters. Most of the valuable security data is to be found in the dossiers of the Syrian authorities. The latter, however, will not offer any information without a political price in return, the least of which would be full normalization of diplomatic relations. This would be a great political victory for Syria, because when Marzouki decided to sever ties in 2012, he was banking on the departure of Assad within days or months at the latest.