Tunisian President Beji Caid Essebsi sparked controversy when he said that authorities will not arrest jihadis that return to the country after fighting abroad. 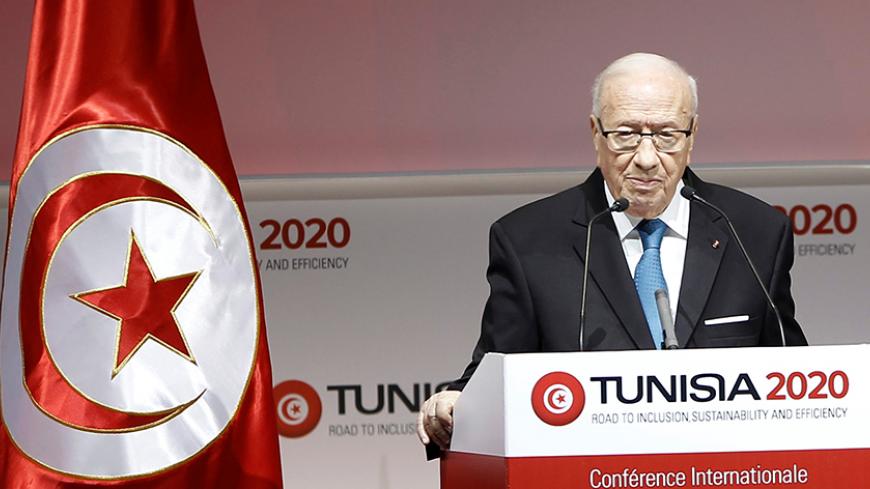 Tunisian President Beji Caid Essebsi’s statements on the return of Tunisian jihadis from areas of conflict sparked wide controversy in Tunisia. During a visit to France, Essebsi told Euronews Dec. 2, “Jihadis are no longer a threat, and many of them want to return home. We cannot forbid a Tunisian national from returning to his country. … We will not put them all in jail because we do not have enough space. We will take all necessary measures to keep them at bay. We will be watching them.”

Some thought the president was defending jihadis. Others were concerned about the ambiguity of the state’s stance toward Tunisians returning to Tunisia from battlefields in Syria and Iraq. Either way, the controversial statements revealed Tunisian authorities' lack of a clear plan to solve the issue of returning fighters, raising concerns about the security challenges that it might entail.

Meanwhile, the Tunisian presidency issued a statement Dec. 7 to clarify the president’s stance: “The president ensures the respect of the Tunisian Constitution, which stipulates in Article 25 that no citizen shall be stripped of their Tunisian nationality, exiled, extradited or prevented from returning to the country. Returning to one’s country is a constitutional right, and no citizen can be refused this right, regardless of the reasons. The president also asserted that all necessary security and political measures have been taken to keep the threat of the return of Tunisians from areas of tension at bay. Article 33 of Anti-Terrorism Law No. 26 of 2015, dated Aug. 7, 2015, related to fighting terrorism and banning money laundering, considers any person who traveled abroad to commit a terrorist crime a terrorist punishable with prison.”

Ahmed Mannai, the head of the Tunisian Institute for International Relations, told Al-Monitor, “The stances regarding terrorists returning from areas of tension varied between complete resentment, demands to strip them of their citizenship and calls to pardon them. The talk about pardons pushed the head of the Ennahda movement, Rachid Ghannouchi, in August 2015 to call for keeping the repentance door open to those returning. Apparently, Ghannouchi is trying to convince his ally, Essebsi, to adopt a similar stance. A step toward pardoning these people without prosecuting them undermines the right of their victims in Syria, Libya and Iraq to a fair punishment guaranteed by international law.”

Mannai added, “The president said in his statements to Euronews that the returning fighters won’t be jailed. The presidency later clarified that any returning terrorist must be jailed. The conflicting stances reflect a lack of vision from the state in this regard and show the officials’ irresponsibility toward perpetrators of heinous war crimes.”

The defeat of the Islamic State (IS) in Syria, Libya and Iraq rekindled security concerns about the return of thousands of fighters to Tunisia from the battlefields. A May 2016 UN report revealed that after IS suffered field losses, it encouraged its foreign fighters to return to their homelands to carry out terror attacks.

The Tunisian Ministry of Interior announced in early 2016 the return of 600 young people who had fought in different areas. The ministry had stated in November 2015 that it had put 92 returning fighters under house arrest and arrested 40 others during raids that took place following a suicide bombing of a presidential guard vehicle in Tunis.

Hadi Yahmed, an independent Tunisian researcher on Islamic groups, believes that the security solution alone is not enough to resolve this thorny issue. “We must all think about reasonable and radical solutions to this phenomenon," he told Al-Monitor. "Prisons are a temporary solution. So are expulsion and exile. But none of these solutions will eradicate terrorism because they are just security measures. Eradicating terrorist thought might require bolder future generations. At this stage, we do not have many solutions at hand. Perhaps the most reasonable one is to convince some youths in jail to re-examine their ideas and realize that they can practice their religious convictions, provided that they draw the line at violence. Otherwise, we will keep running in circles until kingdom come.”

A July 2015 UN report on the use of mercenaries revealed that more than 5,000 Tunisians are fighting in different hotbeds across the Arab world. Interior Minister Hedi Majdoub announced in June 2015 that the security apparatus “devised a special plan to deal with returning youths from battlefields," saying, "Those implicated in criminal activities are behind bars.” Nevertheless, many fear that jails could turn into recruitment hubs for jihadis.

Tunisian authorities do not have many options to deal with those returning from Syria, Libya and Iraq. So far, they only have security solutions, but these will not be effective in the long run in the absence of a plan to limit extremism and rehabilitate jihadis. Any attempt to propose a pardon law or a civil harmony act, like the one in Algeria, will face public rejection, especially from influential social forces and syndicates in the country, notably the Tunisian General Labor Union.