How will Tunisia deal with thousands of returning jihadis?

Tunisian officials are caught between their international obligation to process and prosecute returning militants and the public's desire to see them banished. 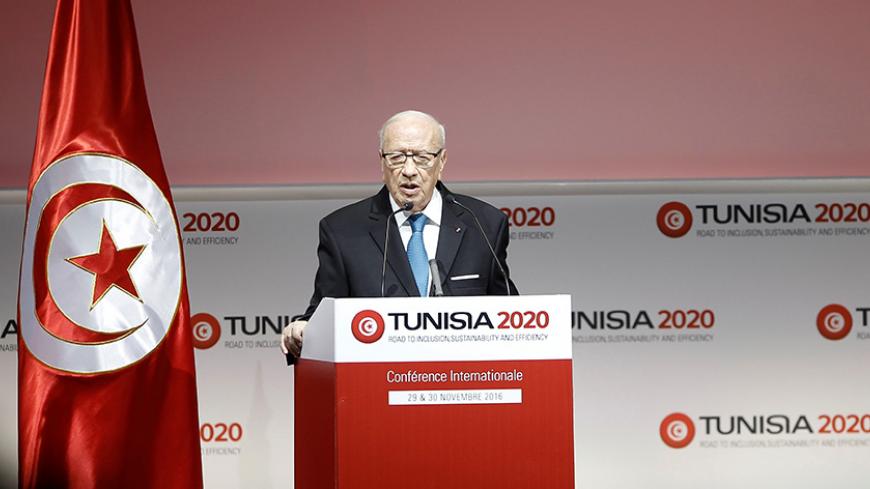 The return of Tunisian fighters from conflict zones in Syria, Iraq and Libya has Tunisia torn. The Tunisian authorities are torn between public pressure to revoke the citizenship of the returning terrorists and the state’s international commitments that necessitate a minimum of cooperation with other countries to hand over Tunisians suspected of links with jihadi groups.

In his latest speech on New Year’s Eve, Tunisian President Beji Caid Essebsi firmly stated that Tunisia “will implement the law against Tunisians returning home from battlefields in Syria, Libya and Iraq and will not welcome them with open arms.” Essebsi had previously said in an interview with Euronews on Dec. 2, “Jihadis are no longer a threat, and many of them want to return home. … We will not put them all in jail.”

On Dec. 30, Prime Minister Youssef Chahed declared that his government “will treat those returning home with strictness and will prosecute them upon their return.” Despite his reassurance, controversy spread among Tunisians divided on how to handle the fighters returning home from conflict zones abroad.

On Jan. 7, many Tunisians took to the streets of the capital, Tunis. In response to the call of civil society activists and intellectuals, they condemned “the return of terrorists from conflict zones.”

Umeira al-Saghir, a historian and history teacher at the Higher Institute of the National Movement History who participated in the protest, told Al-Monitor, “As a citizen, I realize that Tunisia is undergoing the worst phase of its modern history with the return of thousands of terrorists. It is getting ready to welcome at least 3,000 people who espouse jihadi thought and are trained in fighting, looting and raping. Those jihadis are returning home defeated and full of desire for retaliation. Many Tunisians have seen videos of the terrorists threatening to slaughter Tunisians.”

Saghir added, “I think that the right thing to do is strip these terrorists of their Tunisian citizenship. The 1963 citizenship law, which was amended in 2010, allows stripping any Tunisian of his citizenship if he or she commits a crime, joins a foreign army or participates in the destruction of a neighboring state and pledges allegiance to another. Returning terrorists won’t be able to escape the 2015 Counterterrorism Law, but [nevertheless] many condemn the judiciary’s lax behavior toward terror suspects.”

Tunisian journalist and political analyst Abdel Sattar Aydy told Al-Monitor, “Tunisian fighters in conflict zones abroad will not return collectively or in an organized manner. Their return is rather forced by their situation in the regions where they are fighting.”

He added, “The defeat of jihadi groups, especially the Islamic State in Libya, Syria and Iraq, has pushed some fighters to seek refuge in other areas. They know that they are on Tunisia’s terror blacklists. They wouldn’t get into the country without facing likely arrest. For that reason, they would rather search for other battlefields than return home.”

Aidi noted, “Tunisia cannot refuse to accept the return of terrorists who were arrested abroad, due to its diplomatic relations with the international community. It has to bear its legal and political responsibilities by receiving its citizens who are accused of terrorism and prosecuting them under the law. Otherwise, Tunisia would face political and legal risks with dire consequences. The Tunisian authorities certainly do not want those terrorists and will not seek to repatriate them. But they have to cooperate with the international community.”

Amid the heated debate, the Tunisian authorities have started to receive militants accused of affiliation with jihadi groups abroad. On Dec. 23, Counterterrorism Judicial Department spokesman Safyan al-Saliti said Tunisia was handed IS leader Moaz al-Fazani by Sudanese authorities. Fazani is accused of plotting for the Bardo National Museum attack in March 2015 and attempting to bomb Habib Bourguiba Kindergarten in October 2013. He is in jail awaiting trial.

On Dec. 30, Tunisia received from Italy the terror suspect Nasreddin Bin Diab, who has been implicated in several cases. Diab is alleged to have been part of a cell active in the suburbs of Milan and planning to conduct operations in Tunisia and abroad. Diab is also imprisoned awaiting trial.

On Jan. 1, the Tunisian Interior Ministry announced in a statement, “An intelligence coordination operation has managed to bring back the dangerous Tunisian terrorist Wanas al-Faqih, who had escaped abroad.” The Tunisian authorities revealed no details of the operation, but the statement noted, “Faqih was connected to terrorists affiliated with al-Qaeda in the Islamic Maghreb (AQIM) and he is accused of joining a terrorist organization and manipulating sleeper cells and networks to implement terrorist acts.”

Essebsi had announced in his New Year speech, “The number of Tunisian terrorists affiliated with terrorist groups in Syria, Libya and Iraq is estimated at 2,926. The authorities know all the details about the number of Tunisians fighting in conflict zones and their deployment in different countries.”

Another UN report published in May 2016 warned that IS, following its field defeats, had started encouraging its foreign fighters to return to their hometowns and implement terrorist attacks there. The Ministry of Interior announced in early 2016 the return of 600 young men who had been fighting in different Arab conflict zones. The ministry also said in November 2015 that 92 Tunisian jihadis had been placed under house arrest upon their return.

Minister of Justice Ghazi Jribi revealed during a Jan. 2 parliamentary session, “There are 160 Tunisians returning home from conflict zones. Sentences have been issued for some of them, while others remain in Tunisian jails. In total, there are 1,648 arrested suspects accused of terrorist acts.”

The Tunisian government announced Dec. 30 that it is “examining the possibility of building a jail to accommodate those returning from conflict zones.” Overcrowded Tunisian jails have always been considered a rich environment for jihadis to recruit more members.