Crown Prince Mohammed bin Salman was greeted in Tunisia by hundreds of protesters, blaming him for the murder of journalist Jamal Khashoggi and calling for an end to the Saudi-led military campaign in Yemen. 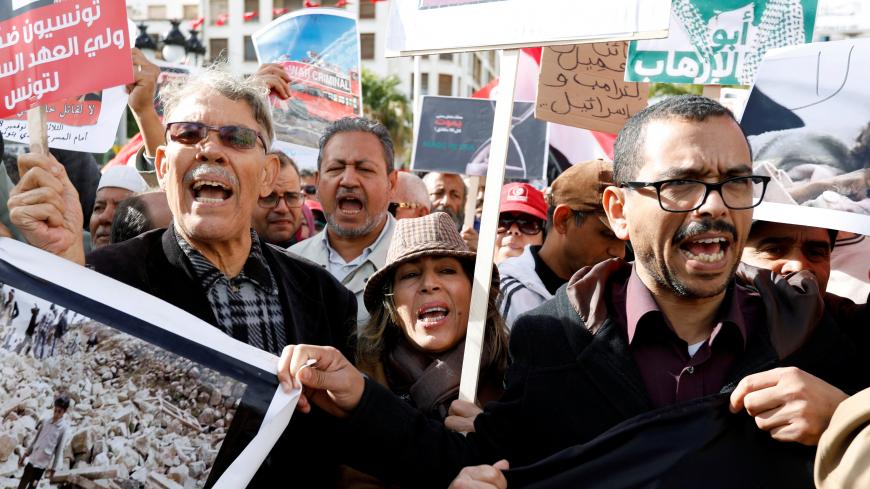 “There is only one country in the Arab world that has been classified as 'free.' That nation is Tunisia,” slain journalist Jamal Khashoggi wrote in his final piece for The Washington Post, which was published posthumously on Oct. 17. It was an instance of macabre foreshadowing.

During Saudi Crown Prince Mohammed bin Salman’s regional tour last week ahead of the G-20 summit, Tunisia was the only Arab country in which citizens mobilized online and organized demonstrations in the street. As soon as people heard about the visit, which was announced Nov. 22, a Facebook event was organized — and it quickly went viral. A number of civil society activists and organizations from a range of political and ideological backgrounds threw their weight behind the protests, including the powerful Journalist Syndicate. Protesters nicknamed Mohammed "Abu Monsar" ("Abu Saw" in Arabic) and carried corresponding props.

“[Mohammed] is unprecedented in his ways of oppressing his people,” said Tarek Kahlaoui, a political activist and one of the main organizers of the protest. “Never before [has] an opposition figure [been] killed and dismembered in an embassy, [which is] usually a safe haven. … His campaign in Yemen [is] similarly brutal — even though covered by anti-Shiite sentiments. [We remember] the way he treated members of the Saud family, and we can’t forget the abduction of the Lebanese prime minister and forcing him to resign. Because he’s unique in his despotism, many Tunisians felt the obligation to protest his visit.” Saudi Arabia also played host to Tunisia’s former dictator, Zine El Abidine Ben Ali, after he fled the country in 2011, a fact not lost on protesters.

It’s been eight years since Tunisia’s 2011 Jasmine Revolution, which saw the country emerge as the only regional success story following the Arab Spring. But while freedom of expression might be one of the country’s biggest gains, it’s also clear that Tunisia — which has seen an economic slump, crippling IMF loans, high unemployment and a devalued currency — still has to play by the rules of its larger, richer neighbors. Highly publicized protests didn’t prevent Tunisian President Beji Caid Essebsi from enthusiastically meeting with Mohammed, who during his four-hour visit offered Tunisia a low-interest $500 million loan. The international media might have paid attention to the protesters, but Essebsi — and a slew of other politicians — did not.

Mohammed’s tour, which saw stops in Bahrain, the United Arab Emirates (UAE) and Egypt (where paid supporters cheered on the royal’s arrival and the Egyptian press dubbed it “a protest of love”), was meant to show to the world that despite the Khashoggi murder, Saudi Arabia was open for business as usual. He strategically chose to visit close allies, which would ostensibly help ease his transition into the G-20 summit in Argentina. It’s still not clear why Mohammed picked Tunisia.

“Why Tunisia is a big question. Is it to show that he is open to Qatar's and Turkey's allies? Is it rather to score against Qatar and Turkey in their sphere of influence? Is it to show the West that even their spoiled democracy cannot resist him? I don't have a definitive answer,” Tunis-based political analyst Youssef Cherif told Al-Monitor.

As Al-Monitor reported last year, Tunisia regularly finds itself in a precarious position with Gulf countries as it navigates its own democratic transition. Tunisia has tried to retain a level of political and economic balance — unwilling or unable to truly upset anyone — but it hasn’t always been easy. Prior to the revolution, the UAE was Tunisia’s second largest Arab investor. In 2011, following the political victory of the moderate Islamist party Ennahda, the UAE halted investments; two years later they withdrew their ambassador and began openly supporting Essebsi’s secular party, Nidaa Tounes. When Nidaa Tounes allied with Ennahda in 2015, the UAE responded by denying visas to Tunisian businessmen. Last year, they temporarily banned Tunisian women from flying into the country.

For the past several years, Tunisia’s largest Arab investor has been Qatar — a staunch supporter of Tunisia since the revolution. In fact, Qatar has been investing in Tunisia since the 1990s. Unlike the UAE, Qatar was pleased when Ennahda took power and further expressed sympathy when they allied with Nidaa Tounes. When Qatar was effectively ostracized from the Gulf Cooperation Council (GCC) in June 2017, there was concern that other Gulf countries could retaliate against Tunisia.

Though Saudi Arabia led the charge against Qatar, their relationship with Tunisia is more conciliatory. “Saudi Arabia … has continued to invest in Tunisia, pledging almost $1 billion in 2016 at the Tunisia 2020 conference. They have also strengthened military ties, forming a joint military commission in 2016 and hosting their first-ever joint air exercises in Tunisia in October,” Sharan Grewal, a post-doctoral research fellow at the Brookings Institution, told Al-Monitor.

If, however, Tunisia is afraid a rapprochement with Saudi Arabia might upset Qatar, Cherif notes that both Qatar’s prime minister and Turkey’s president were invited last year, “so the visit of [Mohammed] can be portrayed as a continuation of Tunisia's balanced foreign policy, which avoids encampment.”

But Tunisia, uneager to upset the delicate balance within the GCC, has not been as strong of a partner as Saudi Arabia might have imagined. “Saudi Arabia has not received much in return for its investment. Tunisia remained relatively neutral during the GCC-Qatar spat and has not contributed much more than statements of support for the war in Yemen. Tunisia mildly criticized the murder of journalist Jamal Khashoggi but primarily emphasized that it wished to maintain strong relations with the kingdom,” Grewal pointed out.

Analysts agree that Tunisia’s political and economic relationship with Saudi Arabia is one that is likely to continue this pattern. But Saudi Arabia, which is more at ease with countries that have a dictatorial grip on their citizens’ speech and movements, might have underestimated Tunisia’s democratic gains. “The fact that no one was harassed or jailed for staging these protests and mocking [Mohammed] online and in the media shows how advanced freedom of speech has become in Tunisia,” said Cherif. “This has probably angered [Mohammed] and his regional allies and will be one more reason for their hostility toward Tunisia's democratic transition.”

Organizers of the protests were not surprised that Essebsi followed through with his meeting with Mohammed, but they were pleased by one development: Following the Journalist Syndicate’s official complaint against [Mohammed], the Court of First Instance ordered an official investigation by judicial police. The complaint urges Tunisia to refer Mohammed to the International Criminal Court for war crimes. How much the judge was directly impacted by the protest is unknown, but, as Grewal notes, “It shows that what Tunisia has — and other Arab regimes lack — is not just the freedom to protest [Mohammed's] visit. It's also the rule of law to be able to file such a complaint and the independent judiciary to act upon it.”

Kahlaoui, one of the protest’s main organizers, agrees. “It shows the importance of public protesting. It shows the power of journalists who called for the investigation. And it shows the increasing independence of the judiciary. Overall it’s just another indication of the survival of our young democracy.”