Russian tourists are returning to Turkey’s relatively warm climes as relations between the countries thaw. 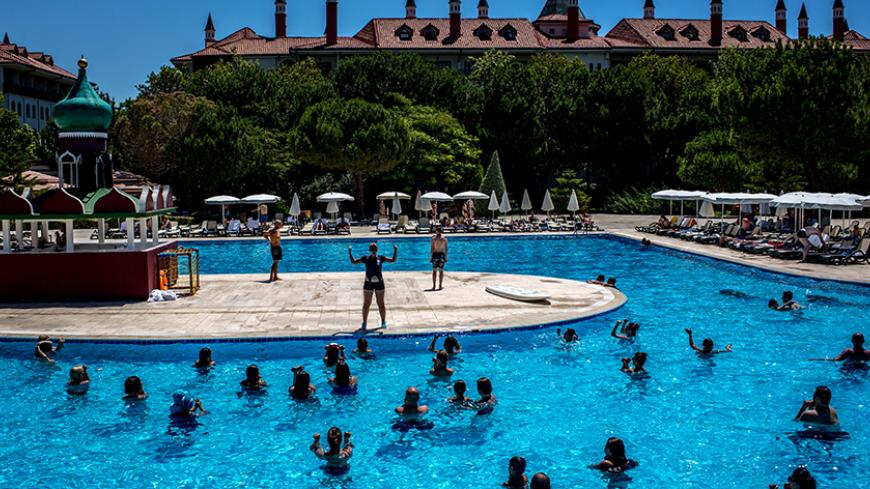 In a sign of improving relations, Moscow will be hosting this year’s Turkey Festival, which runs June 16-18. The event is being organized by Turkish authorities, civil society organizations and businesspeople in cooperation with Moscow city authorities. The festival’s budget is pegged at $1.2 billion, and organizers hope more than 100,000 Russians will participate.

Many of the event’s organizers are tourism business associations and organizations.

“We want to present Russians with our history, culture, sights and our country,” festival coordinator Haluk Ozsevim told Al-Monitor. “We should keep in mind that Russian and Turkish peoples have been good friends for many years. And both miss each other.”

Relations between the countries have been tense since Turkey shot down a Russian jet in November 2015. Russia subsequently imposed sanctions that severely hurt Turkey’s trade and tourism sectors. The restrictions forbade sales of organized tours and charter flights to Turkey, and tourists who made their own arrangements had to pay twice as much as before. The number of Russian tourists visiting Turkey plummeted: In 2016, only 500,000 Russians came, compared with 3.3 million in 2015 and 4.1 million in 2014.

Overall, according to the Turkish Association of Travel Agencies, the number of foreign tourists visiting Turkey plunged to 31.4 million in 2016, from 41.6 million tourists in 2015. There were many reasons, in addition to the jet downing, for the loss of 10 million tourists. The July 15 coup attempt, along with several big terror attacks in 2016, raised security concerns among European tourists.

Between 2011 and 2015, Turkey had seen a gradual rise in arrivals from Germany. But in 2016, there was a sharp decline, according to a Hotels Association of Turkey statement.

The drop-off in the number of European tourists is expected to continue this year. “We expect a dramatic decrease in the number of arrivals from European Union markets, mainly from Germany, Austria, Belgium, France, Spain and Italy over this year due to ongoing concerns and some political tension,” Hotels Association President Timur Bayindir told Turkey’s Hurriyet Daily News.

In addition to fears over security, some Europeans have stayed away in protest of the April 15 constitutional referendum that granted the Turkish presidency greatly expanded powers.

However, Bayindir noted that he expects to see an increase in tourists from the Middle East, Iran and Russia.

Figures from the Turkish Ministry of Culture and Tourism show that for the month of April, overall foreign tourist arrivals to Turkey rose 18% over April 2016 to just more than 2 million, the Daily Sabah reported. The largest increase was reported among Russian tourists, with that number surging almost 500%, to reach 181,865 people.

Positive news has also come from the Russian side. According to an early May story in the Russian business daily Vedomosti, the biggest travel agencies confirmed the majority of their clients are booking May trips to Turkey, as opposed to other locations. One tourism executive attributed the increase to pent-up demand.

“Russian tourists have been waiting for this [the opening of Turkish destinations] since November 2015. We explain it as a deferred-demand effect,” Pegas Touristik CEO Anna Podgornaya said in explaining Turkey’s popularity to the Russian media. She added that Russian currency stabilization and discounts offered by Turkish businesses also play important roles.

Dmitry Malyutin, the CEO of Moscow-based Level Travel Ltd., said more than 25% of his company’s clients have already visited Turkey this year.

“The demand for Turkey among Russian tourists is high, and it is growing rapidly,” he told Al-Monitor. “Last year the most popular travel destinations were Russian resorts, Greece and Cyprus. This year we predict that Turkey will be the leader, although Greece and Cyprus remain popular as well.”

A recent public opinion survey also offers hope to Turkey’s tourism sector. According to the Russian Public Opinion Research Center, many fewer Russians perceive Turkey as a hostile state this year. In 2016, 70% of the survey’s respondents didn’t look favorably on Turkey: 47% said Turkey-Russia relations were “tense,” and 23% said they were “hostile.” Today, according to the research center, those numbers have dropped to 24% and 4%, respectively. The survey reported that 21% said relations remain “chilly.” Almost one in four respondents described relations as “neutral” with 8% saying they were “neighborly,” 6% “friendly” and 5% “quite warm.” Overall, positive attitudes still trail negative ones, but the progress is evident: 51% of those surveyed agree the relationship is progressing; in 2016, only 6% saw progress.

The 2015 crisis over the jet downing became a real test for Russian-Turkish relations, which showed how politics prevail over rational relations between the two peoples and how state media can easily create an image of “the enemy.” However, as recent news shows, Russian attitudes toward Turkey are changing and Russians are returning to Turkish resorts. Thus, the Turkey Festival in Moscow could be a great contribution not only to the ongoing process of normalizing bilateral ties, but also to overcoming bad — and mostly wrong — stereotypes between Russians and Turks.