Turkey’s tourism sector is recovering from the 2016 downturn as more visitors arrive from Asian and Middle Eastern countries. 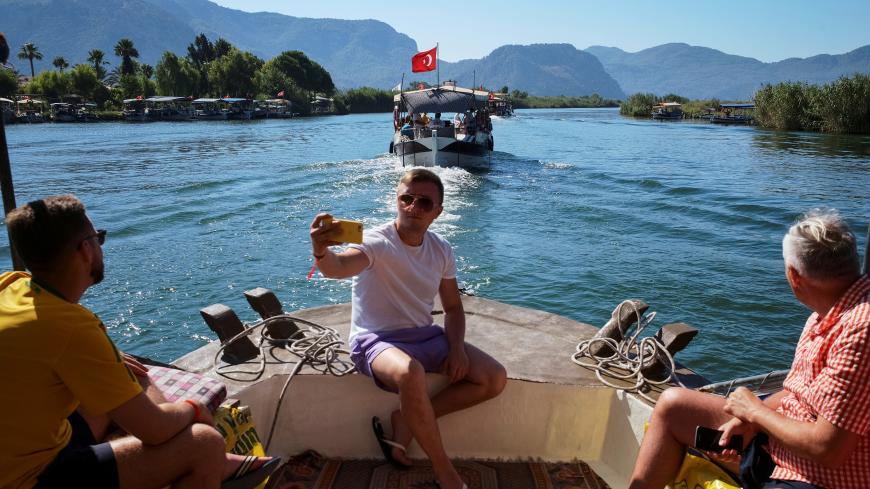 Tourists ride at a local cruise boat on the Dalyan river to Iztuzu Beach near Dalyan in Mugla province, Turkey, Aug, 12, 2019. - REUTERS/Gleb Garanich

Nancy Siegers and her partner Cemil Deniz opened a hotel in central Antalya days before the Turkish lira collapsed in August 2018. Siegers, a Dutch national living in Turkey, said business was rough through the fall and winter at her boutique hotel in the historic Kaleici district, but she has seen a gradual turnaround in recent months.

Speaking inside the family home-turned-bed & breakfast, which she named “Nensie’s” in line with Turkish phonetics, Siegers said her rooms were fully booked for the Muslim holiday of Eid al-Adha. The rise in summer bookings had been a welcome surprise.

“We are very happy that this was a successful holiday for us,” Siegers told Al-Monitor. “For the first year, I guess we’re doing quite well.”

Down the street, Siegers and Deniz have also been running Cay-Tea’s Lunchroom for the last five years. She said business is recovering there as well after visitor numbers dropped steeply in 2016 following a spate of political instability in Turkey.

Her experience reflects wider trends in the nation’s tourism industry, which had grown exponentially in the 2000s before peaking in 2014 and then falling as result of multiple terror attacks, including one at Ataturk airport in June 2016, and economic fallout spurred by domestic and foreign policy tensions.

Yet Turkey’s tourism sector appears to be rebounding. In the first six months of 2019, the number of foreign visitors in Turkey rose 11.3% year-on-year, according to the Turkish Ministry of Culture and Tourism. During the recent Eid Al-Adha holiday, some resort areas in Antalya, the nation’s main tourism hub, reported 100% occupancy rates, showing that vacationers were returning to Turkey, which remains among the top 10 most visited countries in the world.

The sector’s recovery has been a boon for the still-ailing Turkish economy, but hotel owners and tour operators noted a significant shift in the profile of people visiting from abroad. A growing share of Asian and Middle Eastern tourists have been filling hotel rooms traditionally booked by European visitors, who continue to vacation in Istanbul and Antalya, though in markedly fewer numbers since 2016.

The change has helped business owners dependent on tourism stay afloat, and some view the diverse tourist profile as a good sign for the sector’s long-term sustainability.

“This year, we haven’t had any European guests,” Baris Senyuz, the manager of Minyon Hotel in Antalya, told Al-Monitor. “Before, two or three years ago, most of our guests were from Germany, Norway, Canada, the US, France and Holland. Now, they are mostly Arab and Chinese.”

Senyuz said the hotel’s finances remained stable through the shift. Turks comprise a constant 25% of his clientele, and new clients arrived organically, he said, as the hotel had not modified its marketing strategy. He believes the demographic change is the result of changes in Westerners' perceptions of Turkey.

He there was a clear change in his customer profile in March, after Germany’s Foreign Ministry issued a travel advisory warning citizens they would risk arrest in Turkey for expressing controversial political opinions. But all-inclusive resort hotels in Antalya continue to host large numbers of European tourists, many of whom choose Turkey for its proximity and favorable exchange rates.

“Turkey continues to be a 2019 tourism hotspot for Brits and it remains our second-most-booked destination for package holidays,” Will Waggott, chief of tour operations at Thomas Cook, a travel agency based in London, told Al-Monitor in a written statement.

In its 2019 Holiday Report, Thomas Cook noted bookings for its Turkish travel packages had increased 27% compared to 2018. Competitive prices and the natural beauty of Turkey’s Mediterranean coast continue to draw tourists undeterred by political instability in the country. Such trends have helped the sector rebound to pre-2016 levels.

According to the Association of Turkish Travel Agencies, about 35.6 million foreign tourists visited Turkey in 2015. The number fell to 25.3 million in 2016, then rose to 32.4 million in 2017 and 39.5 million in 2018. The Ministry of Culture and Tourism estimated tourism contributed $29.5 billion to the nation’s economy in 2018, and revenues are expected to grow further in 2019. As the nation’s economy remains in recovery mode, Ankara will seek to bolster state revenues with new taxes on the tourism sector starting this October.

Russian tourists have also played a role in the recovery following a 2015 diplomatic fallout between the two nations after Turkish forces shot down a Russian jet near the Syrian border. Russians currently make up 13.1% of foreign visitors in Turkey, while travel agencies are increasingly working with Chinese tour groups and Arab clients.

Such demographic changes are also felt away from Turkey’s coasts in Cappadocia, a historic region in central Anatolia known for its intricate cave dwellings and hot air balloon tours. Goknur Eren, who has been a reservation manager at Kapadokya Balloons for 10 years, said the company’s customer profile has changed from Europeans and Australians to mostly Asian-origin clients in her tenure. The rise in Chinese tourists has increased the demand for balloon tours and she says her company is struggling to meet it.

“Normally, we were only busy April to May and September to October,” Eren told Al-Monitor. “It’s the whole year now.”

But not all regions in Turkey have benefitted from the tourism recovery. Historic cities and attractions in the nation’s Kurdish-majority southeast receive a fraction of the visitors that used to frequent the area before the collapse of the Kurdish peace process in 2015.

“People still think it’s dangerous in the east of Turkey,” Berry Vos, co-owner of Mithra Travel, a tour operator based in Antalya, told Al-Monitor. “It’s a shame because we used to have nice hiking tours on Mount Ararat.”

Vos said she has virtually discontinued once popular tours to Lake Van, Midyat, Mardin and Nemrut Mountain as result of ongoing military operations in the east. Having run her business since 1992 with a mostly European clientele, Vos said she believes Western tourists are avoiding Turkey, opting to visit other Mediterranean countries like Greece or Spain instead.

“The image of Turkey is still not good in Europe,” Vos told Al-Monitor. “It is good in Pakistan, in Palestine, in Arab countries, so the people coming now are from those countries.”