A new law claiming to protect the natural beauty of Cappadocia strips municipal governments of decision-making powers and oversight, handing authority over the future of the region to a panel whose leader is appointed by the president. 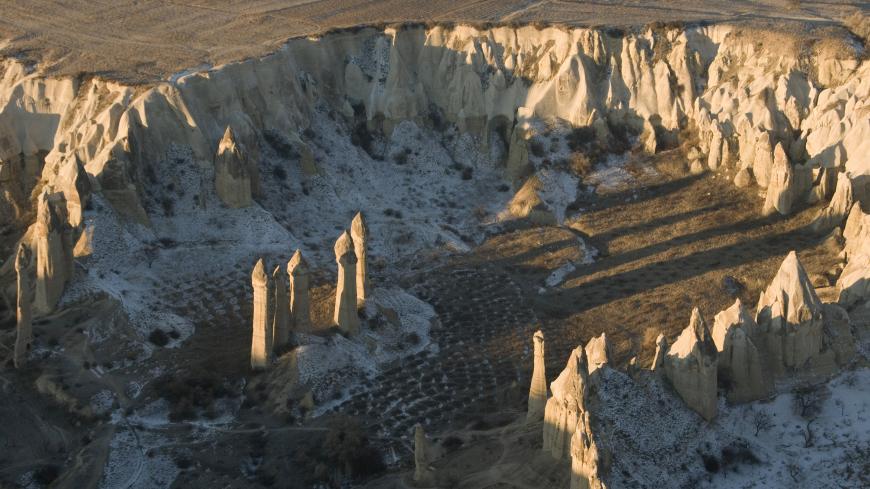 Cappadocia’s "fairy chimneys,” cone-shaped rock formations, are not only unique in their natural design but in their historic value — early Christians used the caves below them as underground cities to hide from persecution. You can still see frescoes in the underground churches and other remnants of a culture dating back to 2000 BC. Tourist guides say the word Cappadocia originates from Persian, meaning “the land of beautiful horses.”

At times the region appears to be overrun with hot air balloons carrying sightseers; trash seems ever present and there are serious air and water pollution problems. There are many haphazardly erected tall buildings; although parts of Cappadocia are in a protected zone, illicit construction sites are everywhere.

The region, located in central Anatolia and encompassing several ancient cities such as Nevsehir and Kayseri, hosted approximately 3 million tourists in 2018. The numbers of visitors — both Turkish and foreign — have significantly increased over the past decade. This comes, however, with environmental degradation caused in great part by illicit construction.

On May 24, the Turkish parliament quietly passed a bill titled “Kapadokya Alan Baskanligi” (“Cappadocia Area Directorate”), which became law June 1. The pro-government media has presented it as a way to protect the region, while a few critical voices raised red flags about the potential threats the law poses.

Al-Monitor asked experts why a new law was needed since the region is already under state protection. But architects, engineers, historians, members of local NGOs and hotel owners only talked on condition of anonymity, fearing they could lose their jobs or be threatened.

A prominent architect who has been working in Cappadocia over a decade told Al-Monitor, “There was a need for change because the current system generated a chaos in Cappadocia from an architectural standpoint. The multilayered bureaucracy — the local public administration in Cappadocia — was slow and complicated. Plus there were just too many hands in the pot. For example, if you wanted to get a construction permit through the proper track, it could take up to two to three years.”

In order to “regularize” irregular buildings, the government passed a special law on zoning — called Imar Barisi, literally translated as Construction Peace — but this became a bigger mess. This special law on zoning allows permits to be granted for buildings constructed illegally upon the payment of certain fees. “Thousands of commercial buildings were erected in the most inappropriate locations,” the architect said.

The new law minimizes the power of Ankara’s technocrats and municipal governments in the region. According to the new legislation, there will be a management council of seven people. This council’s rights are extensive when it comes to decision-making in Cappadocia. A historian and a member of a nongovernmental organization that seeks to protect the environment and nature in the region told Al-Monitor, “The chairman of the council is to be the governor of Nevsehir [province].”

In Turkey, governors are appointed by presidential decree, and the council chairman would answer to the president.

“How well will this council’s members or governor know the region to make such crucial decisions?” asked the historian, implying that the governor would make decisions at the president’s bidding rather than basing them on knowledge of the region’s heritage.

The president will also have the power to change zoning laws single-handedly under the new law. For instance, if there is an area that was declared a protected zone for historic value, one signature from Ankara would be sufficient to turn it into a residential or commercial building zone.

This, in turn, would enable big businesses to invest in the region promptly. There are already intriguing photos being circulated in the region of soon-to-be expected mega projects. One of them is of a mega-hotel that is to be shaped like a multicolored balloon — which neither agrees with the region’s national hues or architectural style.

Tezcan Karakus Candan, the president of the Ankara branch of the Chamber of Architects of Turkey, told Al-Monitor, “Allegedly the new law on Cappadocia is to protect the region. I say allegedly because this government has [already] destroyed the region with concrete. Their policies are designed to wipe off the traces of the region’s multicultural heritage. Those who are responsible for this destruction today claim to issue a law for protection. This protection is just a way to justify faster, single-handed management. In the name of protection, all decision-making powers are gathered in one hand.”

Candan said the region’s natural and historical heritage had already been harmed through illegal construction. But she fears that under the new law, damage could be done a lot faster and that it will all be legal. The quicker decision-making process — as nice as the word streamlining may sound — would also mean an end to deliberation and proper analysis.

All interviewees feared the new law is just opening the door for mega projects for short-term financial gain at the expense of this unique UNESCO world heritage site’s natural and historic wealth. Candan also said the new law conflicts with UNESCO's exhortations that there be open communication and oversight among all agencies involved. Candan raised a red flag, saying, “The areas that are not yet restored or excavated may be destroyed overnight” with this legislation. “We may not even know what has been lost and it will all be within the law,” she said.

A local activist and hotel owner told Al-Monitor, “Of course we would love more tourists, but more is not always better. Cappadocia is unique in its natural beauty but also quite special in its mostly self-sustaining family-run small establishments. Tourists used to come here to experience living on a simpler basis, not for five-star hotels with Olympic-size pools. Now it is more of what we call 'Instagram tourists' and we fear Cappadocia will face 'Antalya-ization.'” The reference is to the Mediterranean coastal town known for its natural beauty but that now is suffering under heavy construction.

“Thousands of tourists come in groups now only take a hot air balloon ride and that is it. There is little cultural tourism left and these numbers are not sustainable,” the activist added.

A scholar of city planning told Al-Monitor that statistics show that 30,514 hot air balloon trips were conducted in the region in 2018. "They carried 537,500 visitors in these balloons. This is on average 2,500-3,000 people per day. Now think about all the buses, cars used daily to shuttle these passengers. Think about how much propane gas is used for the balloon rides? For the balloon to take off properly they cut several trees, and had to flatten the surface. According to our independent measurements over 200 soccer fields' worth of area was flattened. Gradually, the hot air balloon trips have destroyed the natural flora and fauna of the area."

Candan and others concur that this law is the first reflection of the new presidential system on city planning. Municipal government powers have been stripped. Municipal governments are still subject to oversight, however minimal, by opposition party members in the districts. Now even this kind of supervision is no longer going to be possible.

Locals and Cappadocia lovers refer to the new legislation as the "looting permission law," indicating the region will be now more vulnerable to unsupervised building by major construction companies. There are already several grandiose hotel projects waiting for legal hurdles to be removed. If this law stays in effect, in a few years’ time it could destroy a significant portion of this historically and geologically precious area.