Scrambling to compensate for lost markets, Turkey’s tourism sector aims to attract 2 million tourists from Iran this year, but Ankara’s erratic foreign policy could throw this target into jeopardy. 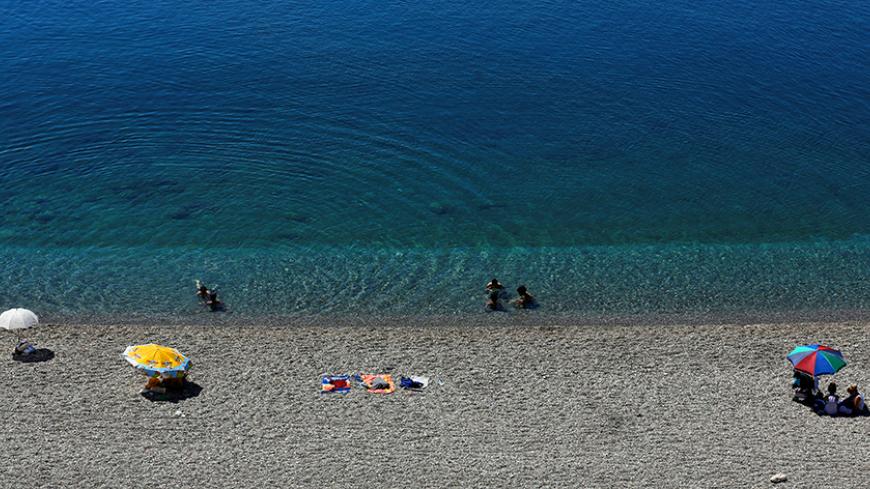 Tourists enjoy a beach in the Mediterranean resort city of Antalya, a popular destination for Iranian tourists, in Turkey, July 25, 2016. - REUTERS/Kaan Soyturk

On the night of July 15, 2016, while a coup attempt was unfolding in Turkey, two capitals — Moscow and Tehran — stayed on alert. Presidents Vladimir Putin of Russia and Hassan Rouhani of Iran were the first to call their Turkish counterpart, Recep Tayyip Erdogan, to express support for the elected government in Ankara.

Tehran’s support compounded Turkish hopes of expanding economic ties, which had been on the rise since Iran’s nuclear deal with world powers and the ensuing lifting of sanctions. Turkish entrepreneurs felt excited over the prospect of new opportunities in Iran amid expectations of a multibillion-dollar investment and development drive in the neighboring country.

Optimism was high also in Turkey’s tourism sector. In 2010, 1.9 million Iranian tourists had visited Turkey, and now, with Iran’s international isolation easing, the prospect of Iranians growing more prosperous boosted hopes that the number of Iranian tourists would shoot up as well.

Turkey’s review of its Syria policy, which brought it closer to Russia and Iran, provided an additional ground for better bilateral ties.

In February, however, Erdogan — on a Gulf tour that included Saudi Arabia, Qatar and Bahrain — lashed out at Iran for pursuing Shiite sectarianism and “Persian nationalism” in the region. Tehran responded in kind, and as a first fallout from the spat, a Turkish-Iranian business forum scheduled for Feb. 25 in Tehran was canceled. Investment and export deals worth at least $15 billion had been expected to be taken up at the gathering, in addition to plans to open a “Turkish Trade Center” in Tehran, the first of such overseas centers — all of which make up the backbone of Ankara’s new foreign trade strategy.

The spat dampened the mood also among Turkish tourism entrepreneurs, who had returned in high spirits from the Tehran International Tourism Fair only two weeks earlier, hoping that an increase in Iranian visitors would help revive the sector that was hit hard by the 2015 jet crisis with Russia and then the coup attempt. The loss of millions of tourists, mainly Russians, led to a $10 billion decline in tourism revenues in 2016. In assessment reports on the Iranian market, the Association of Turkish Travel Agencies and the Hotel Association of Turkey created a target of at least 2 million Iranian tourists in 2017, up from 1.7 million last year.

According to the figures, the flow of Iranian tourists in 2016 declined in the wake of the coup attempt as Tehran, citing security concerns, canceled charter flights to Turkey and stopped tour operators from selling Turkey trips. As a result, the number of Iranian tourists dropped 2.07% from 2015.

In general, Iranian tourists prefer Istanbul for shopping and sightseeing and the Mediterranean region of Antalya for resting. In recent years, Turkish Airlines has launched direct flights from Iran to other popular seaside resorts in Turkey such as Alanya, Bodrum and Marmaris. Apart from Tehran, the departure points of the direct flights to Turkey include Tabriz, Mashhad, Shiraz and Kermanshah.

Up to 8 million Iranians travel abroad every year, and their number is expected to increase fast. The top three destinations of Iranians are Dubai, Malaysia and Turkey.

Erdogan’s outburst against Iran, coupled with similar remarks by Foreign Minister Mevlut Cavusoglu, fanned bilateral tensions just as the Turkish tourism sector was hoping for an end to Tehran’s ban on charter flights.

On March 12, the Iranian consul-general in Istanbul said Turkey was not safe for Iranians to travel, and the Foreign Ministry in Tehran warned citizens to avoid Turkey, citing security concerns.

Iranian parliament Speaker Ali Larijani followed suit at a press conference the next day. A reporter from Turkey’s semi-official Anatolia news agency asked Larijani why Tehran advised citizens to avoid Turkey but never issued a similar warning for Iraq, where “terrorist incidents happen on a daily basis.” Larijani replied that Iranians traveled mainly to Karbala and Najaf in Iraq, which he described as safe cities “free of the terrorism problem,” according to Turkish media reports. In further remarks on bilateral relations, he charged that Turkey’s attitude and statements on certain issues “did not befit neighborly ties.”

Tehran’s travel warnings came ahead of the long Nowruz holiday marking the Persian New Year, during which many Iranians travel to Turkey. Despite the warnings, thousands of Iranians flocked by land to Turkish border cities, primarily Van, where preparations for them were in full swing. The Turkish authorities facilitated customs procedures for the Iranians, who received a warm welcome with flowers and drums in Van. Businesses across the city offered discounts of up to 50%, as the visitors went on shopping sprees.

Despite this bright episode, gloomy prospects seem to prevail in the Turkish tourism sector. Political tensions have flared also with Europe, especially the Netherlands and Germany, two big providers of tourists, over Turkish ministers’ insistence on campaigning in European cities with Turkish immigrant communities ahead of a critical referendum on constitutional changes next month. Tehran’s calls on its citizens to avoid Turkey coincided with Ankara’s simmering conflict with Europe, stoking fears of fresh economic fallouts.

Members of the Turkish tourism sector returned demoralized from the Berlin Tourism Fair earlier this month, grumbling that European interest in Turkish holidays has sharply declined, turning instead to Spain and Greece.

Thus, Iranian tourists have become even more important in efforts to prop up the sector, in addition to hopes that the Russians will return, as ties with Moscow have notably improved after Erdogan’s apology over the jet incident. Yet the tensions with Tehran signal that the target of 2 million Iranian tourists this year could be in jeopardy as well.

One recent development bodes further chill with Iran. Sponsored by Ankara, 50 Syrian tribal leaders convened March 14 in Turkey’s southern city of Sanliurfa, announcing plans to create an “Army of the Jazeera and Euphrates Tribes” to fight Russia, Iran, Hezbollah, the Kurdish Democratic Union Party and the Islamic State in Syria, according to Hurriyet. The tribal force will be under the command of the Free Syrian Army, which includes an array of factions trained and equipped by the Turkish military.

So Turkey is working with Russia and Iran to resolve the Syrian crisis on one hand, but on the other hand it is hosting an initiative for an armed force that intends to fight Russia and Iran. The fresh tensions and setbacks that this could create would inevitably extend beyond the political and military realm to inflict more damage on trade and tourism.