An end to international sanctions against Iran raises strong commercial prospects for Turkish companies on the Iranian market. 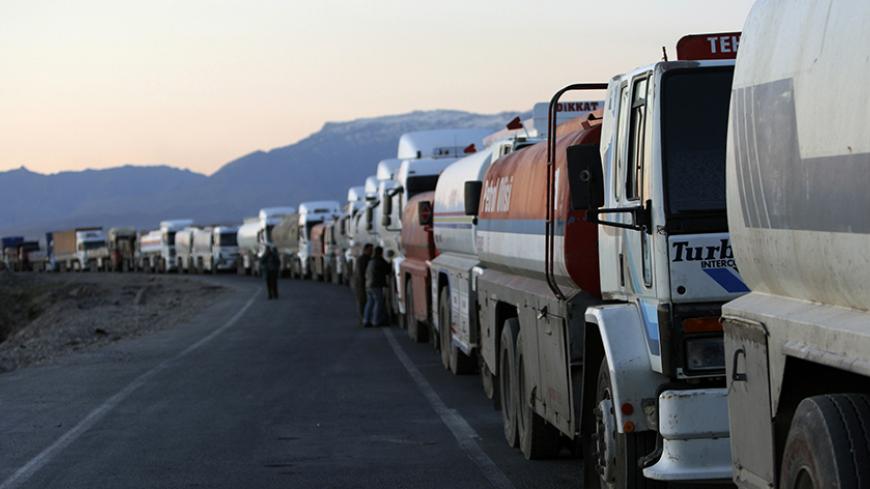 Turkish trucks and tankers queue on a road leading to the Habur border gate in southeastern Turkey, before crossing into Iraq with their goods, Feb. 23, 2008. - REUTERS/Fatih Saribas

The nuclear deal between Iran and the six world powers has put the spotlight on a giant Iranian market, long isolated from the global economy. Under international sanctions, Iran has been shut off from the global financial system since 2012, with $130 billion of Iranian Central Bank assets frozen in foreign banks. The July 14 deal has now raised the prospect of those assets being unlocked, which would mean a giant flow of cash into the Iranian economy.

The lifting of sanctions on Iran, the neighbor with which Turkey shares its second-longest border after Syria, has generated great excitement among Turkish companies, especially those in the industry, commerce, tourism and construction sectors.

Since the Eid al-Fitr holiday in mid-July, Turkey has experienced a virtual boom in Iranian tourists at a time when its vital tourism sector is going through difficult times. Amid a string of terrorist attacks, including the Islamic State’s (IS) massive suicide bombing in Suruc on July 20, nine Western governments, among them Germany and Russia, which provide the two largest groups of foreign holiday-makers in Turkey, have warned their citizens not to travel to Turkey or, if they do, to be aware of security risks.

During the Eid al-Fitr holiday, Iranians flocked to Turkey’s eastern border city of Van. Local stores and shopping malls, which had closed for the holiday, reopened. Scores of Iranians left their cars at the Van airport’s parking lot and boarded planes to Istanbul.

On Turkey’s southwestern edge, the popular resort town of Bodrum has also attracted hundreds of Iranians these days. Arriving on newly inaugurated regular flights between Tehran and Bodrum, wealthy and stylish Iranians are now vacationing in the region’s famous beach clubs and holiday villages.

About a dozen sectors in Turkey are especially interested in an Iran that opens up fast to the world and resumes long-deferred investments in a revived and growing economy. Turkish exporters’ unions and trade and industry chambers have been sending notices to members, urging them to get ready for a new era with Iran. Preparations are in full swing to send business delegations to Iran and organize fairs there.

Only days after the nuclear deal was agreed upon, Germany’s Vice Chancellor and Economy Minister Sigmar Gabriel headed to Iran with a group of business people. His visit to Tehran, the first by a Western statesman after the deal, signaled that Germany has set its sights on the Iranian market and that the competition there would be heated.

Turkey, too, is getting ready for the competition, mobilizing its business community and relying on advantages under its preferential trade agreement with Iran, which took effect on Jan. 1. The agreement, sealed after decadelong negotiations, entitles 125 mostly industrial Turkish products to reduced tariffs and other customs and quota advantages in Iran. In exchange, Ankara reduced tariffs and increased quotas for 140 Iranian goods, mostly agricultural products and food. Under the agreement, the total number of products benefiting from tariff reduction will increase from 265 to 300 at the end of 2015. Thanks to the accord, 13 Turkish sectors — tourism, plastics, chemicals, machinery, iron and steel, leather, textiles, retailing, logistics and freight, railway manufacturing and transport, food, metal industry and domestic appliances — will be strongly positioned on the Iranian market in terms of output, sales, export, investment and manufacturing.

A delegation representing the retailing sector is expected to visit Tehran on Sept. 1-4, with 35 Turkish brands planning to open 500 chain stores in Iran in the next three years. Similarly, a delegation from the metal and domestic appliances sector is scheduled to be in Tehran on Sept. 11-15 to hold talks with counterparts and sign sale contracts.

Turkish contractors and construction companies, meanwhile, are anxious over their prospects in Iran, worried by the competition of Western rivals, especially construction giants from Germany, Italy and the United States. Chinese and South Korean firms are also eager to play big in Iran. Turkish construction companies entered the Iranian market in 1983. By 2012, when the sanctions hit, they had undertaken projects worth $4.1 billion. Marble and cement producers could also find it hard to compete in the Iranian market as local companies will have the advantage of Iran’s lower energy costs.

Turkey’s Economy Ministry hopes the annual trade volume with Iran will reach $35 billion or even more in 2016 as exports increase in the sectors covered by the preferential trade agreement.

In remarks after the announcement of the nuclear deal, the head of the Turkish Exporters Assembly, Mehmet Buyukeksi, voiced optimism that the agreement would have a positive impact on the Turkish economy and exports, providing a major alternative to trade routes blocked by conflicts in Syria and Iraq.

Last year, competition in land shipping brought Turkey to loggerheads with Iran, which lies on Turkish export routes to the Caucasus, Russia and Central Asia. The tensions stemmed from high transit fees Iran charged from Turkish trucks, curbing their share in the regional transportation market. The dispute was eventually settled after several rounds of negotiations, raising hope that the two countries’ transportation and logistics companies will have a better ground for cooperation in the new period.

On the political front, Ankara and Tehran remain divided on many issues including Syria, Iraq, Yemen and NATO’s missile shield system, in which Turkey is playing a part. A key factor in regional disagreements is Ankara’s Sunni-based foreign policy, which puts it in opposite camps with Shiite Iran. Such political rifts could have a negative impact, even if partially, on bilateral economic ties as Iran moves to integrate with the global economy.

The two neighbors are bound by extensive links in the energy realm. Iran has for years supplied natural gas to Turkey, and a project is being floated for a new pipeline to carry Iranian gas to Europe via Turkey. Yet, another political risk stems from investigations into multibillion graft and bribery in the secret “oil for gold” deal that Ankara and Tehran implemented to circumvent the embargo. New findings in the probes could also have a bearing on political ties.