While Turkey's tourist industry is affected by Russian and European tourists no longer traveling to its shores in the large numbers seen previously, Iranian tourists party the night away in border towns such as Van. 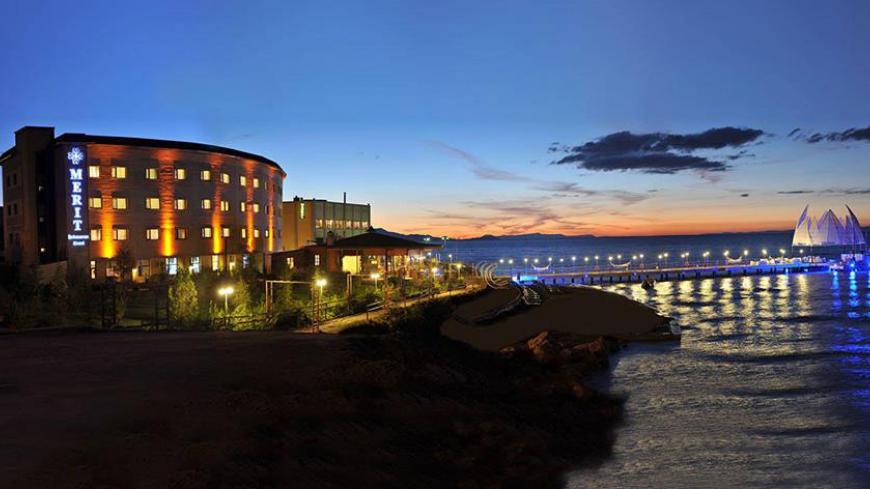 The Sahmaran Hotel is a popular destination for Iranian tourists. Posted March 19, 2012. - Facebook/VanSanatSokak

Many travel overland to the mainly Kurdish city of Van, an ancient settlement on the Iranian border, as they did this year for the March 21 arrival of spring and the Nowruz holiday that is celebrated by Persians, Kurds and Turkic peoples throughout the region. “They are coming in waves” crowed Hurriyet in an article about the latest Persian invasion of Van.

Demand is so overwhelming that all the hotels in the city of 1 million are fully booked; some have converted meeting rooms into bedrooms to accommodate demand.

Ipek Togrul, the manager of the Sahmaran Hotel that lies on the shores of Lake Van, a glittering body of water dotted with tiny islets and Armenian churches, told Hurriyet, “We are stupefied. Eight people are willing to stay in rooms that are meant for four.”

Al-Monitor spoke to a reservations assistant at the Buyuk Urartu Hotel, which is among Van’s oldest hotels, who claimed he was too busy to speak. “I am dealing with a new party of Iranian tourists, sorry,” he said before hanging up.

A video illustrating the Hurriyet story shows Iranian temptresses in slinky minidresses writhing on the dance floor to the beat of Persian pop music as their male companions struggle to keep up. Mena Muderrrezih, an Iranian tour guide told Hurriyet, “Van is very close to Iran. Nightlife is unrestricted here and Iranians feel relaxed.”

The Iranians also love to shop, and better still they pay in cash.

The Touristic Hotels & Investors Association (TUROB) said it expects 2 million Iranians to visit Turkey in 2017, which is up from the 1.6 million Iranians who came last year. This could make Iranian holidaymakers Turkey’s top customers provided there is no political tension between the two regional rivals, TUROB stated.

That is welcome news for Turkey’s troubled multibillion-dollar tourist industry that is still reeling from a string of bloody terror attacks, and the political instability that has engulfed Turkey since the failed July 15 putsch. Islamic State (IS) militants began targeting tourists in earnest in Turkey last year, including an attack on Istanbul's Ataturk Airport that left 42 people dead.

The value of Turkish Airlines (THY), the country's national flag carrier, dropped by 7.1% following news that Istanbul was among locations covered by recently introduced restrictions barring laptops and other travel devices in carry-on luggage. They were slapped on by the United States and Great Britain for flights originating in several Middle Eastern and North African states. Turkey has formally demanded to be excluded from the ban. THY relies heavily on passengers, including thousands of Iranians, transiting through Istanbul to get to destinations across the United States.

Last year was one of the worst years for Turkish tourism with a 30% drop in visitors. Russian tourists were among those who stayed away after Turkey downed a Russian air force jet over the Syrian border in November 2015. The Russians were following orders from their president, who seemed bent on punishing Turkey until President Recep Tayyip Erdogan apologized last summer.

This year hasn’t augured well either, with an Uzbek gunman said to be acting on behalf of IS storming an Istanbul nightclub on New Year’s Eve killing 39 people, most of them tourists from the Middle East.

Erdogan’s endless rants against the West have not helped, and Turkey’s brutal suppression of Kurdish insurgents has prompted calls for a boycott among Germans, who used to be Turkey’s No. 1 clients. Dutch tour operator GO Explore said it was striking THY off its list of recommended carriers after Erdogan described the Dutch as “Nazi remnants” among other unpleasant names. This followed the Dutch authorities’ refusal to let Turkish politicians campaign among Turks in the Netherlands ahead of an April 16 referendum to amass unprecedented power in the president’s hands.

Critics warn that if approved the substitution of Turkey’s current parliamentary system with a presidential one would result in one-man rule. In one of the most comprehensive analyses to date on the effects of the proposed changes, which was released by the Center for American Progress March 22, veteran Turkey expert Alan Makovsky said that under the new system, Erdogan could theoretically rule until 2034.

For as long as Iran’s own authoritarian system remains unchanged, Iranian tourists will most likely continue to flock to Turkey — unless Erdogan uses his new powers to ape his neighbors’ religious Islamic orthodoxy, such as slapping bans on booze.