Turkey's weak currency means more tourists can afford to travel there, but it doesn’t mean more revenue for the country. 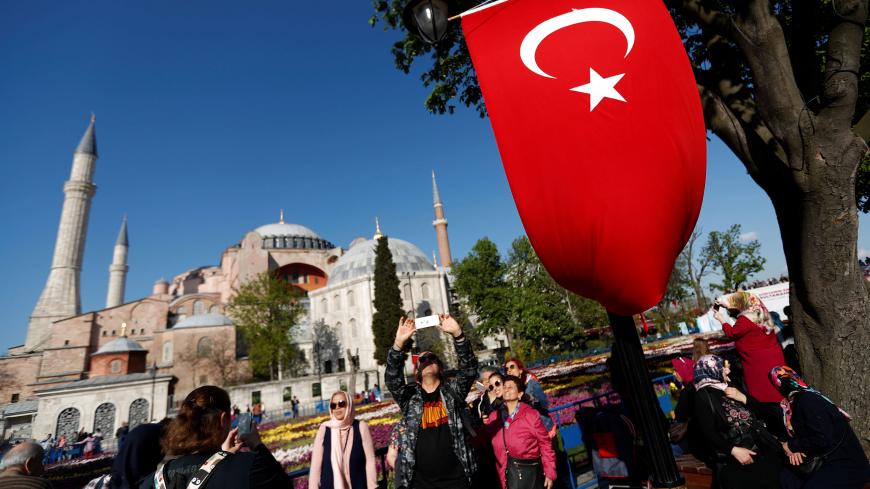 People take pictures at Sultanahmet Square, with the Byzantine-era monument of the Hagia Sophia in the background, in Istanbul, April 21, 2018. - REUTERS/Murad Sezer

In 2004, when the price of a small bottle of water was a million Turkish liras, the country decided to remove six zeros from Turkish currency. When the decision was implemented Jan. 3, 2005, a dollar equaled 1.34 liras.

The idea was to boost the value of the Turkish currency and improve its image. The lira gained some with the dollar's global drop in value, and in 2008 a dollar was selling for 1.14 liras. That year, Turkey hosted almost 31 million tourists, who spent an average of $820 each, for a total of $25.4 billion.

But the value of Turkey's currency again began sliding, and in 2009, $1 equaled 1.54 liras. Though the number of tourists rose to 32 million, overall tourism revenue declined to $25.1 billion, as the average tourist spent $783.

The crisis with Russia that erupted with Turkey’s downing of a Russian warplane in November 2015 severely affected Turkish tourism as Russia imposed an embargo on tourism to Turkey. Moreover, parity rose to $1 for 3.02 liras. That rise above the psychological barrier of 3 liras per dollar demoralized the tourism sector, which lowered prices even further in response to the Russian embargo, resulting in a decline of per capita spending to $705 in 2016.

In 2017, the Turkish currency suffered another sharp decline, falling to 3.65 liras to the dollar, and per capita tourism spending declined to $681, the lowest level in 16 years. Though the number of tourists reached 38.6 billion, revenue rose only slightly over 2008's figure to $26.3 billion. The US dollar, which meteorically rose to 4.9 liras at one point this year, was selling for 4.54 liras June 11 and 4.71 June 18.

Turkey’s tourism operators can’t cope with the situation of high-dollar parity and low revenue. Bahattin Yucel, a former tourism minister and former president of Travel Agencies Union of Turkey (TURSAB), warned that new bankruptcies could be in the offing for the end of this year.

“Turkey is becoming cheaper for foreigners earning foreign currency," he said. But if things continue the way they are, "we should anticipate some very serious failures at the end of the season. Airlines and some major resorts used serious foreign currency credits. They are all under severe pressure now. It is very difficult for these companies to do business in Turkey with this parity level and the tax system,” he said.

Ankara this year is counting on Russians to save Turkey's tourism. In 2016, because of the crisis over the downing of the Russian jet, only 866,000 Russian tourists came. When the crisis ended in 2017, that number shot up by 444% to 4.72 million. Russia now leads the list of countries sending tourists to Turkey, with a 14.55% share. Germany, which had led that list, is now in second place, with an 11.1% share, or 3.58 million tourists.

This year, Turkey expects 6 million tourists from Russia; however, while that number of tourists looks impressive, the revenue they are generating is not. Timur Bayindir, president of the Hoteliers Union of Turkey, said Russian tourists who were spending $800 each in 2013 spent $606 each in 2017.

“Before, our main market was Europe. It is now Russia. Deterioration in the Russian economy affects the spending of their tourists. The Russian ruble has lost serious value, with Russians making less and spending less. Our hoteliers, to utilize their capacity as much as possible and provide required services, are selling at very low rates. Because the customer profile has shifted to people who earn less, we are offering sale prices in tourism. Our prices today are even lower than before 2014,” he told Al-Monitor.

As the currency loses value, shopping and especially the service sector become cheaper for foreigners. During the past 10 years, the Turkish lira has lost 335%. We have thus painfully learned that just removing zeros doesn’t boost the value of the national currency — nor its image.