The ramifications of the euro’s slide threaten to further stoke Turkey’s currency woes and soaring inflation. 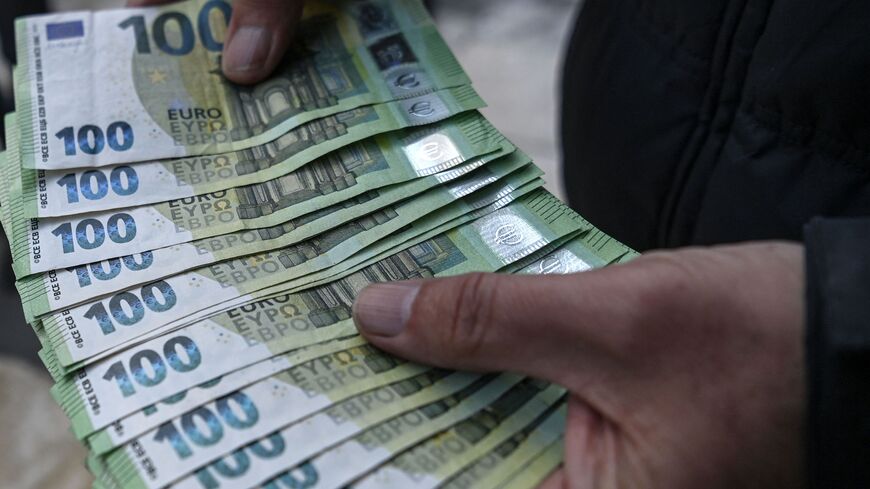 A currency exchange vendor shows a sheaf of euro currency notes at Tahtakale in Istanbul, on March 22, 2021. - OZAN KOSE/AFP via Getty Images

The euro’s slide to parity with the dollar is producing fresh strains for Turkey’s foreign trade, tourism and external debt liabilities, threatening to further fan the country’s galloping inflation.

The Turkish economy, which had long benefited from a euro stronger than the dollar, is in vulnerable shape now that the tide is turning. Its fragilities owe mainly to the dramatic slump of the Turkish lira amid Ankara’s controversial economic policies, marked by obstinacy in keeping interest rates low despite a dizzying surge in inflation.

The rise of the dollar versus the euro means extra strains for countries like Turkey whose foreign currency earnings are mostly in euros but have most of their foreign currency spending and liabilities in dollars. To shield their currencies against the strengthening appeal of the dollar, some countries have raised interest rates, but Turkey has effectively removed that instrument from its toolbox, risking heavy blows from the euro’s downturn.

The dollar has been buoyed by the US Federal Reserve raising interest rates and tightening monetary policy in the face of inflation soaring under the global impact of Russia’s invasion of Ukraine and the COVID-19 pandemic. Consumer inflation has hit a higher-than-expected 9.1% in the United States and an average of 9.6% in the Organization for Economic Cooperation and Development. In the 19-member eurozone, it has surged to an annual of 8.6% and is expected to rise further, with European countries taking some of the heaviest blows from the war in Ukraine, including risks to crucial energy supplies.

The European Central Bank, however, has lagged behind others in hiking rates, contributing to the weakening of the euro against the dollar’s growing appeal to global investors. The bank is under pressure to balance the interests of 19 countries that differ in economic strength, which makes quick and firm action more difficult. The tardier the bank, the more the euro is expected to slide versus the dollar.

For Turkey, the euro’s slip to parity with the greenback and the prospect of it dropping even further is bad news in terms of foreign trade in the first place. While Turkish exports invoiced in euros and dollars are almost equal — 45% and 48%, respectively — the country pays in euros for only 28% of its imports and in dollars for 71%. Other currencies represent the remaining share in Turkey’s foreign trade, and they too have lost ground against the dollar. To preserve euro-paying markets, Turkish exporters might be forced into dumping, adding to what some economists call the “immiserizing” impact of cheap exports.

Moreover, the Turkish economy remains heavily reliant on imported inputs, chief among them energy, and the dollar dominates import payments. Turkey’s energy bill has significantly swollen this year due to the global price increases and the depreciation of the lira, with net imports reaching $34 billion in the first five months of the year. To better understand the severity of the net energy bill, it’s worth recalling that Turkey’s current account deficit stood at $28 billion in the same period.

Turkey’s tourism industry, a key hard-currency earner, also stands to suffer from the euro’s fall. Tourism revenues are expected to reach $25 billion to $30 billion this year. Though the number of Middle Eastern tourists has notably increased in recent years — about 70% of the sector’s revenues are in euros — with German tourists the top source in this category. For Turkey’s tourism companies, the slide of the euro means that their turnover from euro-denominated deals would be worth less than expected in liras. To make up, they would need to attract more tourists by cutting prices, similarly to exporters.

The euro’s slide bears also on Turkey’s $451.2 billion external debt stock, including $132.1 billion in short-term liabilities and $319.1 billion in long-term debt, according to official figures for the first quarter of the year. Some 44.3% of the short-term debt is in dollars, while 25.9% is in euros. Dollar liabilities represent an even bigger share in the long-term debt. Overall, 58% of Turkey’s external debt stock is denominated in dollars and 30% in euros.

At home, the euro’s downturn reinforces the dollar’s status as a safe haven against the lira’s depreciation and inflation. Those who relied on the euro to preserve the value of their savings have been increasingly turning to the dollar. Retail depositors hold $149 billion worth of foreign currency in Turkish banks as of July, according to figures by the country’s banking watchdog. Central Bank data indicate that 40% of that sum is in euros. A bulky part of under-the-mattress savings is also believed to be in euros, given the large number of Turkish migrant workers in Europe and the remittances they send home.

The shift from the euro to the dollar has added to extant currency pressures in Turkey, with the lira tumbling by 4.5% to some 17.5 versus the greenback since the beginning of July.

In sum, the euro’s weakening has placed an extra burden on Turkey’s already fragile economy, contributing to pushing up the price of the dollar. For Turkey’s import-reliant producers, a more expensive greenback translates to higher costs, which will inevitably reflect on consumer prices down the road. The annual increase in producer prices has already hit a staggering 138% in Turkey, with consumer inflation standing at a 24-year high of nearly 79%.