Hamas and Hezbollah leaders have recently held meetings in Beirut, suggesting an end to their cold dispute over the Syrian war, as the Gulf-Qatari crisis continues. 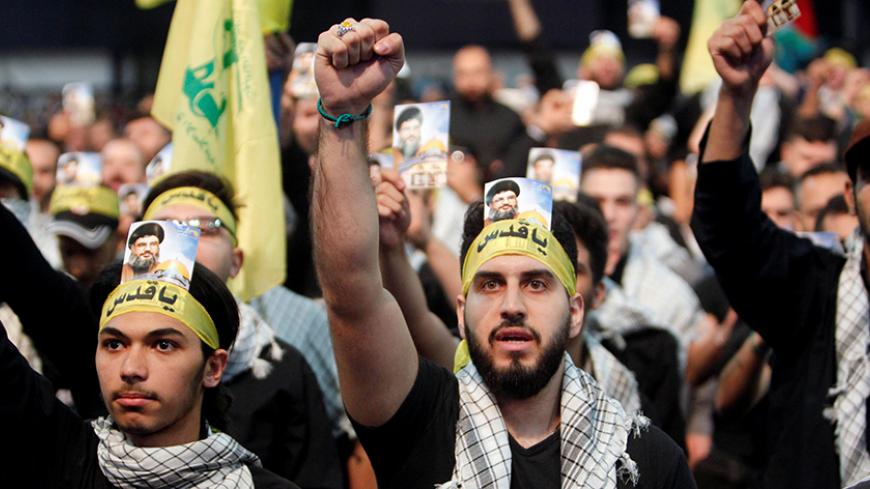 After a five-year estrangement over their dispute on the Syrian crisis, Hamas and Hezbollah have held meetings in Beirut over the past few months to discuss the region's latest developments.

Their most recent meeting June 14 — attended by Mousa Abu Marzouk, the deputy head of Hamas’ political bureau, and Hassan Nasrallah, the secretary-general of Hezbollah — has important implications, as it ends the lukewarm relations between the two sides since 2012. The meeting comes after Gulf countries imposed a blockade on Qatar, followed by talks about Hamas officials leaving Qatar, all of which impacts the Palestinian cause as a whole.

Al-Monitor contacted a number of officials from Hamas and Hezbollah to gain insight on the nature of their recent discussions, but they refused to publicly speak about their meetings, as they wish to achieve this bilateral rapprochement away from the media spotlight. However, they did confirm that serious steps are being taken to bring Hamas and Hezbollah closer together, without giving further details.

An Arab diplomat who had a hand in this rapprochement told Al-Monitor on condition of anonymity, “Since the beginning of 2017, Hamas and Hezbollah held three meetings in Beirut — in January, March and June — under the chairmanship of Abu Marzouk and some members of the movement's political bureau with Nasrallah and the Hezbollah leadership. The most important incentive for their meetings was Donald Trump becoming president of the United States and classifying both Hamas and Hezbollah as terrorist organizations.”

The diplomat said in a phone call from Beirut that “Hamas and Hezbollah discussed supporting a political solution in Syria and talked about how the Gulf crisis contributed to bringing the two parties together since anti-Qatar parties consider Hamas and Hezbollah to be terrorists. The two parties are also concerned about Israel waging war against them, in the event of which they expressed their intention to unite their military fronts and not give Israel the chance to target either of them.”

It is no secret that Hamas, despite having different positions regarding the Syrian crisis, needs Hezbollah when it comes to funding, training, securing supply lines for weapons and providing residence for Hamas cadres in Lebanon. For its part, Hezbollah needs a Palestinian movement, such as Hamas, to restore its popularity among Arab public opinion, which it lost after being involved in the wars in Syria, Iraq and Yemen against Sunni Muslims. Hamas, as a Sunni Islamic movement getting closer to the Shiite Hezbollah, may help dispel Hezbollah’s sectarian image. The new rapprochement between Hamas and Hezbollah may contribute to the return of armament and training cooperation programs, with the support of Iran.

Hamas spokesman in Gaza, Hazem Qassem, told Al-Monitor, “Hamas' rapprochement with Hezbollah comes in light of the movement's action at all levels to mobilize support for the Palestinian cause. Hamas is approaching certain parties that have had close ties with Palestine and support the resistance, without paying much attention to the alignments occurring in the region.”

At the height of the recent Gulf crisis, axes that existed before the outbreak of the Arab revolutions in 2011 started forming again, namely the axis of moderation composed of Egypt, Jordan, Saudi Arabia and the Palestinian Authority (PA), and the axis of resistance formed by Iran, Syria, Hezbollah and Hamas.

However, the current Gulf crisis seems to have revived the two axes, and Hamas, regardless of the costly political price it may have to pay, might return to the axis of resistance, which sympathizes with Qatar in its battle against the Saudi blockade.

Hussam al-Dajani, a political science professor at Al-Ummah University in the Gaza Strip, told Al-Monitor, “It is clear that the Gulf crisis helped bring Hamas and Hezbollah closer together, although the rapprochement was initiated before the crisis even began. However, now, the Hamas cadres who left Qatar — such as Saleh al-Arouri, a member of Hamas’ political bureau, and Moussa Doudine, the head of the prisoners’ dossier, among others — might be able to relocate to Lebanon. In addition, Hamas prefers to have its cadres stationed in Lebanon, under Hezbollah’s sponsorship, since it is closer to Palestine [geographically] and is home to hundreds of thousands of Palestinian refugees.”

Dajani said, “After leaving Syria in 2012 and reducing its presence in Qatar in 2017, Hamas has come to the conclusion that it needs to be significantly present in several Arab capitals.”

On June 15, Lebanon Debate reported that roughly a hundred Hamas leaders and activists arrived from Doha to Beirut without specifying their date of arrival. Hamas neither confirmed nor denied this, but the news coincided with talks in Qatar about Hamas reducing its presence there following Gulf pressure.

Hamas may be well aware that the closer it gets to Hezbollah, the farther away it moves from the Gulf states, especially Saudi Arabia and the United Arab Emirates. It might not have much space to maneuver and it would have no choice but to mend its relationship with Hezbollah to survive — both financially and militarily — as Egypt, the PA and Israel continue to tighten the noose around it.

Ahmed Yousef, a former political adviser to the head of Hamas’ political bureau Ismail Haniyeh, told Al-Monitor, “Hamas needs Hezbollah at all levels, despite the official Arab hostility toward [Hezbollah]. We share with it an extended alliance, despite the differences over the Syrian crisis. However, the movement has made sure to never close the door. Hezbollah has recently showed signs of its willingness to answer Hamas’ needs, in terms of the military and security experience among other things. Hamas and Hezbollah are in the same boat.”

Hamas realizes that the margin of political maneuvering has been narrowed by the polarization of the two rival axes: Qatar and its allies against Saudi Arabia and its partners. However, in the absence of other options, the movement seems compelled to resort to Iran and its allies in the region, namely Hezbollah, to survive. Even if it is faced with a new wave of criticism, Hamas would still be turning toward Hezbollah.