The Palestinian Authority is exerting more pressure on Hamas with its latest move cutting off the allowances of former prisoners affiliated with the Gaza group. 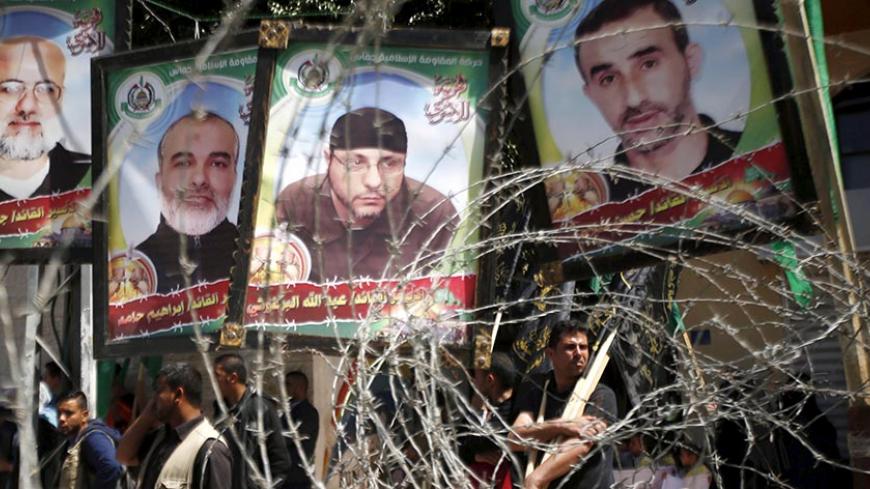 RAMALLAH, West Bank — Iman Bani Jameh, the wife of former prisoner Jihad Bani Jameh, from the village of Aqraba near the northern West Bank city of Nablus, was shocked to find out that the Palestinian government had cut off her husband’s salary starting June 1.

At the beginning of every month, the government pays the salaries of its employees and those of prisoners. Bani Jameh told Al-Monitor that this month she was unable to withdraw money because the government did not transfer her husband’s salary to his bank account.

Jihad spent 21 years in Israeli jails and was released in a prisoner exchange deal with Hamas in 2011 before the Israeli army arrested him again in a massive arrest campaign after the kidnapping of three settlers in Hebron in 2014. Jihad was then released six months later because of his deteriorating health condition due to Parkinson's disease.

Cutting off Jihad’s salary, which amounts to 7,000 Israeli shekels ($1,970) per month, has made things harder for his wife who uses the money to pay for his treatment and support their two children as well as her husband’s family. “My husband cannot move, let alone work. His monthly treatment costs 2,000 shekels [$565]. Our two children need a daily allowance and we only had my husband’s salary to support us before it was cut off without prior notice,” Bani Jameh said, noting that Jihad’s condition would deteriorate if he is unable to continue his treatment.

According to Hamas leader Abdel Rahman Shedid, himself a former prisoner who was exiled to the Gaza Strip and currently serves as the head of the prisoners’ media bureau in Gaza, Jihad is one of the 277 prisoners released in the 2011 prisoner exchange deal and affiliated with Hamas, whose salaries were cut off by the Palestinian Authority (PA) without specifying why. Although this decision was not officially announced by the PA, it was implemented in early June.

He told Al-Monitor that the decision will negatively affect former prisoners because many of them have no alternative sources of livelihood, especially those exiled abroad, while others are sick and depend on the salary in order to secure the cost of treatment, describing the decision as “unpatriotic and immoral.”

Shedid, whose salary has also been cut off, said he was informed by PA officials, which he refused to name, that the salaries of the 277 former Hamas prisoners released as part of the 2011 swap deal were cut off.

It is noteworthy that the decision to cut off the salaries of the 277 former Hamas prisoners is not related to the Israeli and US pressure on the PA to stop paying the allowances of current Palestinian prisoners in Israeli jails and their families. The decision to stop paying the 277 former prisoners falls within the context of the Palestinian division (Fatah-Hamas) and comes as part of the PA’s pressure on Hamas to cede power in Gaza to the consensus government.

Issa Qaraqe, the chairman of the Palestinian Committee for Prisoners’ Affairs (formerly the Ministry of Prisoners), told Al-Monitor, “The PA is still paying the stipends of the families of prisoners and martyrs and will continue to do so. This issue is considered a red line.”

As for the salaries of the 277 former prisoners that were cut off, Qaraqe said, “This decision was taken by the PA amid the ongoing dispute with Hamas. The decision is part of the [PA’s] pressure on the movement and has nothing to do with the United States and Israel calling on the PA to stop paying the Palestinian prisoners [currently in Israeli jails].”

Head of the Palestinian Prisoners Club Qadura Fares said on Quds TV June 11 that the government’s decision to cut off the salaries of the 277 former Hamas prisoners is related to internal decisions the PA is taking against Hamas to pressure it and achieve reconciliation.

The recent decision to stop paying the former Hamas prisoners comes as part of a series of steps the PA is taking to pressure the movement into ceding control of the Gaza Strip to the consensus government. In early April, the PA had cut off the salaries of Gaza’s government employees by 30-50%.

Meanwhile, the PA has yet to comment or explain the decision it took. However, government spokesman Yusuf al-Mahmoud told Al-Monitor, “I'm not sure how accurate this is, and that's why I cannot comment on the issue because no official decision was issued. But the government would never take any action that does not serve the interests of the Palestinian citizens and prisoners.” He explained that the government’s general stance would always take into consideration the people’s best interest.

In addition to cutting off the salaries of former prisoners on June 1, the government cut off the salaries of nine members of the Fatah bloc in the Palestinian Legislative Council (PLC) who were dismissed from the movement for having “other allegiances,” in reference to dismissed Fatah leader Mohammed Dahlan.

PLC member Najat Abu Bakr, whose salary was cut off, told Al-Monitor that she received a letter from the bank informing her that her account, to which her monthly salary is usually transferred, had been frozen. She then found out that other PLC members also did not receive their salaries, including Jihad Tomaleh, Shami al-Shami, Alaa Yaghi, Naima Sheikh, Majid Abu Shamala, Ibrahim al-Masdar and Abdul Hamid al-Eila.

Abu Bakr said that there was no justification for cutting off the salaries, noting that this is a form of bullying and a violation of all laws and conventions that preserve the freedom and dignity of the human being. She noted, “This decision violates the law because the salary of PLC members is guaranteed by law. We are not employees to have an employer cut off our salaries. We are elected by the people, and the law ensures our right to receive our salaries.”

Law No. 10 for the Duties and Rights of PLC Members and Law No. 11 for the Remuneration of PLC Members of 2004 stipulate that a PLC member shall receive a monthly salary of $3,000.

Although the decision to cut the salaries of prisoners and PLC members was issued by the government, it would not have seen the light without the approval and ratification of President Mahmoud Abbas. This comes two months after the government decided to reduce 30-50% of the salaries of the PA’s employees in Gaza, which indicates that the decision could later on expand to include other categories as a result of pressure by Israel and the United States or the president’s political opponents.