Israel's prime minister has called for an end to payments to Palestinians held in Israeli prisoners and their families, but so far the Palestinian Authority has refused to comply. 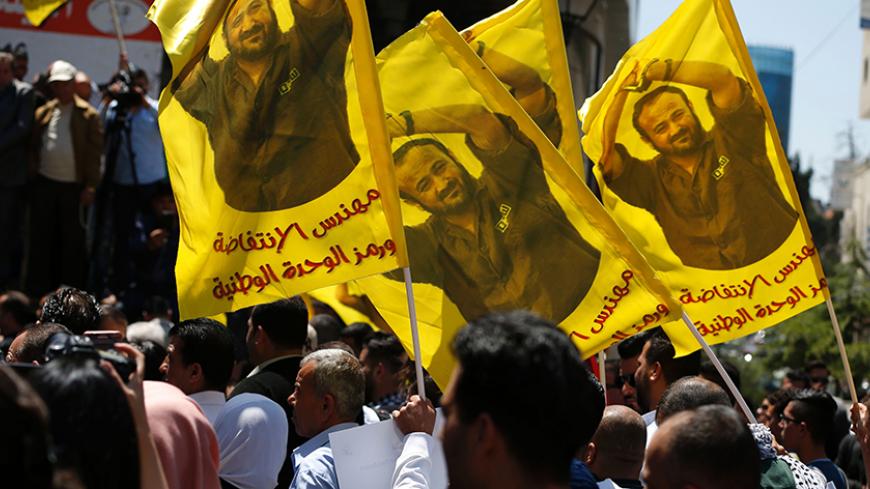 RAMALLAH, West Bank — In reaction to the open-ended and ongoing hunger strike by Palestinian prisoners in Israeli jails, started on April 17, Israeli Prime Minister Benjamin Netanyahu called on the Palestinian Authority on April 22 to to prove its commitment to the peace process by halting the financial allocations to Palestinian prisoners and their families.

Netanyahu's demands come in line with Israeli Defense Minister Avigdor Liberman's March 16 declaration that the Palestine Liberation Organization's Palestinian National Fund (PNF) is a “terrorist organization” over its “support for elements responsible for terrorist acts against Israel.” Liberman also condemned the disbursement of funds to Palestinian prisoners who killed Israelis. On March 16, the PA dismissed the declaration as a breach of the Oslo Accord signed between the PLO and Israel Sept. 13, 1993.

The PNF receives an annual budget of $250 million from the Palestinian government to conduct the tasks of the PLO's mission. The PNF is also responsible for paying allocations to the prisoners and their families as part of the PNF’s mission to “protect and care for prisoners and their families and support the rehabilitation of released prisoners,” which is included in the government's general budget.

Several PA officials confirmed to Al-Monitor that the PA would remain committed to paying these funds in defiance of Israel.

Issa Qaraqe, chairman of the Prisoners’ Affairs Committee (formerly the Ministry of Prisoners), told Al-Monitor, “Netanyahu's statements are completely dismissed by the PA.” He said, “President [Mahmoud] Abbas has stressed in several speeches and meetings that supporting the families of prisoners and martyrs is a national, humanitarian and social duty that shall always be fulfilled regardless of Israeli and international pressures.”

Qaraqe said that Netanyahu's statements are intended to pressure and politically extort the prisoners and the PA. He said that for the PA to end these payments would be tantamount to the criminalization of the Palestinian struggle against Israel, which is simply unacceptable.

Prisoners in Israeli prisons receive monthly PNF funding, which varies according to the detention period of each prisoner. Some of the money is directly transferred to prisoners so they can buy food and clothes inside the prison, while the rest is sent as social security payments to the prisoner’s family.

Palestinians are aware that Netanyahu's statements are primarily political and aim to draw the attention of US President Donald Trump and work against the PA before his meeting with Abbas at the White House May 3.

PLO Executive Committee member Wasel Abu Yousef told Al-Monitor, “Amid talks about a potential political process with US support, Israel is trying to tarnish the struggle of the Palestinian people with terrorism through Lieberman's PNF-related declaration and Netanyahu's call to cut off the [prisoners’] families.”

Abu Yousef said, “The payments for prisoners and martyrs must not to be messed with because these are people who are fighting for freedom and who have spent their lives in the occupation's prison cells.”

He added, “Netanyahu's statement is an attempt to reshuffle the deck and thwart efforts to launch a political process, adding this condition to the previous conditions that had been set for the resumption of the peace process. These include refusing to halt the settlement activity in the West Bank, insisting on Palestinian recognition of Israel as a Jewish state and refusing to release the fourth batch of prisoners.”

Parliament member Khalida Jarrar, head of the Prisoners’ Affairs Committee in the Palestinian Legislative Council, agreed, telling Al-Monitor that Israel's escalatory rhetoric toward the prisoners is an attempt by Netanyahu “to use this as an Israeli condition that must be applied before the resumption of the peace process. It is a means to challenge the Palestinian conditions that have been set for the launch of negotiations. These include putting a halt to the settlement activity and setting a timetable to end the occupation under international auspices. By so doing, Palestinians would be prompted to drop all their conditions in return for the [Israelis] dropping their terms and going to the negotiation table without any preconditions on either side.”

Jarrar ruled out the possibility that the PA will cut off the prisoners’ families, saying, “The issue is not only financial but also national, as those prisoners have fought for the freedom of their people, and cutting off their allocations would be tantamount to the Palestinian people’s disavowal and abandonment of prisoners and their families.”

For hundreds of families who lost their sole breadwinners, these allocations are the sole source of income.

Ismat Mansour, a former prisoner who spent more than 20 years in Israeli prisons and now runs the Hebrew Teaching Center in Ramallah, told Al-Monitor, “Before their detention, a large part of the prisoners were providing for their families. Therefore, it is the humanitarian, moral and national duty of both the PA and the Palestinian community to support them.”

Asked how the prisoners and their families would be affected if the PA agrees to Netanyahu’s demand, Mansour said, “The PA’s deference would be a major setback for the prisoners and all the Palestinian people because it would be a recognition of the Israeli narrative whereby we are terrorists.”

He added, “Responding to Netanyahu's request would prompt a strong reaction among the prisoners, their families and society as a whole and would be tantamount to delegitimizing the struggle of the Palestinian people.”