In an interview with Al-Monitor, Issa Qaraqe, former minister of prisoner affairs, discussed his dismissal and replacement as various Palestinian factions condemned the move by President Mahmoud Abbas given Qaraqe's widely respected efforts on behalf of prisoners. 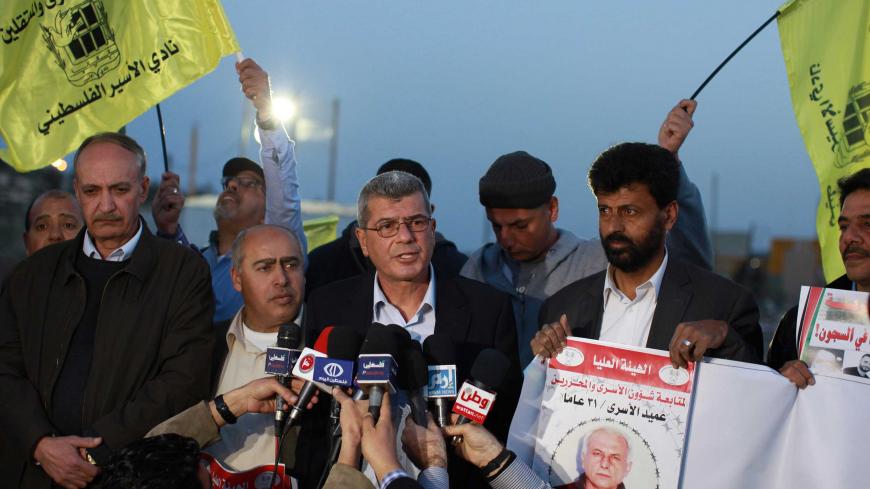 Political activists, families of prisoners and former prisoners have reacted angrily to the dismissal of Prisoner Affairs Minister Issa Qaraqe, who was replaced by fellow former prisoner Qadri Abu Bakr. In addition, the entire Prisoner’s Affairs Committee, which is headed by the minister, was also replaced. President Mahmoud Abbas ordered the changes in a presidential decree signed Aug. 2.

The reaction to Qaraqe's replacement ranged from assumptions that Abbas was pushing aside a minister he disliked to the change being a regular rotation at a ministry. The Prisoner’s Affairs Committee sets policies dealing with prisoners' issues and the concerns of their families.

Hamas and left-wing leaders issued strong statements criticizing Abbas' move and praising Qaraqe. They noted that Qaraqe had opposed payment cut-offs to Gaza prisoners and that he was a dedicated hard worker who always made himself accessible to prisoner families. Others simply felt the decision was long in coming and that such a change at the top of an important ministry was business as usual.

Jibril Rajoub, secretary of the Fatah movement, who served more than 15 years in Israeli jails, described the decision as routine. “If you look back at the previous years, ministers of prisoners have been replaced at regular intervals, about every four years,” Rajoub told Al-Monitor. “This decision will not affect prisoners or their families and will ensure that their needs are met by a strong, well-respected group of their peers.”

Qaraqe, who had been appointed to head the Prisoner’s Affairs Committee on Aug. 24, 2014, had previously not spoken to the media about his dismissal until opening up to Al-Monitor in an exclusive interview.

“I was not surprised by the decision,” Qaraqe said. “I had been expecting this for 18 months. It started when [imprisoned Fatah member] Marwan Barghouti called for a hunger strike in April 2017. After that, things started to happen that led me to believe that there was an attempt to push me out of my position.”

Abbas was not in favor of the hunger strike that Barghouti organized, but Qaraqe had supported it. Qaraqe, a member of the Palestinian Legislative Council, is also founder of the Palestinian Prisoner’s Club, a volunteer project aimed at drumming up public support for prisoners and advocating on their behalf.

“Since creating the Prisoners Club 10 years ago, I have dedicated my time to this sacred mission of supporting prisoners and their families,” Qaraqe told Al-Monitor. “I loved my job, and I was given a task, and I tried to do it to the best of my ability.”

Qaraqe, himself a former prisoner, was angered not so much by the decision to remove him but by the way he learned about it. He explained, “This is a highly political position, and I know these jobs are not forever. I did my best while given the privilege to serve, but I was upset at the way it was done. I should not have heard about this decision from the media.”

In a veiled reference to disagreements he had with the Palestinian leadership, Qaraqe wrote in Maan News on Aug. 1 that he was adamant about not apologizing to anyone, perhaps meaning the president and other top leaders.

“The only person I will apologize to is Fadi Abu Eita, a former prisoner who lost his memory as a result of a 41-day hunger strike he participated in in April 2017,” Qaraqe wrote. “He is the last released prisoner that I visited on Aug. 1,” the day news spread that he would lose his job.

Palestinian attorney Buthina Duqmaq, who regularly visits prisons and is close to prisoners from all the factions, told Al-Monitor that she was caught off guard by the strong negative reactions that some have had.

“I am surprised because this is a normal change,” Duqmaq remarked. “I know the new minister and his team, and they are top-notch people dedicated to the cause of prisoners. Change is good, and the new team will work together for the cause of prisoners rather than having one person do all the work.”

Duqmaq, who was recently elected deputy chair of the Arab Women’s Jurists Network, said that the new minister, Abu Bakr, had been one of the “guidance leaders,” the person among political prisoners who sets and translates movements' ideology in prison, when Rajoub headed Fatah’s prison committee.

A demonstration in solidarity with Qaraqe to protest his firing was held Aug. 3 in the Dheisheh refugee camp. While all those interviewed by Al-Monitor praised the new minister, many felt that Qaraqe had been punished because he had spoken out against some of Abbas’ policies toward Gaza. Along with Hamas and left-wing activists, a number of Fatah activists were also unhappy with the shuffle.

Mohammad Lahham, a member of Fatah’s Revolutionary Council, participated in a protest in Ramallah against the decision. He was quoted by journalist Hamdi Farraj as saying that Palestinians' strategy is often based on “those who don’t work interfering with those who work,” possibly a nod to Qaraqe's reputation for being dedicated to his job.

Yasim Izzedin, a political commentator, heaped praise on Qaraqe. “In all honesty, Qaraqe was the only respectful minister in the Palestinian leadership,” he told the Iranian news agency al-Alam on Aug. 3. “He defended the rights of all prisoners, including the rights of prisoners that belong to Hamas.”

Farraj, a left-wing columnist and former prisoner, observed about Qaraqe on the Wattan website Aug. 3, “This dynamic leader showed up during all the painful times and has often joined hunger strikes for a day or two. I call him the prisoner’s monk given his dedication to the cause of Palestinian prisoners.”