Arrests in Jordan for eating in public during the Ramadan fast have sparked debate over the country's constitution and legality to carry out the crackdown. 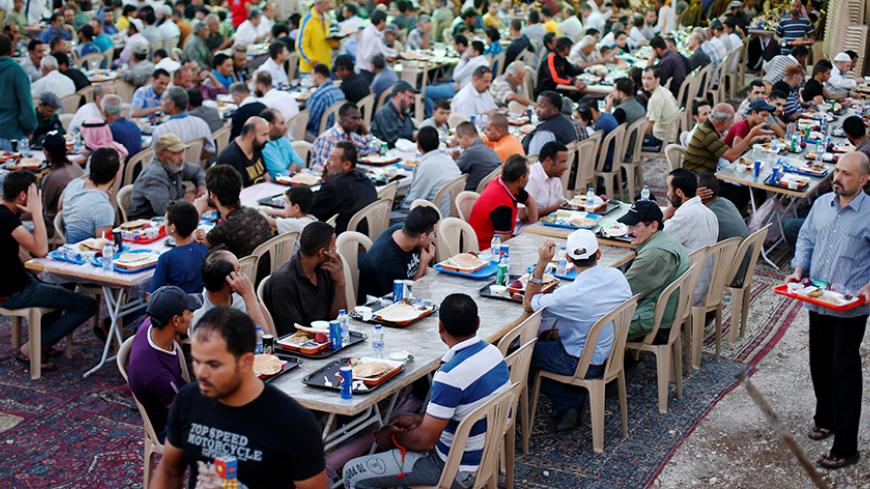 AMMAN, Jordan — The Jordanian security forces’ raid on a restaurant on June 2 in the town of Naour has sparked debate over whether Jordan is an Islamic state or a “civil state” based on the rule of law. The restaurant, Buzz, was raided for serving food to students from the German Jordanian University during the holy month of Ramadan.

Acting on the orders of Jamal al-Fayez, an administrative governor, the security forces arrested the owners of the establishment, located 12 miles south Amman, and kicked the students out, raising the issue of the freedom to eat in public during Ramadan.

Activists came to the restaurant's defense with the hashtag #Ghazwat_Naour (“Invasion of Naour”). It was not the first time that Jordanians have rallied behind the right to eat. In 2014, activists launched a Facebook campaign under the banner “Just like you are entitled to fast, respect my right to live a normal life,” and media figures took to Facebook that same year to start the Secular Movement in Jordan, to demand the “non-criminalization of people who eat in public in Ramadan.”

Some Twitter users accused the security forces of acting like the Islamic State, which punishes people in areas it controls if they are discovered eating in public during Ramadan. Liberal writer Basel Rafayeh sarcastically wrote on his Facebook page, “The Naour invasion will make the headlines in IS' Dabiq magazine. I offer my congratulations to the Jordanian government on this victorious and blessed invasion during the month of Ramadan. Its reward shall be multiplied.”

Article 274 of the Jordanian Penal Code stipulates that persons who publicly violate fasting during Ramadan shall be punished by imprisonment of up to a month or a fine of up to 25 dinars (around $35). The Ministry of Tourism and Antiquities, however, allows licensed tourist facilities to serve food and drinks during the month under certain conditions, chief among them after installing window curtains.

Lawyer Lyn al-Khayyat told Al-Monitor, “The law criminalizes the violation of Ramadan’s sanctity in general, not merely eating in public, given that eating in public can raise sensitivities in society in light of Article 274.”

The restrictions imposed on people who eat in public during Ramadan came after Amman Gov. Saad Shehab had threatened in a May 25 statement to the Hala Akhbar website to take administrative and legal measures and arrest anyone violating the sanctity of Ramadan. Shehab shut down four tourist establishments during the first 10 days of Ramadan, which this year began on May 26, for failure to comply with food-serving conditions. In a June 4 statement to the Ammon website, he said that the Naour restaurant had been closed because it did not have curtains and passers-by could see people eating inside.

Several similar cases have been reported in Jordan. Rafayeh said that on June 5, two Christian girls eating on a tourist bus traveling between Amman and Aqaba were reprimanded by a Muslim girl, who called the police and complained to the driver, who stopped at the next traffic point where there were police and forced the girls off the bus.

“The state is using religion to impose its authority on certain segments of the people,” one of the Hala Akhbar page administrators told Al-Monitor, speaking on the condition of anonymity. “The criminalization of people who eat in public during Ramadan is contrary to the most basic human rights that Jordan has ratified in international agreements as well as to the principle of citizenship. The state shall neither protect nor serve one segment at the expense of another.”

Article 2 of the Jordanian constitution stipulates, “Islam is the religion of the state.” For Muslims, fasting is the fourth pillar of Islam and therefore mandatory.

Hayel al-Daoud, the former minister of Awqaf, told Al-Monitor, “Calls to allow eating in public during Ramadan are improper, as they violate the state’s constitution, which stipulates that Islam is the religion of the state. We do not force citizens to fast, but to each society its traditions and laws, and everyone has to respect society’s customs.”

Despite Article 2's stipulation, Jordanian civil and criminal laws are not based on Sharia, except those relating to inheritance and personal status, such as marriage and divorce. In addition, on Oct. 16, 2016, King Abdullah issued his sixth discussion paper, in which he presented a road map for Jordan to fulfill the requirements of being a civil state, in which, the Jordan Times reported, “social justice, equality and the rule of law” prevail, and “religion is a key contributor to the value system and social norms,” while pluralism is protected.

Mohammed Shamma, a journalist who focuses on human rights affairs at Journalists for Human Rights, told Al-Monitor, “Criminalizing people who eat in public is a form of restricting freedom. It violates the conventions signed and approved by Jordan. Chief among these is the International Covenant on Civil and Political Rights, whose ninth article stipulates that ‘everyone has the right to liberty and security of person’ and ‘no one shall be subjected to arbitrary arrest or detention.’”

Shamma also said that such criminalization violates the Universal Declaration of Human Rights, in which Article 12 stipulates that ‘no one shall be subjected to arbitrary interference with his privacy, family, home or correspondence.' He asserted, “[Fasting is] a personal matter, not a public one. Consequently, the state should not invade citizens’ privacy. Everyone should have the freedom to practice their own beliefs and ideas.”

Shamma’s view of the problem in Jordan contrasts sharply with Daoud's. “Those who fast are imposing their will on the others, and the state is forcing everyone to abide by the [Muslims'] religion,” said Shamma.

Rafayeh, who writes for the Takwin section of the Amman Net website where liberal authors tackle religious and social issues, said, “The state’s utmost duty is to protect its citizens’ human rights regardless of any religious classification, be they Muslims or Christians, fasting or not. However, the state is conspiring with the public religious opinion against the rights of some of its citizens.”

He further asserted, “The state is using the pretext that Islam is the [state] religion in Jordan under the constitution, and this somehow justifies the pressure the political Islam currents put on the regime and the society. Jordan is a country that is not based on Sharia. Commercial banks and liquor stores operate normally in the country, and gender mixing is not forbidden, but people who eat in public during Ramadan can spend up to a month in prison. This is sheer political and religious hypocrisy.”

Jordanians were divided on social networking websites between supporters and opponents of the police raid on the restaurant, which sparked a debate over the identity of the Jordanian state and whether it is an Islamic or a civil state whose basis is “the rule of law."