Jordan does not recognize the Baha'i faith as a religion, which has created difficulties for adherents in regard to marriage, inheritance and overall civil rights. 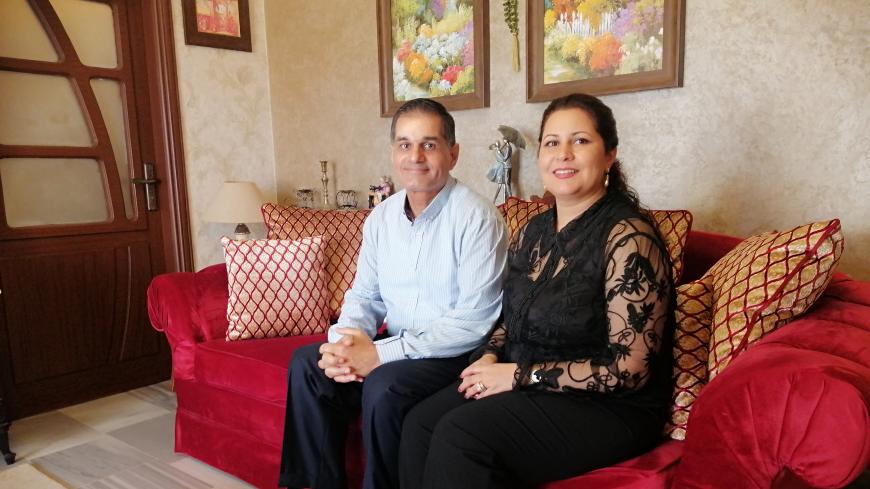 Niaz Ruhani, a senior member of the Baha'i community in Jordan, is pictured here with his wife, Wissam al-Masjoun, a lawyer, Irbid. - Mohammad Ersan

North of Amman in Irbid, Niaz Ruhani and his wife, Wissam al-Masjoun, pray at home, like all other Baha’is in Jordan. They have no temples or religious courts or education classes because Jordan does not officially recognize the Baha’i faith as a religion.

The Baha'is arrived in Jordan in the late 19th century from Iran, where the religion originated. A few families, mostly agricultural workers, settled in the Adassiya region, in the Jordan Valley. Their descendants currently number an estimated 1,000 in the kingdom, according to Ruhani, a senior member of the community.

The Baha'i faith is a monotheistic religion whose adherents recognize the Prophet Baha'u'llah and his message of unity of the human race. Like Muslims, the Baha’is say daily prayers, which they perform facing the city of Acre, in today's Israel, where their prophet was buried in 1892.

“The Baha'i faith … calls for love, brotherhood and peace. It is based on the fundamental belief that worship is expressed through work and by serving society,” Ruhani explained. “Daily prayers are performed individually because the relationship between the believer and his creator is an individual and emotional relationship. The Baha’is only perform group prayers in the event of death. We also fast, but this is for 19 days during our calendar year of 19 months.”

Jordan's Baha’i community, like most Baha’is in the Middle East, lament that they do not enjoy full civil rights because authorities refuse to officially recognize their religion. Jordan only recognizes Islam, Christianity and Judaism. As a result, Baha’is face difficulties registering marriages and divorces, settling inheritances, establishing places of worship and receiving religious education through schools.

In Jordan, all marriages must be performed according to a recognized religious tradition; there is no provision for civil marriage. After a couple's religious wedding, the state registers the marriage and provides a family book that includes the date of marriage.

“Since the Baha'i faith is not recognized as a religion, a Baha’i marriage is not fully registered by the Jordanian Civil Status and Passport Department,” said Wissam al-Masjoun, who is a lawyer. “The state gives us a family book, but it does not record the date of marriage.”

The absence of a wedding date makes it difficult to claim rights stemming from marriage or to register a foreign spouse who wants to obtain Jordanian nationality. Inheritance is also a problem. Because there is no Baha’i court, Baha’is are sent to Islamic courts to sort inheritance issues, but Baha’i tradition on inheritance is different from Islam. For example, under Islamic law, a daughter is entitled to only half the inheritance a son is guaranteed, but in the Baha’i faith, the will of the deceased determines who gets what. Given all this, Baha’is try to settle issues of inheritance among themselves, or they approach a civil court to sort out matters.

When Jordan adopted smart ID cards three years ago, it came as a great relief to Baha'is, Masjoun said, because there was no place for designating one's religion. Prior to 2016, there had been a box for religion on identity cards, but the Baha’is were unable to record their religion because they had no box. That part of the card was either left blank or had a black dot over it.

In addition to suffering from legal discrimination at the national level, the Baha'is must also deal with their rights being denied by local governments. Masjoun told Al-Monitor that in 2017, the governor of Amman, Saad al-Shehab, had banned a Baha’i event celebrating the bicentenary of Baha'u'llah's birth.

“At the time, the governor claimed that this was intended as a move to protect Baha'is from public outrage,” Masjoun said, charging that it was just an excuse, as there had been no tensions between Baha'is and other groups on the ground. “We co-exist with non-Baha’is. We invite them home to our fests, and we face no difficulties. We [have] friends from all religions.”

The Baha'i community in Jordan mostly pray at home, as they have no houses of worship (Photo by Mohammad Ersan)

Masjoun said that she has never felt the need to hide that she is Baha'i, a tiny minority in a country that is 97% Sunni Muslim. “I try to explain what the Baha’i faith is and our role in serving the community,” she told Al-Monitor.

Tahani Rawhi, a representative of the Baha'i community in Jordan, echoed Masjoun's words on tolerance and harmony, the bases of the faith.

“Baha'is practice their worship and rituals freely, but the coexistence we want is not limited to religious tolerance,” Rawhi told Al-Monitor. “We want to see all members of Jordanian society come together in a diverse but united mosaic. Tolerance is a shared community responsibility. Tolerance, acceptance and moderation should not be mere slogans, but long-term goals of the community. This is what some Baha'is seek to establish. We want to strengthen a culture of dialogue, leading to mutual understanding and respect, so that common citizenship and the values of humanity bring us together.”

Taghreed al-Dughmi, a lawyer and author of “Towards Full Citizenship in Jordan,” underlined that despite their desire for harmony, Baha’is face severe challenges in obtaining full rights in Jordan.

“Article 6 of the Jordanian Constitution states that Jordanians shall be equal before the law and that there should be no discrimination among them in regard to their rights and duties on the basis of race, language or religion,” she told Al-Monitor. “However, Baha'is face problems when it comes to the implementation of this article. Article 14 provides that the state shall safeguard the free exercise of all forms of worship and religious rites, but this article is limited only to the recognized religions in the kingdom.”

Dughmi said that not only the constitution but international accords that Jordan has signed oblige Amman to permit freedom of belief and the performance of religious rituals to all its nationals and residents. She cited in particular the International Covenant on Civil and Political Rights, the Universal Declaration of Human Rights and the International Convention on the Elimination of All Forms of Discrimination.

Despite this, a law that would recognize the Baha’i faith as a religion would be hard to pass through parliament, Kamel Abu Jaber, director of the Royal Institute for Interfaith Studies and a former foreign minister, told Al-Monitor.

“The problem is that even if the Jordanian state recognizes [the Baha'i faith], any draft law or amendment to that effect would be squarely rejected in parliament,” he said. “In the 1990s, when I was foreign minister, a group of Baha’is visited me requesting that their religion be recognized. I relayed the message to the prime minister, but the government was concerned about the reaction of the parliament and Jordanian society reaction.”