Are Iraqi Mandaeans better off in Jordan?

Because of discrimination, Iraq’s Mandaeans practice their religion in secrecy in Jordan. 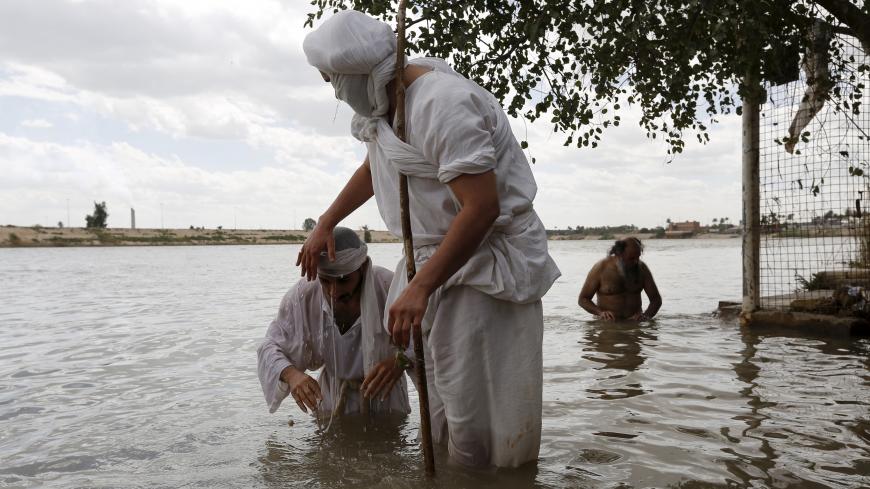 A Mandaean priest baptizes a worshipper in the Tigris river during the Benja festival, Baghdad, Iraq, March 16, 2016. - REUTERS/Ahmed Saad

AMMAN, Jordan — Bashir Nader, a 55-year-old Iraqi, lives with his family in al-Hashmi al-Shamali neighborhood in Jordan’s capital, Amman. Nader fled the city of Samarra in 2016 to escape the Islamic State (IS) and Shiite militias who targeted the Mandaean community.

Mandaeism is an independent religion, and its followers claim it is the oldest monotheistic religion. Its followers revere Adam, Adam's son Seth, Noah's son Shem, Abraham and John the Baptist, who is the last of their prophets.

Nader’s family immigrated to Jordan looking for asylum, as did 2,500 other Mandaeans. In Jordan, more than 95% of the population follows Sunni Islam; the next biggest religion is Christianity, which dropped from 12% of the population in 1956 to less than 4% in 2012 (the latest available statistics) due to immigration, according to Kamel Abu Jaber. the head of the Royal Institute for Inter-Faith Studies.

The suffering of Mandaeans began in 2014 when IS took over Samarra in southern Iraq, an area where adherents of this religion are concentrated. They were faced with two choices: death or converting to Islam as IS considered them infidels, Nader told Al-Monitor.

Nader added, “Amid terror, murders and the captivity of women, we fled through the dirt road from Maryam neighborhood in Samarra to al-Suwaira in Wasit province, which is controlled by Shiite militias and the Popular Mobilization Units, in search of safety.”

But the situation was not much better. The family of seven was threatened with murder and forced by Shiite militias to pay large sums of money to spare their lives. The militias killed many Mandaeans, most of whom worked in jewelry making, in al-Suwaira.

The family had little choice but to seek asylum outside Iraq, just like thousands of Mandaean families who escaped religious persecution and chose asylum in Jordan in 2016. They were officially registered at the UN High Commissioner for Refugees in Jordan in the hope of getting the chance to migrate to a third country.

Nader’s family does not get any medical or financial aid from the UNHCR, although agency spokesman Mohammad Hawari told Al-Monitor, “The UNHCR does not discriminate between refugees based on their religion or origins. The aid is distributed depending on the neediest of families.”

After evaluating his situation, the UNHCR concluded that other, less fortunate people deserved the aid more than Nader's family.

Nader and his family live in a modest house. Their economic situation is bad because he was wounded by shrapnel in the 1980-88 Iran-Iraq War; this has prevented him from working. Jordanian labor laws were also closing in on his children and on all Iraqi refugees in general. They were treated as migrant workers, unlike Syrian refugees who receive facilitated issuance of work permits.

The family relies on aid from its fellow Mandaeans, but the economic situation is not the only challenge. Karima, Nader's wife, said, “Mandaeans are forbidden from practicing their religious rituals comfortably, as Jordanian authorities prohibited them from doing so, especially when it comes to performing baptisms at river banks or water pools.”

Nader said, “When we came to Jordan, the sect leader baptized people in the running water in Wadi Shuaib [18 miles west of Amman]. But the Jordanian authorities forbade him from performing the religious rituals. Out of fear for our lives, we took our practices home and did what we could.”

Jordan only recognizes Islam and Christianity as religions in the kingdom. In 2014, the government changed the name of the non-Muslim sects’ law to the 2014 Council on Christian Denominations Law. The law did not mention any other religious minorities in the kingdom despite the presence of groups such as the Druze and Baha’is.

Taghreed al-Daghami, a lawyer who prepared the study “Freedom of Belief and Rights of Unrecognized Religious Minorities in Jordan” in 2012, said, “Chapter 2 of the Jordanian Constitution prohibits discrimination between Jordanians. As per the constitutional text: ‘Jordanians shall be equal before the law. There shall be no discrimination between them in regard to their rights and duties on grounds of race, language or religion.’”

Daghami told Al-Monitor that Article 14 of the Jordanian Constitution states, “The State shall safeguard the free exercise of all forms of worship and religious rites in accordance with the customs observed in the Kingdom, unless such is inconsistent with public order or morality.” But, she added, “This article is limited to the recognized religions in Jordan and does not guarantee the right to belief; only the right to practicing rituals.”

Daghami said the Jordanian Constitution does not include any article that explicitly talks about the freedom of belief. Only Muslims and Christians can talk about their religion and practice their rituals openly. Other religions, such as the Baha’i faith, cannot do the same. She said, “Jordan has to respect the rituals of other religions, even for non-Jordanians, because it ratified several international agreements and charters such as the International Covenant on Civil and Political Rights, the Universal Declaration of Human Rights and the International Convention on the Elimination of All Forms of Racial Discrimination. All these agreements guarantee the respect of the right to belief and to ritual practices.”

Although Jordan is committed to these international charters, Ram, a young Mandaean who preferred not to provide his full name, keeps his religious identity a secret in front of his neighbors and friends in al-Hashmi al-Shamali neighborhood in Jordan. He told Al-Monitor, “I introduce myself as an Iraqi Christian to avoid any embarrassing questions. Jordanians do not know anything about the Mandaean beliefs. I pray and celebrate religious occasions at home because I cannot do that in public.”

Mandaeans are afraid to go back to Iraq because of the power militias have gained there. Instead, the Mandaeans live in asylum, under tough economic conditions, hoping for better days when the UNHCR takes them to a Western country where they can practice their religion freely.