Members of Iraq's dwindling Mandaean community are facing many difficulties in practicing their religion as the government has failed to protect them. 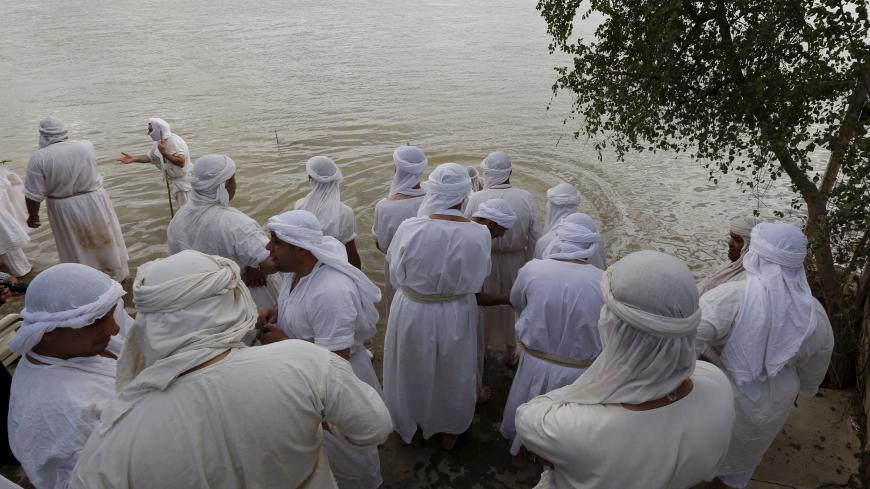 BAGHDAD — Mazen Nayef, the leader of Basra's Sabaean Mandaean community, told Al-Sumaria News on July 23 that Iraqi authorities recently denied the community's request to build a house of worship, despite legally owning the land where it would be built. The Mandaeans fear that this will lead to further marginalization of the community and its culture.

​As part of a campaign against the Mandaeans in Iraq, videos and rumors about the community's purported use of magic and sorcery have spread like wildfire. Consequently, the leader of the Sabaean Mandaean community in Iraq, Sheikh Satar Jabar Helou, said Aug. 16 that his community has nothing to do with witchcraft.

Mandaeism is the oldest unified religion known to humanity. It originated in Mesopotamia, specifically the city of Ur and the coastal areas near the Mesopotamian marshes. The Mandaean belief system, according to the Mandaean Associations Union, is monotheistic, with Adam being "the first Mandaean who received the religious instructions directly from God."

Before the US invasion in 2003, Iraq's Mandaean community was estimated at 70,000, but many emigrated due to rampant kidnappings and displacement. Today's population in Iraq is around 10,000, while many live in Iran.

In April 2017, Iraqi customs authorities at the Shalamjah border crossing prevented the entry of copies of a Mandaean religious text, “The Great Book, Ginza Rba,” which is the group's source of commandments and teachings.

“The members of the community cannot practice their rituals in public," said a Sabaean Mandaean from Diwaniya, on condition of anonymity. "They are forced to do so indoors and in private. At the same time, they find themselves compelled to engage in Muslim rituals, in order to avoid any misunderstandings.” Only a limited number of Mandaeans remain in Diwaniya in light of the ongoing emigration of their community.

“Some parties and religious groups have an agenda to displace minorities in order to turn Iraq into a purely Islamic state,” said author Nazar Yasser al-Haider, a Sabaean Mandaean residing in the United States.

Such actions against the community “make Mandaeans feel marginalized and persecuted based on their beliefs, as if they were second-class citizens in Iraq,” said Haider. “These actions are a violation of the Iraqi Constitution, which guarantees freedom of belief, protects religious minorities and allows them to practice their religion.”

Regarding Iraq's dwindling Mandaean population, Haider said, “The extremist environment is culturally and ideologically forcing minorities to emigrate, and there are armed groups that adopt the policy of minority displacement in order to seize their property.”

Riyad Bankani, a Mandaean and academic who emigrated to Canada, told Al-Monitor over the phone, “The most important challenge facing Mandaeans is the security chaos that some extremists exploit. [The extremists] threaten the Sabaeans to abandon their belief and their non-proselytizing, peaceful religion, which only preaches coexistence and never forces people to embrace it.”

Mandaeans do not proselytize. They also do not allow conversions and forbid Mandaeans from marrying outside their religion. These factors have further contributed to the decline in Mandaeans.

Bankani said the instability of Iraq's political system makes it "difficult to implement laws that protect minorities," including a 2012 law, known as Law No. 58, which protects one's right to worship freely.

Parliament established the Endowments of the Christian, Yazidi and Sabaean Mandaean Religions Diwan in 2003 to provide services to religious minorities.

The Sabaean Mandaeans are represented by one deputy in parliament and have one seat on the Baghdad provincial council.

Mandaean member of parliament Harith al-Harthy said Aug. 4, “Mandaeans are being harassed and pressured by certain figures to leave Iraq.”

Iraqi journalist Alaa al-Hamidi, who specializes in covering minority rights, told Al-Monitor, “Only dozens of Mandaeans remain in Iraqi provinces. … One of the daily dilemmas faced by members of religious minorities, especially Sabaeans, is the National Identity Card Law, which discriminates between Iraqis based on religion and belief.”

​Article 26 of the National Identity Card Law, according to Hamidi, "encourages the Islamization of [youth] minorities when a parent converts to Islam, which constitutes a threat to religious freedom.” He added that “not one school in all of Iraq is dedicated to the young generation of Mandaeans.”

​Selim Khamisi, 70, a Sabaean who works in the gold trade in Babil province, where only dozens of Mandaeans remain, told Al-Monitor, “The fear of security instability and the increasing sectarian strife in Iraq has made us practice our religious rituals, such as prayer, fasting and baptism, in relatively isolated places and out of sight.”

Khamisi said the community’s demands to obtain land to establish a Mandaean cemetery were "completely ignored" by local authorities.

Mandaeans have settled in over 20 countries around the world, with an estimated global population of 150,000

Prior to activating laws and addressing the Mandaean community’s material needs in Iraq, it is necessary to promote a culture of respect and tolerance for different beliefs and to combat religious discrimination.