The Iraqi Council for Interfaith Dialogue has sought to unite people around protection of minorities. 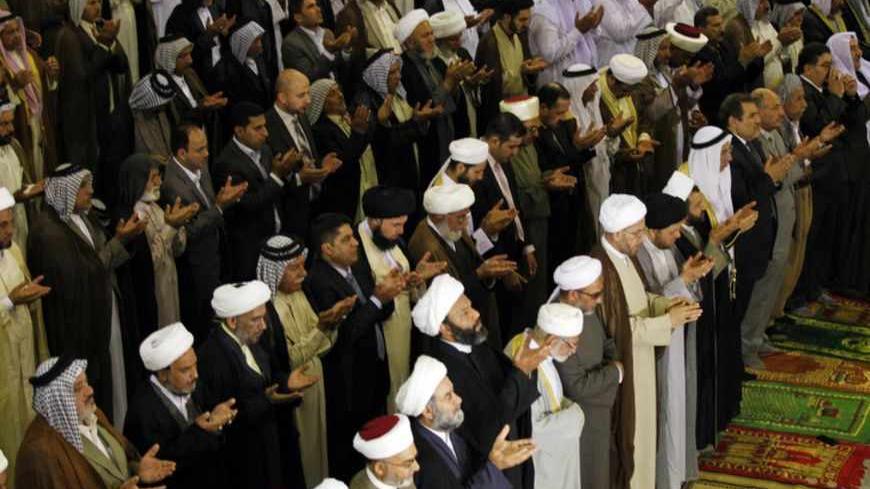 Iraqi Muslim worshippers pray during a joint Sunni-Shiite Friday prayer at the Martyrs Monument in Baghdad, May 24, 2013. - REUTERS/Thaier al-Sudani

The situation of religious and ethnic minorities in Iraq today is the worst in the history of the country. Some of them have almost disappeared, through annihilation and emigration, and the populations of others have decreased significantly, especially after the occupation of Iraq, as a result of sectarian war and security crises. The establishment of the Iraqi Council for Interfaith Dialogue on March 14 is considered an important step forward in the effort to protect Iraq's surviving minorities.

The history and current status of Iraqi minorities

Iraq has long been known for its ethnic and religious diversity, a mosaic rarely seen elsewhere. Iraq managed to preserve much of its ancient heritage until the beginning of the last century. The Mandaeans and their rare ancient culture have a place in Iraq's history, as do the Jews, who have maintained their Hebrew heritage for some 2,600 years. The same is true of the Chaldeans and the Assyrians, two groups brought together by Christianity after millennia of conflict and fighting. There are also the Armenians and a number of other Christian denominations. The Yazidis practice the only remaining form of the ancient dualistic religion mixing Islamic Sufism and Kurdish heritage. The religion of the Babis and Baha'is originated and developed in Iraq and later spread from there to the rest of the world. Furthermore, there are a number of Shiite sects, among them the Shaykhis and the Akhbaris, and a significant number of Sunni Sufi schools, including the Qadiriyya, Naqshbandi and Kasnazans. The magazine Masarat spent eight years publishing articles about these groups, covering the issues and challenges they face under the authority of the majority.

These groups only faced the threat of extinction relatively recently, when nationalist and religious ideologies spread via the domino of revolutions in the middle of the 20th century. When the concept of a unilateral Iraqi identity, based on Arab nationalism and Islam, arose, these groups became threatened minorities. They were separated from Iraq's core identity, making it easier to isolate them and implement forced relocations. This was the result of Iraqi society and the political authorities' failure to establish a true and broad Iraqi nation. Ali Taher discusses this idea in Iraqi: From Identity Shock to the Awaking of Identities (2012).

The process of marginalizing minorities began with the Jews in 1941, during the Farhud pogrom, fueled in part by common political interests among internal and external parties and overwhelming ignorance among the public. Angry groups carried out acts of violence and looting against Iraqi Jews, leaving hundreds dead, thousands wounded and homes and other property destroyed. The Jews began to emigrate, and in 1950 those who had left were stripped of their Iraqi citizenship, and their money was confiscated.

The academic Haider Saeed, at a talk in the Iraqi parliament in February 2011, expressed his belief that this stage was a turning point in the process of controlling Iraqi identity. It was followed by a chain of deportations and forced relocations of other groups. Saeed stressed that correcting the path when it comes to dealing with religious and ethnic minorities in Iraq will not happen until Iraqis acknowledge the error of Operation Farhud, there is expression of remorse among the public about Iraq's Jews and their rights are returned to them.

The process of marginalizing non-central identities also affected Iraq's Baha'is, beginning with a group of official decisions issued between 1974 and 1975. They first involved the confiscation of their property and a prohibition on the practice of their religion, eventually leading to punishment by death. This pushed the Baha'is to isolate themselves from the broader society or to emigrate, according to a number of studies, including one published in Minorities in Iraq: Memory, Identity and Challenges (2013), which has a chapter about them. At the same time in the 1970s, mass deportations of Iraqis of Iranian origin occurred in waves, along with the confiscation of their property, as part of a "second Farhud."

Events after the fall of Saddam Hussein were also not in the best interest of Iraqi minorities, as sectarian tensions were unleashed. Minorities were targeted as the state "cleansed" areas with mixed populations. A number of terrorist attacks were directed at minorities, most notably at the Church of Our Lady of Salvation in 2010, in which more than 50 people were killed. There were also repeated attacks on homes and shops owned by Mandaeans, whose population strikingly declined, following on the near-total disappearance of Jews and Baha'is in recent decades. Yet, despite all this, Saad Salloum, director of the Masarat Institute, believes that there is still a glimmer of hope. In an interview with Al-Monitor on May 22, Salloum pointed out that Iraq is still home to a small number of Jews, estimated at about 100, according to statistics gathered by his institute. Furthermore, Baha'is still have a presence, although under the radar, along with Christians, Mandaeans, and other religious groups. Intensified efforts must be made to protect these minorities and keep them part of the Iraqi mosaic.

Establishment of the Iraqi Council for Interfaith Dialogue

In light of the aforementioned challenges, a variety of efforts have been made to maintain national and religious diversity in Iraq and to defend minorities against the challenges they face. The Masarat Institute has been part of this project, conducting research and raising awareness. It has produced documentary films, notably Minority at Risk, and published studies, the most recent and notable being Minorities in Iraq (in Arabic and English). It is a comprehensive guide on the status of religious minorities from the beginning of the 20th century until 2012. The Iraqi branch of the Imam al-Khoei Foundation has held seminars and actively participated in international conferences to highlight the threat of annihilation faced by the country's minorities, who in the past were considered full-fledged Iraqi citizens, according Jawad al-Khoei, the secretary-general of the foundation.

These efforts have led to joint activities between personalities and institutions affiliated with various religious groups. They include the Atyaf journal, which focuses on Iraqi identity and is published under the joint editorship of Muslim and Christian academics. The Atyaf Foundation organized a number of meetings that brought together religious and academic institutions concerned with minorities. A conference held in Najaf in 2011 was attended by a number of senior Christian leaders, as well as Muslim figures and Iraqi academics specializing in minority issues. Among those in attendance were Archbishop Jean Benjamin Sleiman, head of the Latin Rite in Iraq and chairman of the Interfaith Dialogue Committee in the Iraqi Council of Bishops; Father Amir Jaji, regional representative of the president of the Order of the Dominican Fathers in the Arab world and their head in Baghdad; and the heads of the Anglican and Armenian churches in Baghdad.

The Imam al-Khoei Foundation hosted the Najaf event, and the Masarat Institute actively participated in it. Follow-up meetings were also held. This series of gatherings concluded with the announcement by the al-Khoei Foundation, Dominican Fathers and Masarat Foundation of the establishment of the Iraqi Council for Interfaith Dialogue on March 14. The Mandaeans community has joined the council, which is currently in the process of expanding contacts to bring all Iraqi religious groups under its umbrella.

Those who follow religious relations and conflicts in Iraq consider the new council to be different from its predecessors. It has gone beyond issuing nice, but vague statements and has inserted itself into the heart of the problems between religious groups. It has adopted the principles of international human rights and absolute equality for all religions and sects, as well as for atheists and non-recognized religions. Khoshaba Hanna al-Sheikh, editor of Atyaf, told Al-Monitor on May 25 that this stance makes the council potentially capable of achieving its goals, especially given that it includes figures with wide-ranging social influence.