What Iraq needs to do to protect minorities

The alliance of Iraq’s minorities is a step to prevent Iraq from being totally stripped of its minorities. 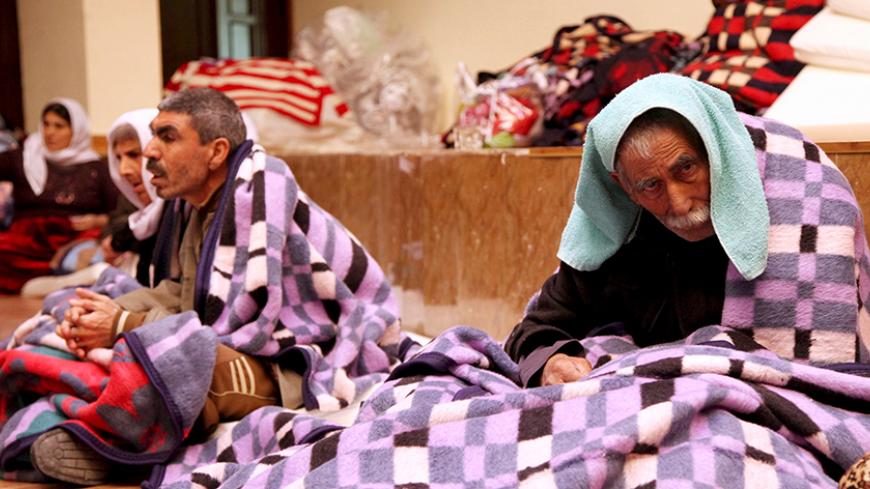 People from the minority Yazidi sect take refuge in a building in Shikhan, Jan. 19, 2015. The conflict with the Islamic State has resulted in the killing and displacement of Iraqi minorities, including thousands of Christians, Shabaks and Turkmens. - REUTERS/Ari Jalal

Iraq is losing many of its minorities, and it’s on the brink of losing most of its cultural diversity. Despite this tragic situation, minorities are denied adequate protection and support by the Iraqi government, while the international community is failing to take any serious measures to protect them. They have been abandoned to their own fate in a country expelling its population.

In the early 1900s, the Jewish community in Iraq was one of the largest minorities in the Middle East. According to a statistical study (to which the author contributed) conducted in 2011 by Masarat, an organization that focuses on minorities in Iraq, six Jews remain in Iraq.

The study added that there are nearly 240,000 Christians out of more than 1 million who were present during Iraq’s invasion in 2003, and nearly 5,000 Mandaeans, who numbered 50,000 in 2003. The number of Yazidis dropped from almost half a million in 2003 to a small undeclared number (there are no official statistics on the current number of Yazidis), following the massacre they were subjected to by the Islamic State (IS) in 2014.

There is no substantial difference between the situation of the minorities mentioned above and the rest of Iraq’s minorities. They have faced and still face similar threats from militias, gangs and even individuals, and they lack any adequate international and government protection.

Under such circumstances, minorities have three choices. First, leave the country for an unknown destination; however, migration options have become extremely difficult and limited following the massive influx of refugees to Western countries.

Second, stay in the country and remain subject to the various threats from terrorist groups and criminal gangs, without any protection.

Third, join one of Iraq’s larger components in order to be provided with collective protection.

All of these calls could lead to the extinction of the minorities in the country, and this could happen in the foreseeable future if their current situation remains unchanged. There have been no official statistics about minorities in Iraq for the last three decades. This issue is not reflected in official statements, but rather in policies and measures taken by the government and other parties in Iraq.

Minorities, along with a number of civil society organizations such as Masarat, the Hammurabi Human Rights Organization and the Iraqi Council for Interfaith Dialogue (ICID), are fighting against the difficult challenges facing them. They are doing so by establishing strong social organizations designed to strengthen the minorities’ voice, further raise public awareness of their tragic situation and bring their voices to the decision-makers in the country.

The minorities recently created alliances among themselves to stand against the similar problems that they share in various fields, such as the lack of support and protection by the government.

The ICID brings together the main minorities — Christians, Mandaeans and Yazidis. Established in 2013, it is expanding to include all of Iraq’s minorities. The ICID has helped activate the Alliance of Iraqi Minorities (AIM), which was established in 2010, without being seriously activated prior to the recent launching.

In a conference of the various institutions focusing on minorities, including ICID, AIM was re-established on Nov. 27-28 in the city of Erbil. AIM appointed a new board of directors and developed a plan and a strategy — whose details have yet to be revealed — to counter the various challenges facing Iraq’s various minorities.

AIM also includes a representative of all the institutions that participated in the conference. Some of these institutions represent a particular minority and others work on the protection of minorities in general in the context of human rights protection.

Moreover, AIM is seeking to expand cooperation with civil society organizations and human rights centers in Iraq in order to raise public awareness within Iraqi society of the situation of minorities and the major negative consequences of stripping the country of its minorities.

Sayed Jawad al-Khoei, a prominent cleric in Najaf who has contributed to the establishment of ICID and is a member of AIM, told Al-Monitor that the response to the problem of minorities in Iraq requires a collective will and a comprehensive program, because it is not a simple and one-dimensional problem.

He added that a collective and intensive work on several axes is necessary, including “to amend discriminatory legislations that are inherited from the previous rules, to work on developing new legislation to protect minorities and to make large-scale modifications in the educational curriculum in order to celebrate and stimulate respect for diversity in the community.” This is added to temporary and urgent measures to protect displaced minorities in order for them to be able to live in their own country, rather than rushing to emigrate, Khoei noted.

The major alliances between minorities and institutions will undoubtedly help them better achieve their goals. Yet the problem of minorities is linked to the situation in Iraq.

As long as the three major components — Shiites, Sunnis and Kurds — have not agreed on a peaceful coexistence with each other, the situation will not be safe for minorities. Minorities are often the collateral victims in any conflict in the country.

The most prominent example is what happened to minorities in June 2014, after IS took control over the Ninevah Plains, where different minorities existed. Minorities have become easy prey for IS — which targets minorities as it does not tolerate non-Muslims — in the ongoing major conflicts between IS, the Iraqi government and Iraqi Kurdistan.