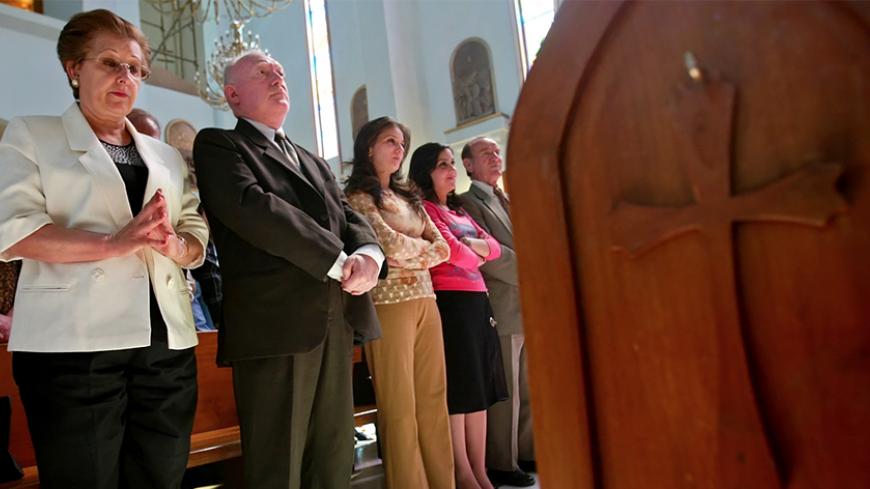 Amid all the suffering they are already subject to, the minorities in Iraq now have to deal with a National Identity Card Law that systematizes infringement on their rights. This law, which parliament passed in late October, came after the numbers of Iraqi minorities dwindled, following the massacres and organized attacks that have caused the displacement of the vast majority of them.

According to statistical projections, Iraq will be a minorities-free country in the near future, which brings to mind the displacement of the Jewish minority in Iraq in the 1950s and 1960s. The Iraqi legislator was supposed to take this fact into account, as it undermines Iraq’s political system and promulgates a law that promotes the presence of minorities in Iraq and protects them from the dominance and political encroachment by the majority (Muslims).

However, the opposite happened.

Indeed, the National Identity Card Law originally was supposed to facilitate administrative formalities for Iraqi citizens, as it confers to these citizens one identity instead of several identities to complete the required formalities with governmental institutions. However, this law tackles details that are not related to the main objective and has turned into a form of discrimination against non-Muslim minorities.

Article 26 of this law includes two provisions that set the foundation for a systematic discrimination against minorities, which may end their presence in the country:

These provisions mean that only non-Muslims can convert their religion to Islam according to the law, while Muslims cannot convert their religion. Moreover, a child born within a marriage between a Muslim and non-Muslim shall take on the Muslim religion, regardless of the gender of the Muslim parent. This means that if one of the parents converts to Islam the child will automatically become a Muslim.

This law sparked the resentment and objection of all religious minorities whose members of parliament suspended their attendance to parliamentary voting sessions as a sign of protest. Christian MP Yonadam Kanna stated in a press conference held on the day of the vote on the law in parliament, in the presence of other minority representatives, “Article 26 is unfair and inconsistent with the principles of the constitution and violates its articles. Article 26 deprives human beings of their will to choose their own faith, religion and conviction. It is contrary to the Islamic principle that there is no compulsion in religion.”

In the same vein, Patriarch of the Chaldean Catholic Church Louis Raphael I Sako expressed in a statement issued on Oct. 31 that he regrets the article was approved. He said, ”We submitted a request to amend the law a few months ago to the Iraqi parliament based on our pursuit of justice and equality, but the decision was unfair to non-Muslim minorities.” He added, "This is an unfortunate departure from the principle of pluralism and respect for diversity and privacy.”

Indeed, religious minorities, civil society organizations and democratic groups staged several demonstrations and protest rallies against this law in various regions of Iraq, such as in Erbil on Nov. 5.

In this respect, Masarat Foundation, which specializes in minority affairs, held a conference on Nov. 4 at the Mandaeans (an ancient indigenous minority in Iraq) headquarters in Baghdad, which was attended by representatives of various Iraqi religious minorities to denounce Article 26.

Masarat Foundation Chairman Saad Salloum told Al-Monitor, “Minorities feel that there is systematic and integrated discrimination policy against them and that the Iraqi legislator is complementing the mission of the Islamic State (IS) in imposing the Islamic religion on minorities and causing them to flee the country in the near future.”

Saib Khidir, the representative of the Yazidis in the Iraqi Council for Interfaith Dialogue, specified that the new law is reproduced from a law passed under Saddam Hussein. He told Al-Monitor, ”What is happening is a continuation of the policy of discrimination against minorities that started under the Baathist regime. The new National Identity Card Law reproduced the text of the Civil Status Law No. 65 of 1972 [Article 21/III], which specifies that a minor is registered as Muslim following a conversion of any of the parents to Islam."

Those who opposed Saddam's regime, and who are now in power, because he did not give them their religious rights are reproducing discriminatory laws today. Khidir describes the new law as a clear violation of human rights and several articles of the Iraqi Constitution, including Article 2 that specifies that the constitution guarantees the Islamic identity of the majority of the Iraqi people and guarantees the full religious rights to freedom of religious belief and practice of all individuals such as Christians, Yazidis and Mandean Sabeans, and Article 42 that states that each individual shall have the freedom of thought, conscience and belief.

Numerous civil rights activists believe the Iraqi legislator did the opposite of what is expected from him under the circumstances, since the law must be based on the implementation of positive discrimination in favor of minorities in cases where there is a possibility of marginalization and discrimination, or the threat of extinction. This means that in such cases, minorities should be provided with further protection and assistance, to preserve their presence in the country.

The current situation on the ground in Iraq is as follows:

The controversial article is not deemed a religious necessity, however, which means that its removal will not lead to the violation of Islamic teachings. Moreover, it is possible for the national identity card not to include a religion field, which is the most appropriate solution for the worsening sectarian situation in Iraq. There are also other legal options such as suspending the religion of children of mixed-religion families until they reach adulthood, when they can choose their religion.

The situation of minorities in Iraq has reached the most dangerous level in history, which is worsened by this law. One may say that minorities are taking their last breath in a country that does not provide them with any protection and fundamental rights and freedoms. One may also wonder whether the Iraqi government, at all levels, is aware of the seriousness of the situation faced by these minorities, and of the dangerous social and humanitarian consequences of the demise of their physical and cultural presence in Iraq.