Although the Iraqi constitution stipulates rights for all the country’s "components," there is a pressing need for a law that specifies and ensures minority rights in particular. 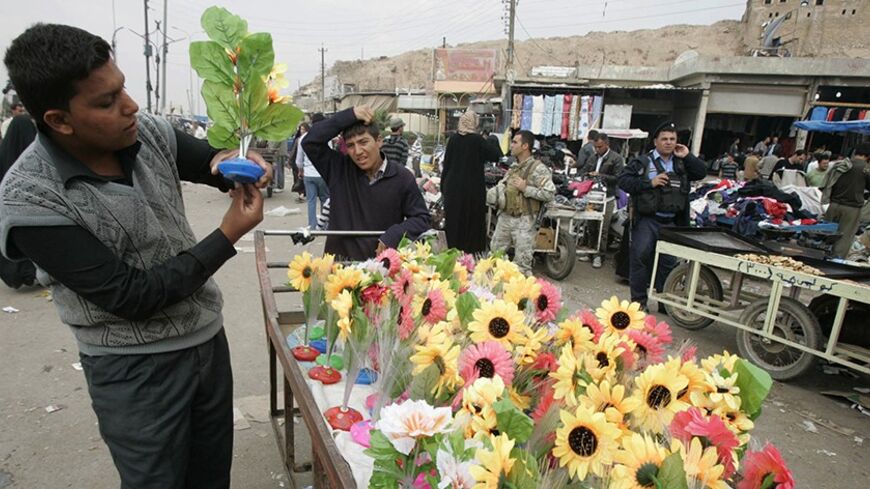 A boy sells plastic flowers at a market in central Kirkuk, home to a volatile mix of Kurds, Arabs and Turkmen, Nov. 5, 2011.

Supporters of a law on minority rights in Iraq are working to finalize a draft with the hope that the next parliament will act on it, following legislative elections scheduled for April 30. Given the narrow demographic space religious and ethnic minorities occupy, they are subject to marginalization and subsequently ignored within their societies. This is particularly true within societies, such as Iraq's, composed of large groups involved in sectarian conflict. The rights of minorities often are lost amid the clamor of the larger groups’ demands.

Iraqi society is tribal in nature and shaped by sectarian divisions. Some tribes are divided on the basis of sect, as is the case of the Shammar, Tayy, Banu Tamim, al-Jabbour, Zubaid, Khafaja and Khazraj. Since the first Iraqi military coup in 1958, the ruling regimes, aided by events, worked to strengthen this structure to use it politically to consolidate power. The current authorities are also trying to use this structure in the ongoing sectarian conflict by forming alliances with Shiite parties against other Shiite groups in Shiite areas and with Sunni groups against their rivals in Sunni areas.

The tribal and sectarian structures offer needed protection for those within them in their conflicts with rival groups. In addition, the large Iraqi groups — the Shiites, Sunnis and Kurds — take part in governance and have significant shares in the general political regime and economic system. This gives them the ability to preserve their interests and promote their sectarian and national agendas. In addition, they have a chance to be socially prominent and to culturally express themselves in the public arena.

Minorities, however, have less protection because they are outside the tribal structures — as is the case for Baha’is, Christians and Turkmen — or are too small as a group to be effective on their own behalf. Their political presence amounts to only a small number of MPs representing them. Also, their religious and cultural freedoms are sometimes limited to the confines of their homes and houses of worship, without the freedom of public expression.

In such a situation, it is important for government to preserve the rights of minorities and provide them with protection by passing legislation ensuring their participation in public life. This falls under the category of “positive discrimination,” an approach followed in countries where minorities are harmed or disadvantaged in some way due to certain conditions. It aims to preserve minorities' rights and compensate them for past harmful discrimination and exclusion. The modern and democratic state can counter negative, discriminatory practices by offering governmental guarantees of taking action against crimes committed against minorities in addition to the adoption of measures to hinder persecution.

A number of international laws and pacts approved by a majority of countries, including Iraq, include provision aimed at helping protect minorities. These include the United Nations Charter of 1945 and the Universal Declaration of Human Rights of 1948, in addition to conventions on women, workers and other groups. They all include articles touching on the status of minorities to make sure their rights are preserved and that they are granted equal opportunities in public life. In 1992, the United Nations issued the Declaration on the Rights of Persons Belonging to National or Ethnic, Religious and Linguistic Minorities, which includes articles on minorities from earlier international pacts, with additional details and guarantees.

The Iraqi constitution does not mention minorities but uses instead the word components, which differs from international agreements, which refer specifically to minorities. The drafters of the Iraqi constitution set out the freedoms and rights of religious and ethnic groups within the scope of confirming the existence of the prevailing identity of the country. This amounts to marginalization of these smaller groups. Article 2, section 1, of the constitution states, “This constitution guarantees the Islamic identity of the majority of the Iraqi people and guarantees the full religious rights to freedom of religious belief and practice of all individuals, such as Christians, Yazidis and Mandean Sabeans.”

Golo Sinjari, a member of the Iraqi independent High Commission for Human Rights,” told Al-Monitor that laws discriminating against minorities enacted under the former regime are still applicable. He added that in addition to overturning these laws, there is a need to enact new laws to protect minorities, but no one seems to care. Examples of discriminatory laws include Law 105 of 1970 banning the Baha’i faith, and Article 21/3 for the Personal Status of Minorities, Law 65 of 1972, which imposes Islam on children if one of their parents converts to it.

Sinjari added that the situation for minorities deteriorates daily because they do not enjoy adequate legal protection. As a consequence, the number of those emigrating abroad has increased. According to Sinjari, the number of people committing suicide is higher among minority groups compared to other groups.

The Masarat Institute for Cultural and Media Development (MCMD), which works to protect minorities in Iraq, helped prepare the first draft of the Law of Minorities as part of a project aimed at “legalizing the fight against all forms of discrimination,” and in case that did not work, adopting “a special law that protects the rights and freedoms of minorities.” Masarat published the draft law as part of its 2013 study “Creative Diversity: Roadmap to Enhance Pluralism in Iraq,” which was discussed at a conference on Jan. 20 in Baghdad.

The draft law focuses on ensuring the rights of minorities by identifying and preserving their cultural and religious identity by protecting their language and cultural education and supporting minority appearances in the media to express their social identity. Moreover, the draft states the importance of revising the educational curricula in history and religion to encourage the promotion of pluralism and acceptance of others. It is equally essential to shield the curricula from ideological dominance by conflicting religious and national identities and to treat these two subjects with objectivity and impartiality.

Saad Salloum, head of the Masarat Institute, told Al-Monitor, “It took two years to develop this study through discussions with the UN [Assistance Mission for Iraq] and the representatives of minorities. The draft law for minorities was distributed at the conference in order to put it up for public discussion by experts, media and civil society so that they can develop it before presenting it to the next parliamentary session.”

Passage of the minorities law could help mitigate emigration by minorities and halt their leaving central and southern Iraq for northern regions of the country.