A new Iraqi institute aims to change the country's discourse toward minorities through educational curricula designed by religious minorities. 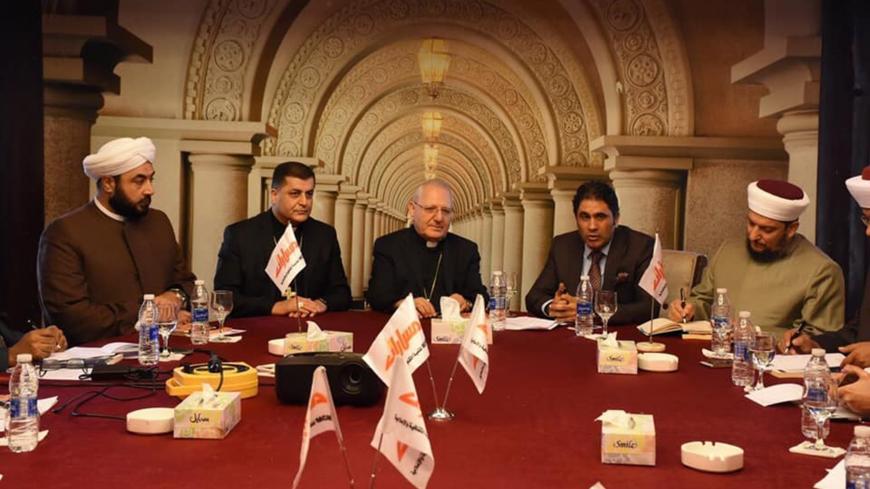 Leaders from different faiths meet to launch the Institute for the Study of Religious Diversity, Baghdad, Iraq. Posted July 3, 2019. - Facebook/MCMD

On a hot summer day in Baghdad, a group of academics, civil activists, clergymen and leaders of Iraq's various religious groups gathered to launch the Institute for the Study of Religious Diversity, the first of its kind in the Middle East.

The Baghdad-based Masarat, a nonprofit organization focusing on minorities, collective memory studies and interfaith dialogue, launched the new institute, in cooperation with a host of universities and civil rights groups, on July 2. Masarat has published many books on Iraq's minorities and has won international prizes for its promotion of civil rights.

Religious minorities' representatives described the institute's launch as a "historic step." The institute will be a pioneer in the region, teaching the tenets of various minority faiths, including Mandaeanism, Yazidism, Baha'ism and Christianity, to Muslims.

"It was my pleasure that the institute's first constituent conference [is] held in Baghdad, the city of religions, diversity and peaceful coexistence," said Sheikh Amer al-Nimrawi, a Sunni clergyman and the president of the Assembly of Iraq's Moderate Scholars. "This meeting represents the mosaic of Iraq's ethnic and religious groups. May God help us all and take our hands for the good of all mankind."

The institute will bring the leaders of various religions together and also cooperate with academia and religious leaders to develop and teach curricula to Muslim clergymen, to help them adjust their sermons and the wider Islamic discourse regarding diversity in Iraq. The ultimate aim is to combat radicalism and hate speech against minorities.

"By teaching Christianity and other religions to Muslims, the institute will contribute to the confrontation of sectarianism and ignorance of the other," said Cardinal Louis Raphael I Sako, the head of the Chaldean Catholic Church. "This experience deserves support, as it includes authoring the religious curricula by its adherents and teaching it by them as well." The cardinal wrote the institute's Christian curriculum.

For Hasso Hormi, head of the Yazidi Foundation in the Netherlands, the institute represents an opportunity to teach Muslim clergymen about Yazidism and to combat the widespread misunderstandings that led to massacres at the hands of the Islamic State (IS) in 2014.

"It is the first time in our history to have the opportunity to teach the Yazidi religion to others, specifically to Muslim clergymen, according to a curriculum prepared by the Yazidis themselves," Hormi said. "What is happening in this hall is a historic moment for us. For decades we have suffered from stereotyping and prejudices promoted by the media, intellectuals and irrational government policies."

He continued, "We faced a lot of discrimination because of such negative stereotypes. Throughout the history of our presence in Iraq, we were the victims of 74 genocide campaigns, the last of which was the crimes of IS."

Hormi believes society needs to change, and such change can start in schools and places of worship.

"We, as Yazidis, bet on the work of this institute through its founders' sincere will, steadfastness and rational policy to achieve the change," he said. "A few years later, we might see a new generation that is completely different and will be the nucleus for a rich, diverse and powerful society capable of meeting [societal] challenges."

Khalil Jundi, an international expert on Yazidi affairs and Iraq's charges d'affaires in the Philippines, authored the Yazidi curriculum.

"I developed a curriculum on the Yazidi religion that took me 30 years to write based on the Yazidi oral tradition," Jundi said. "Teaching this to Muslim clerics will liberate the minds of new generations."

Iraq's minorities have faced harsh times amid a lack of security, increased violence, terrorist attacks and radical speech. Since the US-led invasion of Iraq in 2003, the Christian community has dwindled by 83%, from around 1.5 million to just 250,000. In 2014, IS displaced 125,000 Christians from their historical homelands in the Ninevah Plains and Mosul. Other forms of violence forced the Mandaeans to flee Baghdad and southern Iraqi governorates, leaving around 10,000 Mandaeans in the religion's birthplace.

With nearly 7,000 Yazidi women enslaved and brutalized by IS fighters, women's rights are also a part of the institute's interests.

Nadia Fadhel Maghamiss, director of Divan for Endowment of Mandaeans in Iraq and the institute's gender officer, said, "The institute is the result of years of work among women, clergymen and experts, who made interfaith dialogue a field for discussing gender equality and to provide an opportunity to promote the status of women from the perspective of the prevailing religions." She said the institute will produce studies and curricula to promote this endeavor, since women are the most marginalized group in the various religious traditions and were the first victims in the Yazidi genocide.

Iraqi law has also marginalized the Baha'is, who were not recognized as a religious minority in the 2005 constitution. The post-2003 government did nothing to eliminate Law No. 105 of 1970, which prohibited all Baha'i activities in Iraq. The institute wants to highlight the situation of the Baha'is, whose followers cannot alter their civil status to receive identity cards showing their Baha'i faith.

Jews, who once formed one-third of Baghdad's population, are all but nonexistent in the city. The institute seeks to empower unofficial efforts to build bridges between Iraqi youths and their Jewish compatriots, to revive a 2,700-year Jewish legacy in Mesopotamia.

Joseph Braude, an expert at the Washington Institute and one of the founding members of the institute, said, "We are not alone in affirming that diversity can be a source of energy and strength. But in the Arabic-speaking world today — where some of the most diverse societies in human history are rapidly becoming monolithic — we are a very rare organization indeed."

Braude, whose mother is an Iraqi Jew, continued, "What makes us rare is that beyond merely diagnosing the problem of a lost diversity, we actually intend to do something about it."

Hormi believes the institute will pave the way for the elimination of negative stereotypes of different faiths and help to configure a more balanced view of religious minorities. Such goals will be achieved through investing in the roles of distinguished clergymen and raising public awareness in Iraq around the harmful effects of hate speech.

"We are motivated by love and concern for the future of this region and united in determination to salvage and reinstate the principles of tolerance and compassion," added Braude. "The challenge we have chosen is a hard one. But I know that working together, and with God’s help, we will succeed."