The minorities in Iraq are subject to religious restrictions in the areas controlled by the Islamic State, which might lead to their extinction. 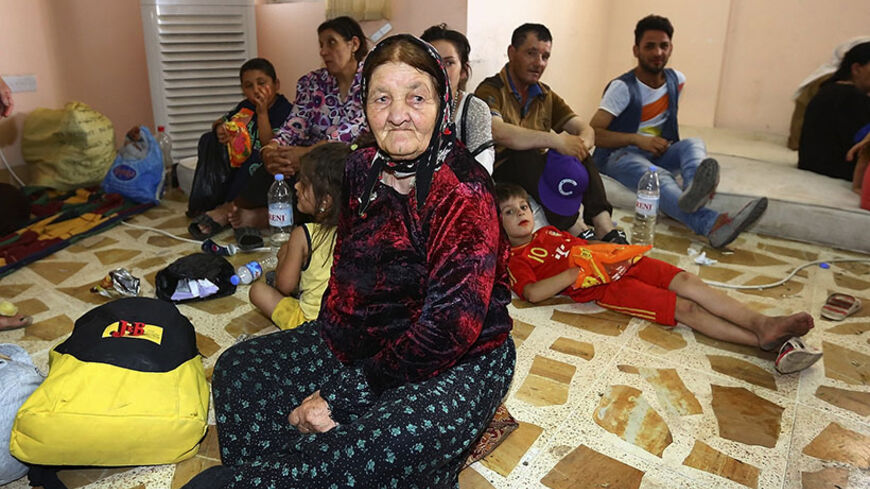 Christian families, who fled from the violence in Mosul, gather at a building in Erbil, June 26, 2014. - REUTERS

The continuing conflict between Sunnis and Shiites has caused significant negative effects on minorities in Iraq. During the recent setback, many Christian areas have fallen under the control of the Islamic State (IS, formerly known as the Islamic State of Iraq and al-Sham, or ISIS), which is known for its religious radicalism toward religious and sectarian minorities. The minorities living in these areas include various Christian communities, the Yazidis and the Shabak who are close to Shiism. Most of these minorities reside in the Ninevah plains, to the northeast of the city of Mosul. In addition, Shiite Turkmen live in the city of Tal Afar, 70 kilometers (43.5 miles) northwest of Mosul. All these minorities also have a presence in different districts of Mosul itself.

When they first controlled these areas, militants did not view minorities in a hostile way, nor did they seek to impose religious restrictions on them. Yet, it quickly turned out that the entire region was under the submission of IS, which aspires to impose its radical religious perception in the areas under its control, particularly after the announcement of the Islamic caliphate.

Recent reports have revealed great massacres against different religious minorities in these areas, which Hanin al-Qadu, head of the Iraqi Minorities Council, described as a genocide against them. IS had posted videos showing the arrest of hundreds of minorities, especially Yazidis and Shiites, and their mass execution.

Al-Monitor contacted a civilian minority leader in al-Kosh, 45 kilometers (28 miles) north of Mosul, to inquire on the situation of these groups. The source insisted not to be identified in the report, as armed gangs would kill anyone who makes such contacts.

The source said that after the announcement of the Islamic caliphate, minorities are threatened with extinction, because of the rulings IS has started to apply, including the expulsion of all adherents of minorities, including Christians, Yazidis and Shabak, from public departments in Mosul. IS has even imposed on the latter the choice of either converting to Islam or paying the Jizya in exchange for their safety. Moreover, all empty houses and properties of Christians, Shabak and other minorities who have fled the city fearing for their lives, were seized. Reports say that nearly two-thirds of the Christians have left their areas in the Ninevah province. The minorities who were displaced from Mosul know that they can no longer return, as their lives are threatened. IS has replaced the crosses on the churches’ domes with its flags and ordered to remove non-Islamic flags from public places. Many kidnappings, including the abduction of two nuns and three orphans under their supervision, took place. This is added to other general restrictions against minorities, including banning women from working in places where men are present and forcing them to wear a niqab outside the house.

In an interview with Al-Monitor, Father Amir Jaji, the provincial vicar of the Order of the Dominican Fathers in the Arab world and a member of the Pontifical Council for Interreligious Dialogue in the Vatican, said that minorities suffer from a lack of interest by all parties and lack any protection from the genocide they are subject to in the IS-controlled areas. He added that minorities are being used as scapegoats in conflicts among powerful parties in Iraq, and have become collateral victims in the settling of scores and conflicts between large denominations.

The other major problem concerning minorities is that they often reside in border areas among large denominations in the country, which puts them at all times at the forefront of bloody wars in the conflicts between powerful parties. The three major denominations in the country have often clashed over these areas, most notably the Ninevah plains, as Baghdad and the Kurdistan Region of Iraq are disputing this area, and Sunni groups are demanding the establishment of a region or state that is independent from Baghdad.

The large religious and nationalist diversity makes the situation even more complicated in those areas, which results in many minorities not affiliated with any major community to be protected, while at times they are abused by the other parties. One of the most prominent examples is the Shabak people, who are affiliated with the Shiite community, yet close to the Kurdish culture. Eventually, they are, however, deprived of any protection from both parties.

All this makes the solution difficult for minorities, as they are torn between two choices: remaining in this situation, which implies their quick annihilation, or being annexed to Iraqi Kurdistan, which, in both cases, means remaining at the forefront of the conflict, as the other two denominations will not accept that.

This tragic situation may reraise an old suggestion regarding the need for international parties to establish a protected area, especially for minorities in the areas they live in, so as to keep them away from the devastating effects of the current wars against them that might lead to their complete extinction in Iraq in the near future.