Following the advances made by the Islamic State in Iraqi areas with large minority populations, there are widespread calls for arms and international protection. 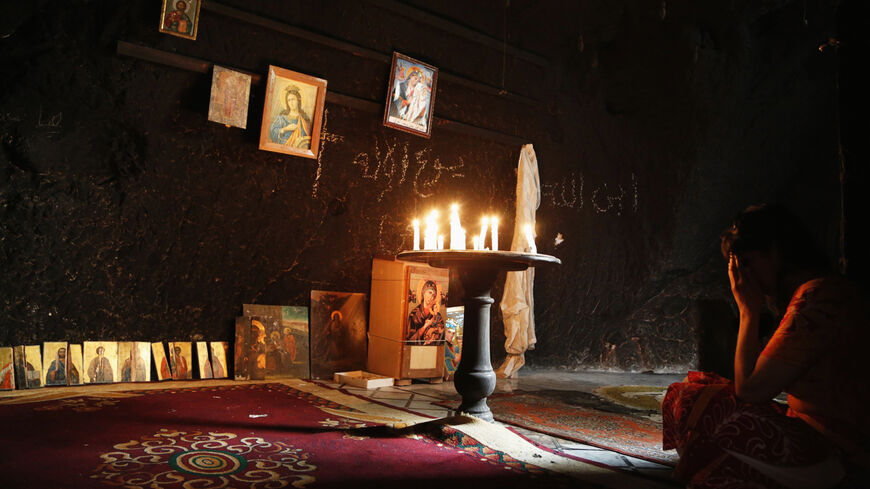 A woman prays inside a damaged church in Maaloula, Aug. 21, 2014. - REUTERS/Omar Sanadiki

Following the huge regression in the situation of Iraq's minorities after the Islamic State (IS) took control of many of the regions where they reside, they were left with no choice but to call for being armed and trained to protect themselves from the attacks they have witnessed from extremists. This call has not been limited to arming a specific minority, but rather became a mass call advocated by leaders, political parties, activists and individuals in various ways.

On Sept. 7, Hadi Baba Sheikh, the chairman of the Supreme Yazidi Spiritual Council, called on the international community to arm the Yazidis in the Sinjar Mountains to confront the danger of IS militants, who still control the city of Sinjar. He also called for the establishment of a safe region in the plains of Ninevah province, which is characterized by vast religious and ethnic diversity. This area is one of the regions disputed by Baghdad and the Kurdistan Regional Government (KRG), and IS controls most of it. On Aug. 5, hundreds of Yazidis held large demonstrations in the cities of Dahuk province, demanding that they be granted arms to defend their regions.

The Iraqi Turkmen Front called on Aug. 17 for arming the Turkmen and forming a volunteer force to fight IS, which controls some Turkmen regions such as Tal Afar, and other areas including Amerli. While Amerli recently emerged from the siege, it is still at risk of takeover by IS because it is on the front line of clashes.

As for the Christians, they have previously demanded international protection and arms so they can defend themselves. These calls increased following the fall of Mosul. IS seized their properties and expelled them, while some were killed at the hands of this extremist organization. On Aug. 18, Chaldean Patriarch Mar Louis Raphael I Sako called for the deployment of "international forces, which would be assisted by Christian recruits, to protect Christians and [allow them] to return to their homes." This is particularly needed because their culture is not one of fighting, and the nature of the land does not help them to fight. It is characterized by plains and there are no mountains or caves.

"The world has forgotten us. We direct messages daily at [foreign] states, but no one answers," the patriarch said. "Iraq Christians are afraid, and their existence is threatened. There are about 120,000 displaced people who will later leave to Western countries." He called on the Christians of Lebanon, Syria and the rest of the region to unite and support Iraq's Christians to stay in Mesopotamia. Whenever waves of Christians leave, it will weaken the position of the rest.

The idea of arming Christians has been a topic of dispute in the past, even among Christians themselves, as it reminded them of the calls for secession in the early decades of the 20th century that ended in bloody massacres. Today, however, a comprehensive agreement has appeared among various sects. Furthermore, others concerned with the situation of minorities have agreed on the need to find a powerful entity to protect the minorities, including Christians on Iraqi lands.

Al-Monitor spoke with Lara Yousef Zara, a Chaldean political and civil activist from the city of Gosh, on the front line of clashes between Kurdish forces and IS. She said it was necessary to secure international protection for Iraqi minorities and arm them, until Iraqi forces can completely control the situation and permanently restore stability and security in Iraq.

She also said the Christians' call for arms and international protection did not stem from a sectarian or confessional position. Rather, it is because they are at risk of genocide, given their small numbers and vulnerability.

For her part, Nahren Anweya, an Assyrian-American activist of Iraqi descent, said that the Christians of Iraq were the indigenous peoples of this country, and their history dated back more than 6,000 years. Thus, they are the most deserving of support and assistance from the international community to maintain their entity and historical identity in their country of origin. Meanwhile, the United States is providing military support and assistance, among other aid, to everyone, except these indigenous peoples. Iraq's Christians have no history of any aggression on others, despite having been subjected to dozens of massacres and genocides by different parties.

The time has come for the international community to listen to the justified humanitarian claims of the Christians to make the Ninevah plains an international protectorate, and to arm the people of the region as much as possible. This will prevent the termination of their presence in Iraq, which has become a likely occurrence in the near future.

She added that what the Christians are demanding does not fall within the context of hostile relations with other components, nor is it a plan to separate from Iraq. Rather, they are demanding the establishment of a special region for minorities on their historical lands in the Ninevah plains, within the context of a unified Iraq and good relations with all other parties in the country.

Saad Salloum, an Iraqi researcher specializing in minorities, discussed the idea of creating a special region for minorities in Iraq in his book "Creative Diversity." He criticized the idea on the grounds that it would lead to a fragmentation of the region and provide a pretext for the expulsion of minorities from other Iraqi areas and gathering them in the Ninevah plains, which would facilitate their later extermination.

Al-Monitor spoke with Salloum about these fears: Do they still exist, or is there a new situation that must be dealt with in a different way? He said that what they were afraid of has already happened. And what is expected is much worse. The continuous threats against minorities, as well as the loss of sufficient protection for them, has led to Iraq being emptied of them. It seems that the scenario of Iraq's Jews is being repeated with the Christians, Yazidis, Mandeans, Shabak and other Iraqi minorities.

He added that minorities are leaving Iraq in large numbers and in tragic humanitarian conditions that will leave their devastating effects on Iraqi society as a whole. In light of these conditions, there is no room for talk about leaving these minorities at the mercy of the Iraqi forces or the peshmerga, which left them under the barbarism of IS and without any protection or assistance. Thus, the idea of establishing a Ninevah plains region to secure international protection and arm the people of the region from the various forces is the only solution to protect minorities' lives and entities. It will also prevent other massacres against them that would permanently end their presence in Iraq.

“The Iraqi Constitution strongly supports the idea of Iraqi minorities obtaining a local administrative authority within a unified Iraq. This will facilitate the future re-entry of minorities into other regions of Iraq,” he said.

Accordingly, the demand of Iraqi minorities that they be armed and obtain international protection is a humanitarian demand that is justified both legally and practically. This would support stability in Iraq and be in the interest of Iraqi society as a whole, including all of its components.