The arrival of Iraqi Christians in Lebanon is significant, as the country has historically been considered a safe haven for Christians in the Levant, and requires considerable diplomatic support from religious and political authorities in the region. 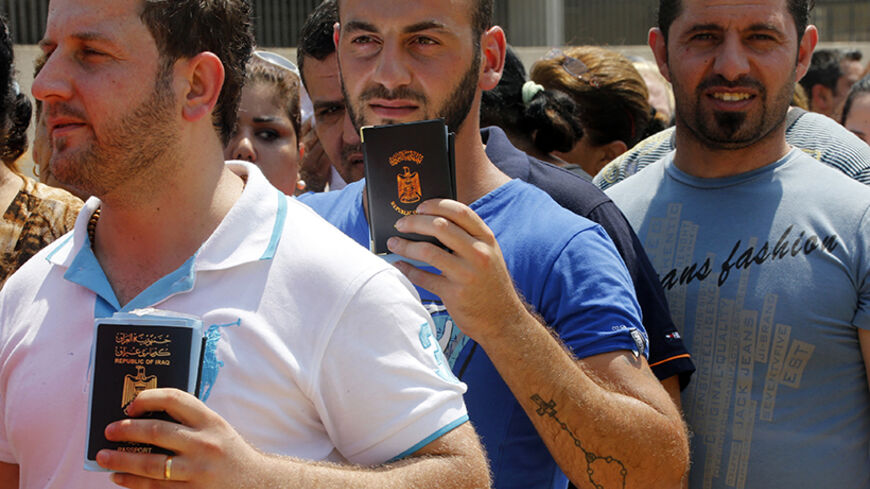 Iraqi Christians displaced by the violence in their country wait in line to receive aid from a Chaldean Catholic Church truck in Beirut, Aug. 13, 2014. - REUTERS/Mohamed Azakir

The expulsion of Christians from cities in northwestern Iraq at the hands of Islamic State (IS) militants is still resonating and felt throughout Lebanon for different reasons. The first is that Lebanon comprises the largest number of Christians compared to other countries in the Levant. Second, Christians assume leadership positions in Lebanon, allowing them to raise issues, take a stance and make demands, a luxury that Christians in neighboring countries do not enjoy.

In addition, the churches concerned with the tragedy of Christians in Mosul and the Ninevah Plains — such as the Chaldean, Assyrian and Syriac churches — are currently all located in Lebanon in terms of religious headquarters, followers and religious officials. The presence in their homeland has become very limited and mostly silent. For these reasons, a meeting was held on Aug. 7 at the summer headquarters of the Maronite Patriarchate in Diman, a village in the north of Lebanon, which was attended by all the Levantine patriarchs.

The meeting raised three issues: the developments in Gaza; the battles in Lebanon’s Arsal between the Lebanese army and the armed Sunni fundamentalists; and the tragedy of Christian displacement from Mosul and the Ninevah Plains. Sources who participated in the meeting told Al-Monitor that the first two issues took no more than a few minutes. The articles related to them were already prepared for the draft statement that was issued after the meeting.

The discussions were, however, focused on the Iraqi incidents. The same sources said, "The interjections of religious officials stressed to identify the parties responsible for the tragedy that has befallen the Christians of Iraq since 2003.”

The participants were clear in blaming it on the repercussions of the US occupation, and the current violent and extreme inclinations characterizing political Islam. The finger was also pointed at Iraq's neighboring countries, some of which are involved while others are accused of ignoring the situation. Some countries are also trying to achieve political gains at the expense of the tragedy taking place.

The sources said the participants expressed “strong dissatisfaction toward the Western silence and the inability of the international community to stop the crimes against humanity that are committed freely and with impunity.”

Subsequently, religious officials accused some Western countries of plotting against the Christians of the Levant, while drawing on old but well-known theories. These theories link to many factors such as the influence Israel has over some Western countries, and the potential Israeli interest in establishing pure sectarian entities. This comes in addition to Western interests to court oil-rich Islamic states, despite the latter’s discrimination against Christians living in their countries, which creates a model for extremist movements to follow. Although religious officials had different opinions about this theory, they all agreed on refusing the French stance that seemed to lure Mosul’s Christians into leaving their homeland. The officials considered the French position as a blow to the Levantine Christian stance.

For his part, the head of the Chaldean Catholic Church in Lebanon, Bishop Michel Kassarji, informed Al-Monitor about the steps that can be adopted to help with the tragedy in Mosul and Ninevah. He said, “During the meeting, the heads of the churches have discussed all the possible methods to help. … A preliminary idea was adopted, stipulating that patriarchs visit Baghdad as soon as possible, within a week maybe, to discuss with the Iraqi government the situation of Christians in Iraq. The high-ranking delegation may also visit Erbil for the same purpose.”

He added, “The patriarchs know that the fate of Christians in Iraq, or those who remained out of the 1.5 million Christians, relies on the stance of different countries around the world. This is why they are thinking of visiting all these countries, from Tehran, Riyadh and Ankara, to Western countries.” Some proposed staging protests in front of the UNESCO headquarters in Paris against the demolition of Iraqi archaeological sites that are on the World Heritage List, to incite the international public opinion to try and save buildings in case it would be impossible for human lives to be spared. Moreover, the cooperation with the Ministry of Foreign Affairs in Lebanon will continue in regard to its announced plan to follow up on the issue.

On the humanitarian level, the deputy patriarch of the Syriac Catholic Church, Bishop Youhana Jihad Battah, told Al-Monitor, “The humanitarian tragedy of the displaced exacerbates by the day, especially after IS militants reached the heart of the Ninevah Plains and occupied the Christian villages there, including Qaraqosh.”

He said, “The displaced did not have identity cards or passports, as IS forced them to leave empty-handed, or else they would have left Iraq. This, however, compelled them to stay and move to the Christian villages of the Ninevah Plains, the mountains of Dahuk and the Christian-dominated suburb of Ankawa, adjacent to Erbil.”

In the same context, Kassarji said, “Approximately a hundred Christian families from Mosul that were able to reach Beirut recounted the tragic situation. Their situation is dire and the only place they could resort to was the headquarters of the Chaldean Patriarchate near Beirut.”

Religious officials are incessantly talking about the latest developments in the plight of Christians in Islamic countries. They are torn between the silent knowledge that this will not be the last chapter and that Islamic fundamentalism will root Christians out of the Levant, and the deep faith that the Holy Spirit, who protected Christians for 2,000 years amid heinous horrors, will keep them in the region for longer. Which of these will prove to be right? The answer might come sooner than expected.