The Lebanese Foreign Ministry has taken up the cause of the uprooted Christians of Iraq, calling on international organizations to intervene. 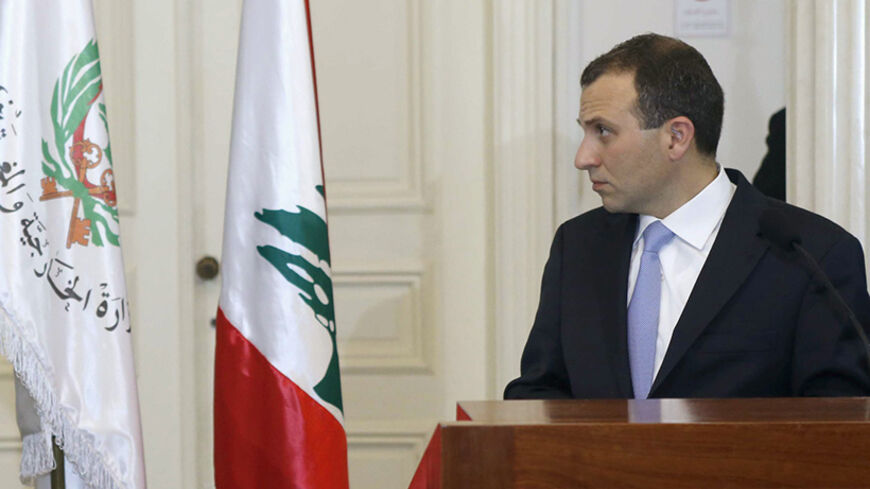 Lebanon's Foreign Minister Gebran Bassil looks on during a news conference in Beirut, May 29, 2014. - REUTERS/Mohamed Azakir

The tragedy that befell the Christian population in Mosul has raised concern in Lebanon, leading to a state of alert on the ecclesiastical and official levels and daily meetings on the matter. After the Islamic State (IS) threw out the Christian residents of Mosul, Lebanese ecclesiastical institutions and the Ministry of Foreign Affairs — which is led by Gebran Bassil, a Christian minister representing the largest Christian parliamentary bloc in Lebanon — have been in a state of frenzy. The flurry began on July 23, when church representatives concerned with the crisis in Iraq met in the headquarters of the Syriac Catholic Patriarchate in Beirut.

Habib Efrem, the secretary-general of Christian Associations in Lebanon, was tasked with coordinating the work of the church’s "crisis cell," which is following the Mosul case closely. He told Al-Monitor that what happened in Mosul was a real humanitarian tragedy, but it's even more dangerous for the case to not be accorded the attention it deserves. Efrem said that two weeks ago, 15,000 Christians were living in Mosul. Today, according to the data from the Syriac Catholic Church, there are less than 20.

The 20 Christians who could not flee are elderly. This is why they chose to stay and declare their conversion to Islam, as demanded by IS, to escape death. The rest of Mosul’s Christian population joined the 17,000 Christians who are now living in the villages of the Nineveh plain.

Efrem informed Al-Monitor that the participating Lebanese churches have set political, humanitarian and diplomatic plans to highlight the most recent case of displacement in the region, currently met with eerie international silence. In the next few days, a delegation from the Vatican will come to Erbil to follow up and learn of the situation of the displaced Christians. Efrem said that the IS militants were only 2,000 km (1,200 miles) away from the hosting village of Qaraqosh, or Bakhdida, as its is known to Muslims. The situation is still precarious and the tragedy there may deteriorate into violence if the extremists advance north.

The Lebanese Foreign Ministry is in a similar state of alert. Bassil called the representatives of churches to offer all the help the ministry is capable of providing. Official circles affirmed to Al-Monitor that a crisis cell was set up in the ministry to follow up on the urgent humanitarian crisis.

The ministry decided to adopt a series of diplomatic and political steps. Sources in the ministry affirmed to Al-Monitor that the minister of foreign affairs is preparing to present to the cabinet a comprehensive plan around the following points:

First, the Lebanese government will officially demand that Fatou Bensouda, the general prosecutor of the International Criminal Court (ICC), investigate the possible crimes against humanity against Christians in Iraq and Palestinian civilians in Gaza.

Sources in the ministry told Al-Monitor that Lebanon was not among the signatories of the ICC’s Rome Statute; however, a legal analysis prepared by the ministry showed that the Lebanese initiative could still be applicable.

Second, Bassil will invite the ambassadors of the five permanent members of the UN Security Council, the representative of the UN secretary-general in Beirut and ambassadors from the EU and the Vatican to hold a meeting dedicated to the issue of Iraqi Christians.

Third, Bassil will visit Baghdad, Erbil and the Christian villages in the Nineveh plain to learn more about the tragedy of the displaced and promote their cause in the media and on the international scene. According to the ministry sources, Bassil is already planning this visit, scheduled for after the Eid al-Fitr holiday, despite the precarious security situation.

Fourth, Bassil will call UN Secretary-General Ban Ki-moon, who is currently visiting the Middle East, and invite him to Beirut to discuss with church representatives the responsibilities of the international organization toward this crisis. If it is not possible for Ki-moon to visit Lebanon, Bassil plans to schedule a meeting in Amman.

“All means should be used to help the victims of this tragedy,” Efrem told Al-Monitor. “All political choices should be available to preserve their lives and presence. [This can include] the forming of an Iraqi province in the Nineveh plain or the reinforcing of the official militia of Kurdistan’s Christians, which was formed two decades ago, as is the case with other groups that were at the time subject to persecution at the hand of Saddam Hussein. What is important is for Christians not to be rooted out of their country.”

Although Lebanon is directly affected by internal and regional issues, defending the minorities of the region is one task that it doesn’t seem ready to fulfill — a role that Bassil has already taken on.