Lebanon's foreign and labor ministers are extremely worried about the consquences of Lebanon's hosting of Syrian refugees, particularly in light of the June 27 suicide bombings in the Bekaa Valley. 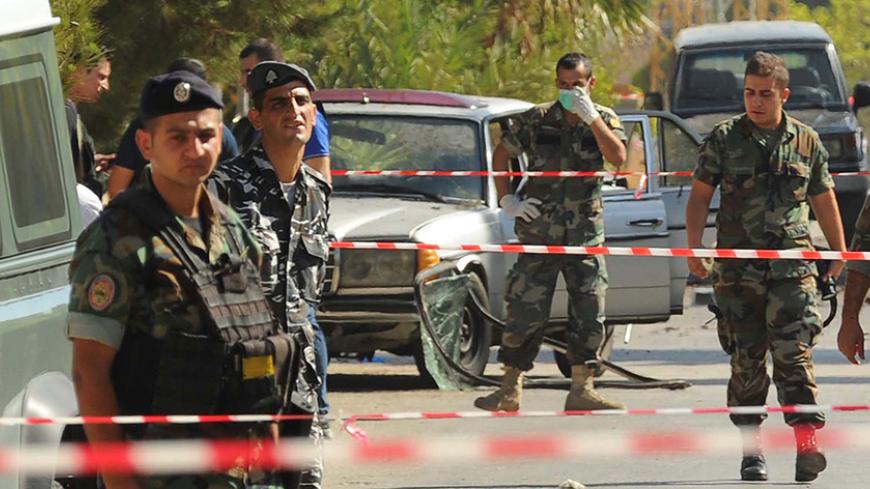 Lebanese army soldiers and policemen secure the area at the site where suicide bomb attacks took place in the Christian village of al-Qaa, in the Bekaa Valley, Lebanon, June 27, 2016. - REUTERS/Hassan Abdallah

On June 27, a series of suicide bombings rocked the eastern border town of al-Qaa in the Bekaa Valley. For the Lebanese people, this was the straw that broke the camel’s back, as the attacks reopened the debate over the issue of displaced Syrians in Lebanese territory.

This stirred a wave of panic. Various stances were taken on social media by Lebanese citizens, who expressed racist feelings against the Syrian refugees, including calls to expel from Lebanon all displaced people.

Two days after the al-Qaa attacks, Lebanese authorities rushed to impose special measures on the displaced. A night curfew was imposed on Syrian refugees, and the Lebanese army announced the arrest of more than 412 Syrians on various charges.

The Cabinet held an extraordinary session June 28, but no conclusive results were reached. However, the issue of displaced Syrians was brought back to the government's table several times, based on the need for a radical solution and a comprehensive approach.

Foreign Minister Gebran Bassil and Labor Minister Sajaan Azzi began raising the issues of Syrian refugees well before the June 27 blasts. Since the outbreak of the Syrian war in 2011 and 2012, Bassil has spared no occasion to raise the issue of the risks of the Syrian exodus to Lebanon. Indeed, less than 24 hours before the attacks, Bassil had called for strict measures against all displaced Syrians. The suicide bombers lived in refugee camps in al-Qaa and were Syrians, according to Lebanese authorities.

On June 26, Bassil spoke at a general conference of the elected members of municipalities affiliated with the party he heads, the Free Patriotic Movement. He called on the municipalities to prevent Syrians in their areas from violating labor and housing laws. He also called for periodic inspections of any Syrian gatherings.

After the al-Qaa attack and the Cabinet session, Bassil told Al-Monitor that he wished the bloody events had not confirmed his warnings of recent years.

He added, “But what happened is a strong motivation for us to continue to raise our voices, both locally and internationally, in order to spare Lebanon an explosion ensuing from the Syrian displacement crisis. The risks now affect all walks of life — our security, economy and environment — and even threaten the existence of Lebanon as a whole.”

Azzi had also spoken about this threat at the Cabinet. Along with Bassil, he had called on the Lebanese government to coordinate with Syrian authorities in order to ensure the return of Syrians who do not meet the conditions of humanitarian displacement.

But the Sunni majority in the government disapproves, under the excuse of refusing coordination with the Syrian regime.

Azzi told Al-Monitor, “We are not taking a stance on Syrian events. We just want to prevent the spillover of these events to our country. Therefore, we must coordinate with Damascus to protect our country. This is not about granting one party or the other legitimacy.”

He added, “Syria is a member of the United Nations organization. The representative of the UN secretary-general is moving back and forth between Beirut and Damascus. Moreover, Syria has an official ambassador in Beirut. So how can we, despite all of this, refuse coordination with Damascus authorities, even through an intermediary, in order to ensure the return of Syrians to their country and thus protect Lebanon?”

Is the ultimate goal behind raising this issue to generalize the terrorism stereotype on all displaced Syrians? Azzi believes this is an opportunity to raise the issue again, in light of the international tendency to do the same. He does not oppose Bassil’s opinion.

Azzi told Al-Monitor that this has nothing to do with what happened in al-Qaa, as he brought up the matter weeks ago. “I raised this issue specifically after my return from a business trip to Geneva in early June. There I saw very serious indicators for Lebanon. Therefore, I met with senior international officials involved in the crisis of Syrian displacement to Lebanon. I found out that none of them were thinking about how to get the displaced people to return to their country. Discussions rather revolved around ways to accommodate the displaced people in Lebanon, to provide them with housing, education and jobs. This is considered an international approach to have the displaced Syrians settle in Lebanon. It is true that the international community cannot nationalize these refugees, but it is trying to keep them in Lebanon.”

When asked about the identities of those officials, Azzi answered, “I met with Michael Muller, one of [UN Secretary-General] Ban Ki-moon’s assistants and an executive director at the UN. I also met the director of the United Nations High Commissioner for Refugees Filippo Grandi, as well as Guy Ryder, director of the International Labor Organization. I reached my conclusion after my discussions with these officials and with many others. This is what pushed me to warn them that if the Syrian refugees remain in Lebanon, the country is bound to face a demographic, economic and environmental disaster, not to mention the security and terrorism threats.”

He said that “1,170,000 people in Lebanon are living under the poverty line; 460,000 people are outside the labor market, with an unemployment rate of 25%. Lebanon’s population density stands at 560 people per square kilometers. All of this indicates that the attempt to settle the Syrians in Lebanon would inevitably lead to an explosion in the country.”